NB Commentary: Sharing this article from Atlanta Black Star. A must read speaks to the disparity between the needs that vary between White and Black Feminism movements. SOURCE 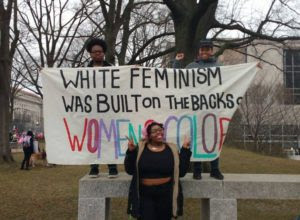 Just one day after the inauguration of President Donald Trump, an estimated 470,000 people (and millions more across the United States and the world) flooded the streets of Washington, D.C., for the first Women’s March on Washington.
Men, women and children — but mostly women — turned out for the historic march on Saturday, Jan. 21, to stand up for women’s rights but also to protest against newly inaugurated President Donald Trump, who made a series of overtly misogynistic remarks during his campaign.
Millions ultimately gathered to unify under the umbrella of feminism, civil rights, immigration and environmental activism, among other issues. However, many Black female organizers and intellectuals had their doubts about the march meeting the needs and concerns of Black women.
Old rifts between Black women organizers and the white feminist movement began to arise soon after the idea for the Women’s March on Washington was announced. The New Yorker reported that the idea for the march was credited to Teresa Shook, a retired white lawyer who resides in Hawaii. After Trump’s surprising presidential win, Shook launched a Facebook event page suggesting a protest. Word of her anti-Trump idea quickly spread, garnering more than 10,000 supporters overnight.
Shook initially called her event the Million Woman March, a moniker originally attributed to a massive protest for Black sisterhood and self-determination held in Philadelphia in 1997. The retired attorney eventually changed the name of her rally, but some Black women still weren’t convinced and accused white women’s rights advocates of appropriating movements started by Black women.

“The many mistakes inherent at all levels of organizing the Women’s March event from very early on demonstrate the very problematic nature of  ‘white feminism,’ ” Jalessah Jackson, a Gender and Cultural Studies major working on her master’s at Simmons College in Boston told Atlanta Black Star. “That is, white feminists’ tendency [historically] to align themselves with white supremacy to achieve their own goals.”
“What we see happening is white women tokenizing and using women of color to advance their own agenda,” Jackson continued. “I don’t think that’s genuinely intersectional. I’m not interested in faux solidarity or intersectionality being merely an afterthought.”
The “intersectionality” Jackson spoke of is a term coined by African-American feminist and legal scholar Kimberlé Crenshaw in 1989 and is the concept of inextricably linked facets of race, sex, gender identity and economic status.
The galvanizing issue behind the march was the election of President Trump, who walked to victory with 53 percent of the white female vote. But could white women who couldn’t convince other white women to vote against Trump now center themselves in the “resistance” against his policies?
Many African-American women questioned why they should respond to white women’s call for human rights when they felt their own calls had gone unanswered. Historically, African-American women’s rights advocates have taken issue with the feminist movement overall, highlighting its sometimes racist and exclusionary practices. Was this present-day equality march tumbling down the same rabbit hole? Was it catering to the anxiety of white women over Trump’s victory, while bypassing the real concerns Black women (and communities) have been organizing around for centuries without the resources or support from the people now jumping in front of the line?
Lastly, if Hillary Clinton had won the election and broken the glass ceiling, would there still not be a need for a march to make sure Clinton was clued in that women, particularly Black women, would still be facing income and wealth gabs, police and incarceration issues, terrible public education policies, as well as reproductive rights issues?
Columnist Jamilah Lemieux addressed these concerns in an op-ed piece for ColorLines on Tuesday, Jan. 17. In it, Lemieux explained that she wouldn’t be participating in the Women’s March because she didn’t see the point in “putting my body on the line to feign solidarity with women who, by and large, didn’t have my back prior to November.”
“When I learned that some of those women had decided to channel their disappointment into a ‘Million Women March,’ my twisted moment of pleasure quickly gave way to a familiar sense of annoyance,” she wrote. “Once again, the labors of Black folks (in this case, the 1995 Million Man March and the 1997 Million Woman March organized by Minister Louis Farrakhan and the Nation of Islam) were being co-opted and erased by clueless White ones.

Correction: The Million Women’s March grassroots approach to organizing involved Black women sharing information through groups such as Alpha Kappa Alpha, Black media and word of mouth. Organized by Phile Chionesu and Asia Coney, that march focused on the idea of Black women supporting each other. Speakers had included Jada Pinkett Smith, Sistah Souljah and the daughters of Malcolm X. Assata Shakur also read a message from Cuba. People marching held signs that read “I am one in a million,” and “Black Women: No more AIDS, abuse, addiction,” according to CNN. http://www.phillytrib.com/news/local-women-to-rally-for-women-s-march-in-d/article_850a3906-51da-53cc-84de-93fed0a4587e.html

“Will the Women’s March on Washington be a space filled primarily with participants who believe that Black lives matter?” Lemieux added. “I’m not sure.”
Black women’s rights advocates like Lemieux and others who spoke out against the march’s lack of intersectionality and called for more inclusivity were quickly deemed “divisive” and destructive to the vision of feminist solidarity. White feminists condemned African-American, LGBTQ, and Muslim activists who dared to speak up when their interests were forgotten or ignored, creating what critics called “conflict.”
“The attempted hijacking of the march’s agenda and all the nasty tit-for-tat between white vs. black/queer/Muslim/trans and other identities tells a very disturbing story about the divided state of feminism today,” contributor Emma-Kate Symons wrote in an opinion piece for Women in the World. “It saddens me to see the inclusive liberal feminism I grew up with reduced to a grab bag of competing victimhood narratives and individualist identities jostling for most oppressed status.”
Jackson countered Symons’ argument, however, by pointing out how white feminists who supposedly care about the rights of ALL women failed to rally behind Black female victims of police brutality. She added that white women’s rights advocates have a tendency to pick and choose whose female rights they care about.
“Most of the women who marched pat themselves on the back and go back to ignoring women who reside at the intersections of multiple identities,” Jackson told ABS. “Identifying these issues is not being divisive. I believe that in order to affect social change, we must identify what hasn't been working in order to fix it.”
Some of these issues were resolved or at least finagled by including experienced nonwhite women organizers and activists in the writing of the guiding vision of the march, including them in the list of speakers and having them help lead the organizing process after the rocky start.
The Women’s March was a historic success in bringing out the masses, with far more people turning out for the protest than for Trump’s inauguration, according to The New York Times. But as the feminist movement struggles to become more diverse and open, many concerns need to be addressed, such as leadership, resources and the next steps in creating a viable “resistance” to Trump’s agenda. Moreover, there’s a need to tackle the liberalism of the historic feminist movement, which has too often fought for a place for white women at the expense of Black ones.

http://atlantablackstar.com/2017/01/24/historic-womens-march-controversial-black-women/
The original women’s march took place in Philly 20 years ago
Hundreds of thousands took to the Parkway
BY MELISSA ROMERO  JAN 19, 2017, 10:30AM EST
http://philly.curbed.com/2017/1/19/14312658/original-philadelphia-million-woman-march-1997
Two years after the Million Man March, two grassroots activists organized the Million Woman March in Philadelphia for black women to come together and address the ills in their communities. They walked for two miles past symbolic settings, including the Liberty Bell and City Hall, spilling onto the sidewalks of Benjamin Franklin Parkway and up the steps of the Philadelphia Art Museum.
http://www.latimes.com/nation/la-na-pol-womens-march-live-before-the-women-s-march-on-washington-1484942715-htmlstory.html
Some also took issue with the name Shook had proposed, the Million Woman March, which was the name of a 1997 black women's march in Philadelphia. The racial concerns set off a heated conversation on the group's main Facebook page, with some African-American women especially taking umbrage.
http://www.philly.com/philly/news/politics/presidential/It-started-with-a-retiree-Now-the-Womens-March-could-be-the-biggest-inauguration-demonstration.html
Tags: atlanta, black, donald, inauguration, march, million, presidency, star, trump, washington
★
★
★
★
★
Votes: 0
E-mail me when people leave their comments –
Follow