0
NB Commentary: I attended a predominately white high school and college. Them white folks loved to say they were French, German and Italian mixed. They knew their mother's lineage and their father's. They would tell you that before they would even say "American". They were proud of their heritage even if they had been here four or 5 generations. Some of them knew their names before they changed them to more Anglo names, particularly the Polish, Russian and Germans.
What happened to Africans was that they were also very aware of their ethnicity before they were captured and brought out of Africa. They were Ibo, Hausa, Fulanai, Ashante, Zulu, San, Fante, etc. Africa is a continent with 52 countries and it full of diversity. They had their own customs, languages, food, style of dress, etc. just like the German, French, Italian, Polish, etc. 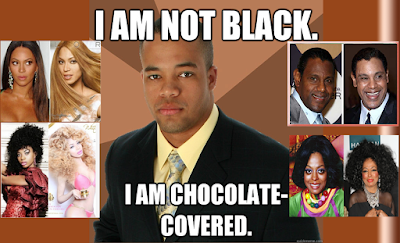 Ethnicity and cultural is what diversified all peoples not skin color.
Enslaved Africans being robbed of their ethnicity and culture, then forced to carry the culture of the oppressor had no other identity but the color of their skin.
Scattered like leaves upon the rushing stream, they ended up every where and nowhere.
Today, with some help from DNA tests which have not been proven to be 100% accurate, African descendant people can begin to trace back to a people, an ethnicity a clan.
However even with that knowledge, having been here for 6-7 generations, African descendant folk have adopted and inculcated the prevailing culture of their oppressor. This culture transmitted and transmuted and continues to do so, the notion of black inferiority. Therefore, like any sane person, those blacks who are offended by this applied inferiority find solace in rejecting being black. 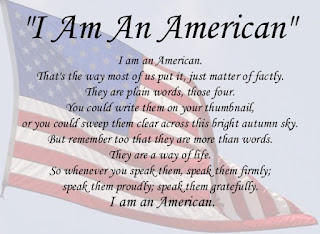 The prevailing culture is American, and it has told the world it is greater than any other. A sane person would want to identify with that notion and reject the inferior one.
Unfortunately all of it is a destructive and almost irreparable lie. In fact, the European has barely maintained his own ethnicity except for a few holidays to celebrate. They may eat their national foods, or attend religious ceremonies surrounded by their own ethnic groups, they may even speak their native tongue in their homes, but it is more ceremonial.
The idea was to create a melting pot where all the rocks melted down to a this 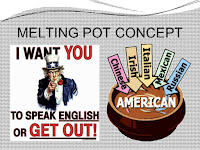 soup of a new culture and identity, and out of this sprung the American. The American  prevailed, ethnicity went to the back burner.
To rob anyone of their ethnicity, white black or brown, is genocide. It creates a mental destabilization and robs a person of their cultural barring that keeps them grounded in an identity, a self knowing so to speak.
While people may want to focus on how the African was robbed of his heritage, that robbery was and is pervasive in American culture.
You cannot reach a high office in this land proclaiming to be Irish, without the American attached. If you ran wearing your ethnic garb you would be chased out of the town meeting. 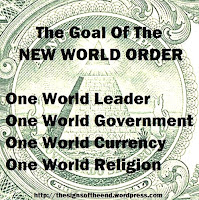 People fail to see the insidious consequences of the NWO on world government. They think it's some elaborate plot that just started a few decades ago. However, it has been going on for centuries. And the secret societies behind this plot know full well that the idea is to create a new human, a one human along with one religion, one government and one currency. A One human who will lose all diversity and have no distinction from any other. A borg, a robot, a drone. They will eat alike, dress alike, talk alike and basically be identical and from any other human. This is control at its highest and most effective state.
So, they create the illusion that diversity is separation, playing on the humans fear of the different and genocide, pit humans against one another and then offer the solution, no ethnicity, no difference, no other culture but the one that is imposed upon all, the Great Melting Pot, where everyone gets along because they are all the same. A complete crock of shit. A garden is most beautiful due to its different flowers. 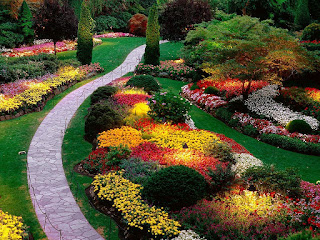 It requires a skilled gardener who knows how to address the different needs of the different flowers. That's too much work for the powers that be, so in order to control everyone, they pull them away from ethnicity to homogeneous way of like. The American hamburger for instance. 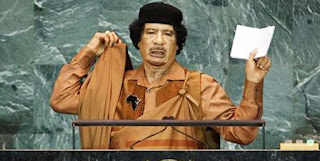 They scoffed at Gaddafi because he was proud of his African heritage and wore his garb gallantly.
The other dignitaries primarily wear the "SUIT "that was designed to show you are civilized. The suit worn by conquerors of foreign lands, corruption politicians and world leaders coalesce and wear these "Suits". There is a really big game that is played on the masses and most of us are barely aware of it if at all.
Thank you for reading my thoughts on this. NB

Links Of Interest:
Light Is Right?? 15 Black Celebrities Accused Of Bleaching Their Dark Skin For Beauty
https://bossip.com/1008294/light-is-right-15-black-celebrities-accused-of-bleaching-their-dark-skin-for-beauty/
Celebs who skin bleach
http://www.w24.co.za/Archive/Celebs-who-skin-bleach-20130410
"Could it be that mainstream media has gotten bored with the typical Caucasian look? Has mainstream media finallydiscovered what we've known all our lives? Even still, with more black women on the pages of mainstream magazines there is still the debate that many of those photos are being air brushed to make the models and celebrities appear lighter in complexion. Remember the Beyonce L'Oreal ad debate?"
http://www.rockitnapptural.com/2010/09/black-and-ethnic-beauty-trend.html
Indeed, the variety of ethnicities in America is often claimed to be the best mix in the world. Leonard Dinnerstein and David M. Reimers introduce their book, Ethnic Americans: A History of Immigration and Assimilation, by stating, “Never before – and in no other country – have as many varied ethnic groups congregated and amalgamated as they have in the United States” . With such reputation, here is exactly where the famous term “melting pot” arises. This conception has traditionally been perceived as the best expression to describe the multi-ethnicity of America. Its basic idea presents the whole nation as one large pot. Anyone who enters the United States is automatically thrown into this “pot” where, for the following years, a process of assimilation into the American belief systems is taken place. All the cultural aspects that one brings into are blended together, or melted, to form a new culture. The outcome of this massive procedure is the “melted” version of a culture, which is described as characteristically “American.” It is notable that in this assimilation, the identities of each original culture are extinguished to bring out a complete new mixture.
https://irdefense22012.wordpress.com/2014/07/14/melting-pot-vs-salad-bowl-an-illustration-of-cultural-diversity-in-united-states-of-america/
Analogies for America: Beyond the melting pot
http://www.startribune.com/analogies-for-america-beyond-the-melting-pot/213593491/
In Reinventing the Melting Pot, twenty-one of the writers who have thought longest and hardest about immigration come together around a surprising consensus: yes, immigrant absorption still works-and given the number of newcomers arriving today, the nation's future depends on it. But it need not be incompatible with ethnic identity-and we as a nation need to find new ways to talk about and encourage becoming American. In the wake of 9/11 it couldn't be more important to help these newcomers find a way to fit in. Running through these essays is a single common theme: Although ethnicity plays a more important role now than ever before, today's newcomers can and will become Americans and enrich our national life-reinventing the melting pot and reminding us all what we have in common.
https://www.amazon.com/Reinventing-Melting-Pot-Immigrants-American/dp/046503635X
“A nation can survive its fools, and even the ambitious. But it cannot survive treason from within. An enemy at the gates is less formidable, for he is known and he carries his banners openly. But the traitor moves among those within the gate freely, his sly whispers rustling through all the alleys, heard in the very halls of government itself. For the traitor appears not traitor, he speaks in the accents familiar to his victims, and he wears their face and their garments, and he appeals to the baseness that lies deep in the hearts of all men. He rots the soul of a nation, he works secretly and unknown in the night to undermine the pillars of a city, he infects the body politic so that it can no longer resist. A murderer is less to be feared.” – Cicero, 42 B.C.
http://www.jeremiahproject.com/the-new-world-order/
An Illustrated History of Hamburgers in America
http://firstwefeast.com/eat/2015/08/illustrated-history-of-hamburgers-in-america
Light Is Right?? 15 Black Celebrities Accused Of Bleaching Their Dark Skin For Beauty
https://bossip.com/1008294/light-is-right-15-black-celebrities-accused-of-bleaching-their-dark-skin-for-beauty/
Tags: african, american, atlantic, black, exceptionalism, multiculturalism, new, order, secret, societies
★
★
★
★
★
Votes: 0
E-mail me when people leave their comments –
Follow