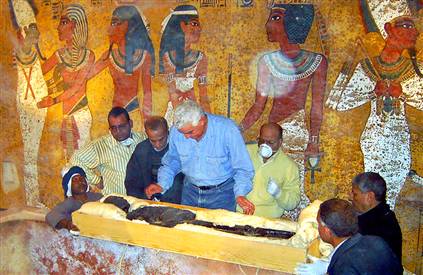 Cheikh Anta Diop courtesy, L'Evenementwww.evenement-bf.net/pages/culture_86.htmWe get so anxious as Black people, Negroes, Coloreds, Nekkros, African Americans, "African-Descended Peoples", Diasporic Tribes, "Children of the Diaspora" or whatever you wish to call us. We as a diasporic people are all of that, and more, are we not? About identity, we are so easily spun off into Cartesian circles of confusion, conflict, doubt, anger, recrimination, and shame.Take the curious case of Baba, Cheikh Anta Diop.No sooner had I mentioned Diop's name in passing in a blog posting of mine than a brief but insistent string of comments on said blog post began, focusing upon Diop, as if my post had been about Baba Diop in the first place. It hadn't. It is a sure thing that if one mentions Diop, like mentioning certain other hot-button Children of the Diaspora such as Francis Cress Welsing, President Idi Amin, Nat Turner, Condoleeza Rice, Papa Doc Duvalier, or Michael Jackson, one will get a response; and that response will very often be very tendentious, as if your mention in passing of these people were the point of your discourse, for, indeed, these figures draw to themselves an animus that will make them be the point. This is so, because Black identity, like Black life itself, is mercurial, fragile, precious, and always under duress. We have very passionate and definite convictions, all of us, about who and what we are. This is as it should be. Diop, whether you honor him or distrust him, believe in his work or decline to so believe, Diop draws our energies to himself--Diop the man, as well as Diop the symbol of ingenious African Manhood. He even bears a resemblance to our fallen Prince, Patrice Lamumba.As I wrote of Diop in a brief 'add a comment' post a while ago:"...it cannot be denied that Diop's work on the African basis of civilization, though perhaps pushed a bit too far by him (the Leaky family projects, and other anthropological and geological evidence of late seem to suggest the possibility that Asia, not Afrika, was the cradle of the hominid homo habilis/homo erectus--of humanity) is brilliant and is valid. He exposed, through his sheer intellectuaism, the biases in previous research on Afrika...."Throughout the 1950s, 60s and into the 70s, research on and scholarship about Africa was crippled by White supremacist racialist 'typing' by Europeans such as Carleton S. Coon--whose "The Races of Europe," published in 1939, brainwashed the educators who taught my generation of public school students, into thinking ancient Europeans were a 'refined product' of racial progression while Africans, as he asserts in his "The Origin of Races," published in the 60's just in time for my generation to be besmirched by him, argues that Africans were ne'er do wells and primitives; in "The White Race and the New World" from 1939, he posits that the White races possess 'maximum survival' potential due to--you guessed it, their superiority--manifest destiny for the dscerning anthropologist. Due to an extant ideology of the 'superiority' of White civilization vs. the assumption of intrinsic 'inferiority' of the cultures south of Mother Sahara, Europeans had throughout the 19th and 20th centuries arbitrarily pronounced an arrangement of hierarchy in which most (sub Saharan) Black cultures were declared 'primitive' while so-called 'advanced' cultures were said to coexist soley because of so-called 'Caucasian clusters' presumed to exist within ancient Afrikan contexts (Egypt was assumed, under this ideology and theory, to be a 'White' civilization sprouted like a saving grace, like a beautiful white rose from amidst the dark detritus, choas, and brutality of surrounding African geography and cultures). Due to people like Coon, the assumption was that progress was brought to North Africa by "Hamitic" invaders (thus is explained, presumably, the Alexandrian period of the Ptolemaic rulers of Egypt who were Greek in origin)--the children of Ham. White people.Egyptian monarchs, under this theory, were Caucasian, and were manifestly dominant over the witless, idle Black races, nations, and tribes of Sub Sahara.Diop's long ago rejection of these European racialists, prefigured in his book, "Nations Negres et Culture" (1954), presaged the later works of liguistic antropologists, geologists, and physical anthropologists of the last thirty years of post-racist research, most of whom have declared the lie that was Coonian dogma.African Archaeological Review published DNA evidence in 2004 which famously verified much of Diop's research and his ideas: European scientists had faked evidence, research, and physical findings in order to buttress their own racist theories about African primitivism.Diop proposed theories about African development in the Pleistocene period which Europeans had tried to theorize was a period of peculiar 'splitting' between two distinct human gene pools and two distinct human races: one 'civilized and developed' and the other 'primitive' and less developed. Diop's work on Nubian civilization specifically is stunning for its implications of very, very ancient Afrikan high civilization predating even Egypt. Right: Nubian pyramids of Meroe courtesy,http://wysinger.homestead.com/nubian105.htmlThis must be said: the recent spate of books, films, lectures, and radio blather cycling all around us about the phenomenal 'discoveries' of the pyramids of Nubia/Kush/present day Sudan, all of it was prefigured by Baba Diop! He was saying it decades ago! If for no other reason, he is to be honored for being the voice in the vanguard of a criminally delinquent western intellectual development.Finally, I'll say this:The efficacy of Diop's work can perhaps be inferred by the much publicized racism of Zahi Hawass, 'Undesecretary of the State of Egypt overseeing the Giza Monuments and the Antiquities'. Hawass denies the Black identity of ancient Egyptians, specifically objecting to the Afrocentrist assertion that Queen Nefertiti was Black. It has been charged by Afrocentrists, that Hawass bears some personal repsonsibility for the continued racist insensitivity toward the tragic loss of ancient archeological materials, artifacts, and evidence of the pre archaic existence of advanced Nubian civilization, through his refusal to acknowledge that the community of scholars he belongs to were instrumental in advocating the flooding of the former Nubian plains by the Aswan Damn project, which created a man-made Lake sinking Nubian architectural and anthropological relics under 200 feet of water reaching from Egypt to Sudan. Egyptian scholars of antiquity like Hawass refused to speak out against the tragedy of the water of that lake obscuring hundreds of Nubian pyrimids--their remains having outnumbered those of Egypt proper. The lake also reportedly led to the forced relocation of thousands native Nubians.Hawass' racism is par for the course. At first glance it may seem to North Americans to be petty on the part of afrocentrists to call him out this way, since he has never lynched anyone, never burned a cross, crescent, or star of david on anyone's lawn, and never called King Tut a 'nigger' (in fact, at an academic conference in Mississippi a few years ago a colleague of mine, a linguist from Georgetown University, a fellow Afrikan American, demanded to know why we "post colonial discourse brothers from Cornell talking all that post modernist and 'Afro-Asian' stuff" were being so hard on Hawass. After all, Hawass is a brother who protects the antiquities of Egypt from the White pillagers with ferocity and great love for the dignity of Egypt's heritage. Yes, he does. True, true, I told him).But there is a subtle nuance to be looked at here, and it relates to all that gets said about, against, and around about Diop: North African forms of oppression are not awlays as overt, as clear-cut as we here in the Anglo western portion of the diaspora are accustomed to. The sheer size and breadth of North America is such that population control is only a crucial issue to the oppressor in the urban centers of the US; for much of the US is rural, is lacking commercial development still, and is marked by vistas (take a road trip across the United States, seaboard to seaboard--north/south or east/west, either will serve--and you will see what I mean). Africa and Asia, Japan, the European centers, and even much of the Caribbean and of Central America are a bit different in this regard: there is less room. Oppression must take population density and population in relation to land mass very seriously. Thus, the management of populations is a special case in places like Egypt, Palestine, South Africa, and even in Great Britain, an entire country that can fit snugly inside Florida, only one of fifty US states.What am I talking about? What has this to do with Diop?Egyptian feminist writer, activist, and psychologist (yes, she is much like Frantz Fanon), Nawal El Saadawi, brilliant author of "God Dies By the Nile" has addressed the nuance I'm driving at. She has denounced the racism and the pacification and nullification that is greatly characteristic of north African forms of authoritarianism, sexism, and racism (as Hanan Ashwari too, has pointed out, and as we see with Israel's peculiar approach to pacification of, removal of, and dehumanization of the humanity of Palestinians in the occupied territories and in Jerusalem). This is exactly why ex PLO member Aida Saad now lives in Dubai and Nawal El Saadawi now lives part of the time in Egypt but part of the time in Brussels, Belgium for 'her own peace of mind,' as she puts it. Left: Nawal El Saadawiنوال السعداوىThe form that racism often takes for North Africans and for others on the continent is the sort of circumspect, parsimonious racism that Hawass exhibits against Blackness, and that Cheikh Anta Diop fought against through the simple act not of carrying a gun, or smuggling guns, but by challenging the intellectual underpinnings of xenophobia, bigotry, and most of all, CHAUVINISM. 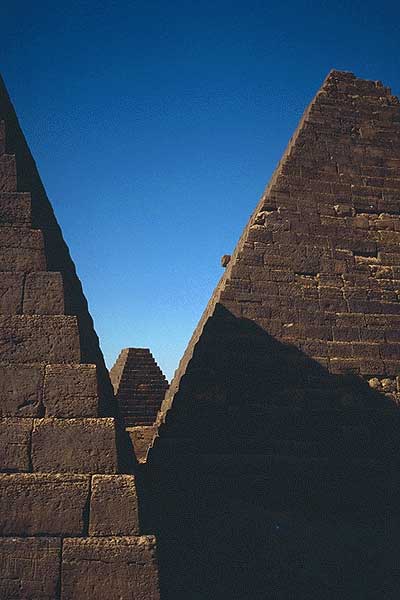 Diop is an important and early voice that long ago began the current fight to win the legitimacy of Black civilization in a nuanced way: by overturning the entrenched, discursive and procedural bigotry toward the very idea that Africans are descended from greatness, from cultures of epic proportion, and from profoundly complex and developed societies that pre-dated the archaic periods of Europe.Right: Pyramids of Nuri, Nubiacourtesy, http://wysinger.homestead.com/nubian105.html
Tags: aida, anta, ashwari, belgium, cheikh, diop, dubai, fanon, hawass, nubian
★
★
★
★
★
Votes: 0
E-mail me when people leave their comments –
Follow