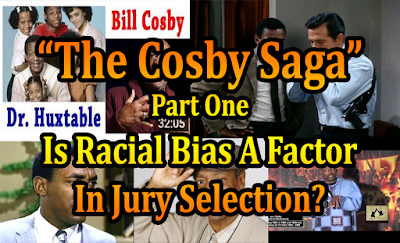 NB Commentary: Personally, I don't think it's about race. I am sure they will be hard pressed to find a jury that either didn't hear about the allegations or never heard of Bill Cosby. I mean next to Oprah and Barack Obama, what other internationally known Black person have we heard of coming out of Hollywood especially during those days. Not to mention his TV series and commercials. If anything, folks will be more lenient even tolerant or maybe even disbelieving in the allegations due to his notoriety.
It's about Hollywood, it's about being a part of the shenanigans that go on in Hollyweird. It's about how they chose certain folks to be "Super Stars" and how they exploit them once they agree to being chosen. It's about the promises that are made to them and what they have to do to still be a part of the game. It's about the parties, the backroom deals, the wine, women and song. And may I add, drugs and other nefarious goings on that happen in Hollyweird. Eddie Murphy said something to the effect, that it's hard to get out of Hollywood clean.
Back in the day, much of the stuff that went on in Hollyweird was hidden from the public, nowadays, there are a plethora of articles, documents and YouTube videos that tell the story of what happens in Hollywood. Bill Cosby was chosen to play a role and as long as he played that role, he was able to do whatever he did. I strongly believe he decided he didn't want to play ball anymore. Not sure what ball they threw his way, but for sure, these folks in Hollyweird make you an offer you can't refuse.. Or you go down and it's just that simple. It ain't about race, it's about the game. If you are gonna be a player, then you gotta play…. Or else. 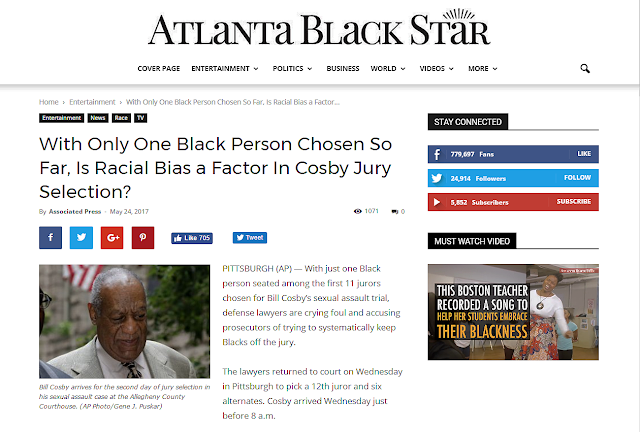 By  Associated Press  May 24, 2017
Bill Cosby arrives for the second day of jury selection in his sexual assault case at the Allegheny County Courthouse. (AP Photo/Gene J. Puskar)
PITTSBURGH (AP) — With just one Black person seated among the first 11 jurors chosen for Bill Cosby’s sexual assault trial, defense lawyers are crying foul and accusing prosecutors of trying to systematically keep Blacks off the jury.
The lawyers returned to court on Wednesday in Pittsburgh to pick a 12th juror and six alternates. Cosby arrived Wednesday just before 8 a.m.
For now, Judge Steven O’Neill has rejected the race bias argument.
Prosecutors said race was not a factor in their decision to strike two Black women from the panel this week. They said one was a former Pittsburgh police detective who sued the city after she was arrested in a public scandal.
O’Neill pledged to revisit the issue if defense lawyer Brian McMonagle, who had accused prosecutors of “a systematic exclusion of African-Americans,” presented statistical evidence to back that up.
The 100 people summoned to the Allegheny County courthouse for juror consideration so far have included 16 people of color. A new jury pool will be summoned on Wednesday.
The jurors selected on Tuesday included a Black woman who said she knew only “basic information” about the case, a young white man who initially expressed a tendency to believe police and two people who said they don’t read or watch the news.
The jury now consists of seven men and four women — all but one of them white — in a case that Cosby has said may have racial undertones.
The actor-comedian once known as America’s Dad for his beloved portrayal of Dr. Cliff Huxtable on “The Cosby Show” is charged with drugging and molesting a Temple University women’s basketball team manager at his home near Philadelphia in 2004. He has called the encounter consensual. Dozens of other women have made similar accusations against Cosby, 79, but O’Neill is allowing only one of them to testify at the June 5 trial in suburban Philadelphia. The jury from Pittsburgh will be sequestered nearly 300 miles from home.
Cosby, in an interview last week, said race could be a motivating factor in the accusations against him.
“Race plays a role in every trial, but it shouldn’t eclipse … the evidence,” Loyola Law School professor Laurie Levenson said. “This case is frankly more about gender, celebrity, how women are treated [and] Bill Cosby’s credibility. But race may take a more focused perspective because the defense has [raised it] recently.”
The trial will take place in Montgomery County, where Cosby had invited Andrea Constand to his home in 2004. Constand said she went seeking career advice. She said Cosby gave her wine and pills that put her in a stupor before molesting her on his couch. Constand was 30 and dating a woman at the time, while Cosby was 66 and long married to wife Camille. Cosby in sworn testimony has said he put his hand down Constand’s pants but said she did not protest.
Cosby has said he does not expect to testify.
The Associated Press does not typically identify people who say they are the victims of sexual assault unless they come forward, as Constand has done.
Cosby was arrested Dec. 30, 2015, just days before the 12-year statute of limitations expired. He has pleaded not guilty and remains free on $1 million bail.
http://atlantablackstar.com/2017/05/24/one-black-person-chosen-far-racial-bias-factor-cosby-jury-selection/?utm_content=buffercf649&utm_medium=social&utm_source=facebook.com&utm_campaign=buffer
LINKS OF INTEREST
Tags: albert, andrea, atlanta, bill, black, boule, camille, constand, cosby, court
★
★
★
★
★
Votes: 0
E-mail me when people leave their comments –
Follow