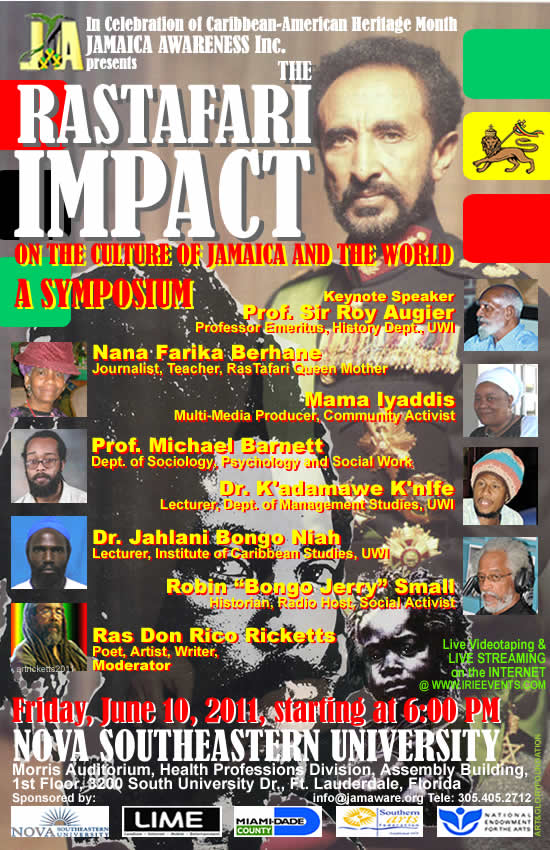 Half-a-century ago, the Rastafari Movement in Jamaica was brought to the attention of a larger part of the still-hostile Jamaican and world community – a citizenry which had developed a fearful attitude largely based on ignorance about the phenomenon and its adherents – by the publication of a report on the movement by three professors from the University of the West Indies.

The view of the “Rastas” that was made possible through the “Report on The Rastafari Movement in Kingston, Jamaica” was a view facilitated by the Jamaican Government of the time, who – in response to a request by “some prominent members of the Rastafari brethren” – asked the UWI to do the necessary research. The three young professors who carried out the interviews with the “Bredrin” and “Sistren” of the movement were Prof. M. G. Smith, Prof. Roy Augier, and Prof. Rex Nettleford.

Today, of the three authors of the 1960 report, only one is still alive – Prof. Roy Augier – and while the Rastafari Movement and its culture have remained alive, and while they have grown dramatically and spread all over the world, the questions around how they actually survived and spread; what the movement “really is”; and what its real impact has been in Jamaica and worldwide, have also remained and, in fact, the questioning has grown along with the movement.

To examine these questions, as part of South Florida’s celebration of Caribbean-American Heritage Month 2011, and a Special Tribute to Prof. Ralston “Rex” Nettleford O.M., Jamaica Awareness, Inc. presents a symposium on “The Impact of Rastafari on the Culture of Jamaica and the World” at Nova Southeastern University, on Friday, June 10, starting at 6:00 PM, in the Morris Auditorium, Health Professions Division, Assembly Building, 1st Floor, 3200 South University Dr., Ft. Lauderdale, Florida.

While the common and easily-accessed colors, symbols and attire, and especially the heavily Rasta-influenced Reggae music, and even what is categorized as a “new religion” – to the consternation of many highly-spiritual Rastafarians – provide ready evidence of the overt impact of this African-rooted cultural phenomenon, there are deeper aspects and their challenges which are beyond those that the general public realizes.

It is some of these deeper, and often more nuanced, resonances that emanate from the hidden core of the Rastafari, as well as many of the more recognized repercussions from this worldwide phenomenon that the panel discussion will examine, following a keynote address from Prof. Roy Augier, surviving author of the 1960 Report.

The discussion will be broadcast live via video stream over the internet at www.irieevents.com