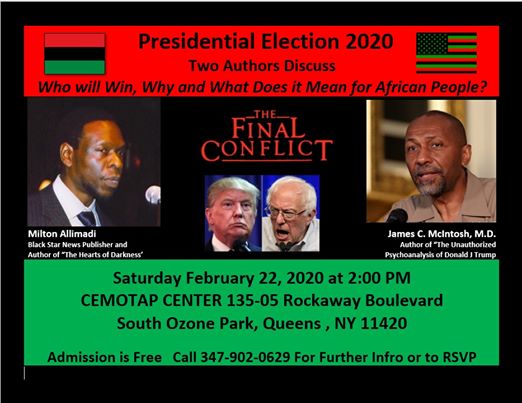 On Saturday February 22, 2020 at 2:00 P.M. Two Black Writers, Milton Allimadi, Publisher of the Black Star News and Author of the "Hearts of Darkness" and Dr. James McIntosh, Psychiatrist and Author of 'The Unauthorized Psychoanalysis of Donald J. Trump will give their predictions for how the complicated Presidential Race of 2020 will play out. They will discuss who will win and what will be the impact of that win on African People. The Program will take Place at CEMOTAP Center located at 135-05 Rockaway Boulevard, South Ozone Park, Queens, NY 11420. Admission is Free. For Further Information Call 347-907-0629

FROM THE UNAUTHORIZED PSYCHOANALYSIS OF DONALD J. TRUMP

Welcome to the Impeachment Circus
By James C. McIntosh, M.D.

What the world has seen of Donald Trump since 2016, has been Trump in the larval stages. He has been testing the walls of his cocoon since his first days of office. He has heeded minimal advice, bowed to few established conventions and tempered his speech hardly at all. That is all about to change. When the Senate acquits Donald Trump, we will see a dictator on steroids. He will heed no advice and respect no convention and tell, at an even faster rate, dramatic lies, constantly for no good reason. For all his brashness heretofore, he has never before been 100 percent sure of the potential consequences of his actions. The closest he has come to ever acknowledging that he was ever wrong, was when in response to criticism, termed his infamous remark about grabbing women’s private parts, “Locker room Talk.” Should he be caught in similar circumstances following the impending Senate, acquittal he will say, “Yeah, I said it so what.”

THERE OUGHT TO BE CLOWNS
The impeachment trial has representation from all three branches of government, Trump from the Executive, John Roberts from the 9 supreme court justices and 100 senators out 540 members of the legislative branch.
When Trump is acquitted, he will act as though it was the result of serve en banc decision of the Supreme Court. In “Trump World,” it will have the weight of a new constitutional amendment passed unanimously by both houses. Trump will emerge from the restrictive cocoon of American law and sanctions and become the true butterfly of a dictator that he has always known that he should be. A big nasty bloated butterfly with the sting of a nuclear ICBM. Let the roundup begin.
He started with the Immigrants, but rounding up the journalists and trade unionists can’t be too far off. Stoke up the coal boys. Stir up the tar. Bring me that Kaepernick Fella and that witch Pelosi.
It was perhaps this unavoidable outcome that Pelosi had predicted last year when she did not feel it was strategic to impeach Trump. We can only guess that what made her change her mind or at least verbalize a change was the absence of any charismatic or strong leader to control the democratic mob seeking immediate though pointless gratification. The 2016 election has left Democrats shell shocked and lacking the confidence that they can succeed with the hard work of winning an election. So, they threw Brer rabbit into the Briar Patch of Impeachment, which was Trumps best chance at reelection. He is kept on the front pages every day. The world hangs on his every Tweet. He will appear invincible after the trial. The supposed low IQ Trump has forever diminished the power of the legislature and the Court with this impeachment as he has diminished the power of the mass media with his Tweets.
DON’T BOTHER THEY’RE HERE
The appointment of his attorneys was in itself like a gigantic dare. It included 2 former defenders of Jeffrey Epstein, Alan Dershowitz, and Ken Star. Star was also the failed independent prosecutor of Bill Clinton regarding the Monica Lewinsky affair. Clearly in choosing this team Trump wanted a circus. And what did the Democrats do? They gave him the center ring. Unless you have a self-defeat wish, you just don’t choose to fight P. T. Barnum at the circus. Choosing the field of battle is a science. What is the terrain? What is the time of day? What are “the ebb and flow of the Atlantic tide, the drift of the continents, the very position of the sun along its ecliptic?” These are just some of the things that have to be taken into consideration for serious big boy warfare. But the Democrats chose a circus. As this article is being written the Senate just voted not to call witnesses. Is anyone still in suspense about the outcome.
If Trump wins November’s election by 1 vote, if the congress has a Republican Majority in both houses, if an amendment is passed within the next 4 years permitting more than 2 terms of Presidency, the decision to Impeach Trump in a Republican Controlled Senate during an election year will be recorded by future historians as the biggest political blunder in the history of the empire, former republic. Optimists hope for the best; the realistic should prepare for the worst.