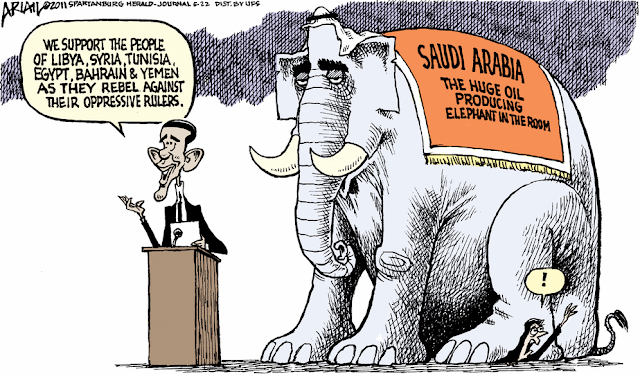 NB Commentary:  I have read several comments under the articles listed below and it amazes me how these folks are not seeing the humongous elephant in the room.

Can the American populace be that blind, deaf and dumb? Did they just crawl out from under a rock when they heard about Omar Mateen's 911 call saying he was an ISIS sympathizer? Did they not want it to be heard that he said he wanted America to stop bombing  his country of Afghanistan? Why was it redacted from the original release of the 911 calls and then released? Why has the story changed to him being a disgruntled closeted gay homophobe who saw two guys kissing and to detract from his own desire told his dad how disgusting it was? And where is his wife? 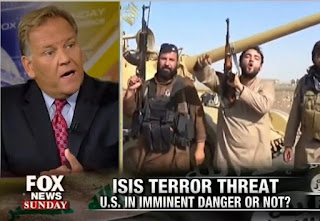 Have the American people been so shook up and down that their brains are rattling and they cannot connect the dots even if they tried? How do they not get
it? Haven't they heard that the ISIS attacks will come home to roost? Weren't they warned that these so-called rebels turned terrorists will be crashing at a party near you? Weren't they fear mongering and at the same time arming these so-call rebels on one hand and saying you better watch out on the other hand?
READ MORE.....
I find it amazing that they have no trouble whatsoever, blaming everything on ISIS when it happens in another country, but when it happens here, mums the word. Why is that?? And why can't folks see it.

"Muslims most often are used as convenient US or other Western state-sponsored false flag attack patsies.
Yet as James Petras explains, “(o)ver the past fifty plus years, over 125 mass shootings/massacres have occurred within the United States but not one perpetrator has been identified as a trained member of an international Islamist terrorist organization.”

Why won't they just come out and call a spade a spade? Either it's ISIS or it ain't, either they are a part of the terrorist network or they ain't. And if they are.. Then a lot of questions should ensue.
Shouldn't they be bombing the US cells wherever they find them?
Shouldn't they be sending drones to US wedding parties wherever they suspect a terrorist cell?
Shouldn't they be rounding up these terrorists and sending them to Guantanamo?
Shouldn't they be bombing their schools,  hospitals and neighborhoods where they are held up in the US?
But instead we see them...
Shaking hands with them....
Arming them....
Looking the other way when they travel across borders and enter European countries.....
Investigating them and then releasing them.....
Allowing so called radicals, radicalize folks via the internet (Robertson in Mateen's case).....
Allowing their Mosques that openly teach propaganda against the US to exist, instead of shutting them down and weeding them out.....
No, it is much more fun to do that to other countries and their defenseless men, women and children.
It's more fun to blame Obama and say he is closet Muslim who won't expose the hateful Muslims for who they are. 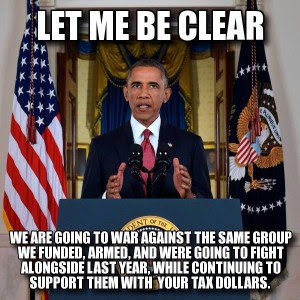 It's easier to omit the "War On Terror" that was launched before Obama came into
office.
It is easier to ignore the death and destruction that the US and NATO has rained down on the defenseless as a result of this so-called and literally impossible war to win.
It's easier to create chaos, division, corruption and massacres and blame it on those folks over there.
It's even more fun to show the blood and gore and blood and more gore spewing out of those folks over there than to face it here in the USA.
So when Bush made the threat that he was going to seek them out wherever they are, he did not mean he would do much of that here in the US. In fact, he just kinda sorta didn't mean the war on terror was gonna take place in the US at all. No war on terror on US soil, only in the middle East, cause for sure, they ain't having that war in Paris, France, Brussels. 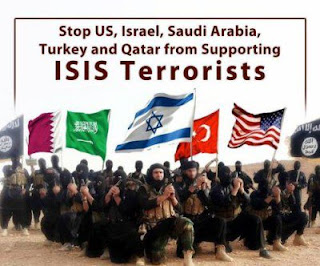 Then we have the openly complicit and criminal relationship with Erdogan and the Saudi's who are also arming the so-called rebels. Not to mention, that Israel says the rebels are better than Assad. And the US supports Israel. So what's wrong with that picture?
The false flag narrative has simply run its course. People are waking up and even if it's just 10 out of every thousand that is still too many. What else is there to do besides go to full scale war with Russia, which is a fools dream. Go to war with Russia?? You're kidding me right?
SO WHY DOES THE FBI WANT THE ORLANDO AGENCIES TO DENY PUBLIC RECORD REQUESTS?
Because the US is responsible for the deaths that happened in Orlando and probably every where else that has the ISIS tag on it, because the US congress agreed to ARM THE REBELS! And in doing so, they endangered the lives of everyone everywhere, and not just over there. Them chickens will find their way, right back home!! 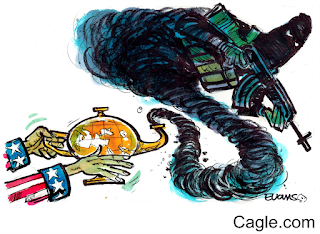 My rants are just that, rants, but I back them up with the facts and news articles and/or videos that I find on the internet, which seems to be the bane of the existence of the The Powers That Shouldn't Be.

Steven Lendman's article brings it all into perspective, and I have quoted it below. He is a prolific writer and his use of critical analysis of the shenanigans that these folks in power get themselves into is par excellance.

Genesis of Current Mass Shootings, Blasts and Suicide Bombings
by Stephen Lendman  July 4, 2016
They’re coming in rapid fashion - in late June/early July alone:
Whether these and similar attacks are terrorism, false flags, lone wolf incidents or something else requires understanding how they began in the first place.
In his memoirs, titled “From the Shadows,” former CIA director/defense secretary Robert Gates said US intelligence operatives began aiding Mujahadeen fighters in Afghanistan six months before Soviet Russia invaded.
Former Carter administration national security advisor Zbigniew Brzezinski explained, saying Jimmy Carter, on Independence Day eve (July 3, 1979), “signed the the first directive for secret aid to the opponents of the pro-Soviet regime in Kabul.”
“And that very day, I wrote a note to the president in which I explained to him that in my opinion this aid was going to induce a Soviet military intervention.”
Mujahadeen support led to today’s Taliban, Al Qaeda, the Libya Islamic Fighting Group (LIFG), ISIS, Jabhat al Nusra, Jaysh al-Islam, Ahrar ash-Sham, Boko Haram, and other jihadist groups - US created and sponsored or offshoots from them.
Bipartisan US imperial policy bears full responsibility for unleashing a scourge of state-sponsored terrorism in the Middle East, Central Asia, Africa, Europe and America.
Brzezinski was unapologetic, asking “(w)hat is more important to the history of the world? The Taliban or the collapse of the Soviet empire? Some stirred-up Muslims or the liberation of Central Europe and the end of the cold war?”
He failed to explain America needs enemies to advance his imperium. Communism was its bogeyman earlier, public enemy number one until Soviet Russia’s 1991 dissolution.
Now it’s radical Muslims, Islam vilified in the process - directly or by implication, America raping and destroying one Islamic country after another.
Muslims most often are used as convenient US or other Western state-sponsored false flag attack patsies.
Yet as James Petras explains, “(o)ver the past fifty plus years, over 125 mass shootings/massacres have occurred within the United States but not one perpetrator has been identified as a trained member of an international Islamist terrorist organization.”
In contrast, America “brutalized and, directly or indirectly, massacred millions of Muslim civilians, citizens of once-sovereign nations, throughout the Middle East, South Asia, and North Africa,” - unprecedented lawlessness continuing unabated, millions more lives at risk.
State-sponsored terror threatens world peace, America its lead perpetrator, waging war on humanity at home and abroad. Its rage for dominance created societies unfit to live in, imperiling life on earth.
Imperial madness threatens everyone, endless wars and headline-making violent incidents reminders of what’s at stake.
Stephen Lendman lives in Chicago. He can be reached at lendmanstephen@sbcglobal.net.
His new book as editor and contributor is titled "Flashpoint in Ukraine: US Drive for Hegemony Risks WW III."  http://www.claritypress.com/LendmanIII.html
Visit his blog site at sjlendman.blogspot.com.
http://sjlendman.blogspot.com/2016/07/genesis-of-current-mass-shootings.html 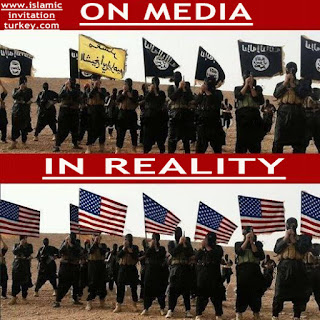 G4S calls itself the “world’s leading security solutions group.” The London-based company contracts often with the U.S. government — it currently operates 32 taxpayer-funded juvenile prisons in the U.S. through G4S Youth Services, and has transported and housed immigrant detainees on behalf of the Department of Homeland Security. G4S has also coordinated security for more than 90 percent of nuclear sites in the U.S, as well as airports, hospitals, and seaports. http://fusion.net/story/313690/orlando-shooter-g4s-security-contractor/
Orlando terrorist connected to radical Muslim cleric who was released from prison last year after he converted 36 people in jail and 'runs a website used to dispense his teachings'
http://www.dailymail.co.uk/news/article-3639079/Orlando-terrorist-connected-radical-Muslim-cleric-released-prison-year-converted-36-people-jail-runs-website-used-dispense-teachings.html#ixzz4DSJ8Agbx
Robertson, who was a former US Marine and undercover FBI agent before turning into a radical Imam, was released from prison last year despite warning from officials and prosecutors that he would recruit people to carry out horrendous acts of violence.
http://www.dailymail.co.uk/news/article-3639079/Orlando-terrorist-connected-radical-Muslim-cleric-released-prison-year-converted-36-people-jail-runs-website-used-dispense-teachings.html#ixzz4DSJYL6e5
Investigative Report Proves Turkey Part of ISIS Terror
https://theinternationalreporter.org/2015/11/24/investigative-report-proves-turkey-part-of-isis-terror/
“We must not question the motives of our elected leaders, who despite sitting on this information for years, still lie to us, flagrantly, even now, before the blood of 129 French citizens has even dried, pretending that they intend to ‘destroy’ a band of psychopathic murdering scum, armed and funded from within the heart of NATO,” Ahmed concludes.
Hundreds of Americans Have Fought for ISIS
Says House Intel Chair: “Some of them have drifted back to the U.S.”
http://legalinsurrection.com/2014/09/hundreds-of-americans-have-fought-for-isis/
US, ALLIES CREATED ISIL TO MAKE ‘PERPETUAL WAR’ IN MIDEAST: ANALYST
“This is a big part of the reason why ISIS exists, it’s about perpetual war; the military industrial complex has to have new markets, has to make money, so they have to keep things in the Middle East unstable,” Henderson told Press TV on Saturday.  http://smoloko.com/?p=6294
Why Barack Obama and most of the U.S. Congress are Guilty of Treason
http://davidduke.com/treason-barack-hussein-obama-u-s-congress-face-charges-treason/
Secret Pentagon Report Reveals US “Created” ISIS As A “Tool” To Overthrow Syria’s President Assad
http://truthalerts.com/secret-pentagon-report-reveals-us-created-isis-as-a-tool-to-overthrow-syrias-president-assad/
The T-Shirts
ISIS, apparently, sells merch. Not just T-shirts and baseball caps, but — gasp — toys for children! Here’s a CNN video from June 24. (I say “seems” because I came in late on this story and Google is a horrible research tool, so, readers, feel free to correct any of my misapprehensions.) Here’s the video:
http://www.nakedcapitalism.com/2014/07/isis-iraq-t-shirts-cats-app-hasbara.html
America Created Al-Qaeda and the ISIS Terror Group
http://www.globalresearch.ca/america-created-al-qaeda-and-the-isis-terror-group/5402881