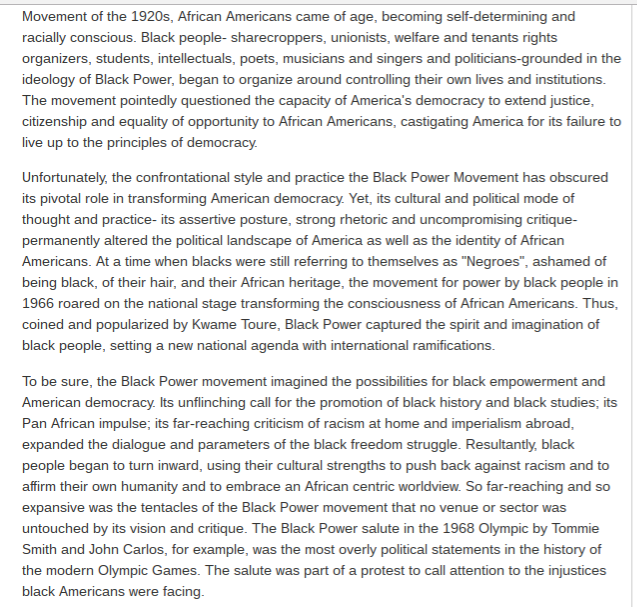 By Jitahadi Imara | Though misunderstood and misrepresented by the media and its opponents, the 1960s Black Power movement touched every aspect of American culture, and like the "New Negro" Movement of the 1920s, African Americans came of age, becoming self-determining and racially conscious. Black people- sharecroppers, unionists, welfare and tenants rights organizers, students, intellectuals, poets, musicians and singers and politicians-grounded in the ideology of Black Power, began to organize around controlling their own lives and institutions. The movement pointedly questioned the capacity of America's democracy to extend justice, citizenship and equality of opportunity to African Americans, castigating America for its failure to live up to the principles of democracy.

Unfortunately, the confrontational style and practice the Black Power Movement has obscured its pivotal role in transforming American democracy. Yet, its cultural and political mode of thought and practice- its assertive posture, strong rhetoric and uncompromising critique-permanently altered the political landscape of America as well as the identity of African Americans. At a time when blacks were still referring to themselves as "Negroes", ashamed of being black, of their hair, and their African heritage, the movement for power by black people in 1966 roared on the national stage transforming the consciousness of African Americans. Thus, coined and popularized by Kwame Toure, Black Power captured the spirit and imagination of black people, setting a new national agenda with international ramifications.

To be sure, the Black Power movement imagined the possibilities for black empowerment and American democracy. Its unflinching call for the promotion of black history and black studies; its Pan African impulse; its far-reaching criticism of racism at home and imperialism abroad, expanded the dialogue and parameters of the black freedom struggle. Resultantly, black people began to turn inward, using their cultural strengths to push back against racism and to affirm their own humanity and to embrace an African centric worldview. So far-reaching and so expansive was the tentacles of the Black Power movement that no venue or sector was untouched by its vision and critique. The Black Power salute in the 1968 Olympic by Tommie Smith and John Carlos, for example, was the most overly political statements in the history of the modern Olympic Games. The salute was part of a protest to call attention to the injustices black Americans were facing.

Another sector heavily impacted by ideology and direction of Black Power Movement, was the music industry. The music in the late 1960s began to reflect the influence of the movement- James Brown, Say it Loud, I'm Black and I'm Proud, the anthem for the Black Power Movement, Nina Simone, To Be Young Gifted and Black, The Temptations, Message From A Black Man. Besides this, the "Natural", a hair style which evolved into a cultural and political statement for black men and women, and the dashiki, which became the dominant form of dress for African Americans, were representative of the African centric perspective of blacks.

Politically, at both the local and national level, black people started to organize around the three ends of Black Power-self-respect, self-determination, and self-defense. In 1967 the first Black Power Conference was held in Newark. A Black Power Manifesto came out of this conference, condemning "neo-colonialist control" of black populations worldwide and calling for the circulation of a "philosophy of blackness" that would unite and direct the oppressed in common cause. In 1972 Black Power advocates, organized and called for a State of the Union meeting, first National Black Political Convention. Delegates included elected officials and revolutionaries, integrationists and black nationalists, Baptists and Muslims (the widows of Martin Luther King, Jr. and Malcolm X- Coretta Scott King and Betty Shabazz- both attended). Participants were buoyed by the spirit of possibility, and themes of unity and self-determination.

In a real sense, Black Power ushered in a new black politics. In Dark Days Bright Nights, Peniel Joseph, argues persuasively that the politics of Black Power included a "cultural ethos that redefined black identity by promoting defiantly popular images of racial pride and self-determination." Peniel adds that Black Power "waged a war of attrition to in order to implement Black Studies programs...established independent schools, educations centers, cultural centers, and think tanks...the new black politics featured alliances between elected officials and black nationalist militants, and a cultural movement that used art to expand black consciousness and helped forged an international legacy that viewed African liberation as the crown jewel of a global revolution." Peniel concludes that all of this in turn "planted seeds that partially inspired post-Black Power era anti-apartheid activisms," and that; "If the civil rights worked from the outside-in by paving the way for legal and legislative reforms, Black Power worked in reverse, imbuing the race consciousness and pride within the African American communities upon which much of contemporary black identity is based."

In brief, unlike the Civil Rights Movement, which has had its signal events incorporated into the fabric of America's political and cultural institutions and historical memory through the media and academic historians, the Black Power Movement has been defined by its excesses and demonized by the media and marginalized in history of the 1960s. Yet, failure to recognize the achievements of the Black Power Movement and rescue its legacy serves only to diminish the history of the social justice movement, including civil rights, and the contemporary racial justice movement. To be sure, this Movement made significant accomplishments in transforming African American politic and culture, and in reforming American institutions: laying the groundwork for the Jesse Jackson's candidacy for the Democratic 1984 and 1988 presidential nominations, the election of Ron Brown as the first African American chair of the Democratic National Committee, and the election of Barack Obama, the first African American elected President of the United States of America.

More information can be obtained on Kwanzaa by going to http://www.kwanzaaguide.com