Facts are important in life. They are especially valuable in the field of journalism. Tonight the PABJ held their monthly meeting and was trained in the fine art of the use of United States Department of Commerce , U. S. Census Bureau data interpretation systems and tools.

The group held it's monthly meeting at the Philadelphia Inquire / Daily News bldg. 400 N. Broad streets and had a presentation by the Partnership Specialist of the Philadelphia region. Ms. Jenaye M. Flamer share the tools and the collection systems of the department. Ms. Flamer covers the region that encompasses the states of New York all the way to DC. 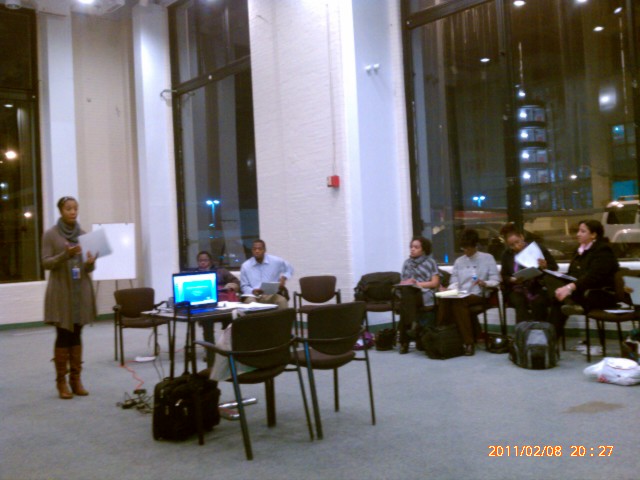 Jenaye provided the group with the latest information on the Census data releases and an overview of the 2010 Census data products. This information will be of great use to journalist and media professionals, both of whom may use this information in their reporting media workflow. "The PABJ membership is nearing a all time high", stated Melanie Burney, during her membership, budget and fundraising report. if you check the website you would be surprised as to whom is a member both locally and nationally.

Chris Murray gave a passionate report about plans to continue meeting with the regions Philadelphia Media network managers. "the lack of diversity continues to be evident in the press boxes locally." Also the lack of diversity representation in the administration and management circles of the major media outlets is glaring. I personally have been involved in the efforts of breaking the glass ceiling of the media world. Being a person of color, and getting press clearance and access is a daunting task, even if you are certified with media and press credentials. My work is used but being hired as staff is a merry go round, long hours, to compete seems to mean little to the decision makers in the Philadelphia region. I have found having college credentials and decades of experience does not guarantee access, amazing. I and others have had to resort to social media to get our work published. Being deaf and disabled does not help matters any in my case, but , I will continue as I feel the next generation will benefit from my struggles for equality.

While the big bucks go to others is very disheartening to broadcast media students across our region.

I have watched many people attempt to make a living in the field and give up and change careers as the jobs offered are to few and far in between. Philadelphia is fortunate to have a experienced group like the PABJ to continue to give hope and advocate for the future media personal that are still in high schools. I wonder if and when will it change. The small radio stations are being shut out of the airways as the large corporations gobble them up. The struggle continues...

The group is fresh off a Social media event, that had two panels that outlined the procedures and resources that journalists and media professionals needed to maintain the excellence that the field requires. The group has a number events scheduled for the 2011 calendar.

You are invited to a networking mixer below:

The Philadelphia Association of Black Journalists (PABJ) is a not-for-profit organization founded in 1973 by journalists concerned about the lack of black journalists in the media and the dearth of coverage of the black community.