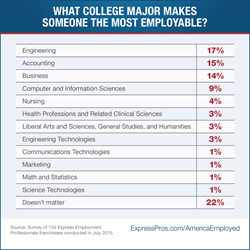 The findings come from a survey of 134 Express franchisees across the nation. Respondents were asked, “Which college major makes someone the most employable?”

Engineering was the most popular response at 17 percent, followed by accounting (15 percent), business (14 percent) and computer and information services (nine percent). No respondent chose education or finance. In a similar 2014 Express survey, business topped the list, followed by engineering.

Not all respondents felt strongly about a single college major, though. The most popular response, at 22 percent, was “doesn’t matter,” indicating that they may place greater value on “soft skills” like work ethic, attitude, and accountability than on degrees or certifications alone.

“We’ve often said there’s a mismatch between the skills people have and the the skills that employers are looking for, and this survey indicates which college degrees confer the skills that are most in demand,” said Bob Funk, CEO of Express, and a former chairman of the Federal Reserve Bank of Kansas City.

“While we always need a workforce with diverse educational backgrounds, college students would be wise to consider which degrees will offer them the greatest chance of employment after graduation. Guidance counselors, parents, and educators would also be well advised to pay attention to the demands of the modern job market.”

The survey of 134 Express Employment Professionals franchisees was conducted in July 2015.

If you would like to arrange for an interview with Bob Funk to discuss this topic, please contact Sherry Kast at (405) 717-5966.

About Robert A. Funk
Robert A. “Bob” Funk is chairman and chief executive officer of Express Employment Professionals. Headquartered in Oklahoma City, the international staffing company has more than 750 franchises in the U.S., Canada and South Africa. Under his leadership, Express has put more than five million people to work worldwide. Funk served as the Chairman of the Federal Reserve Bank of Kansas City and was also the Chairman of the Conference of Chairmen of the Federal Reserve.