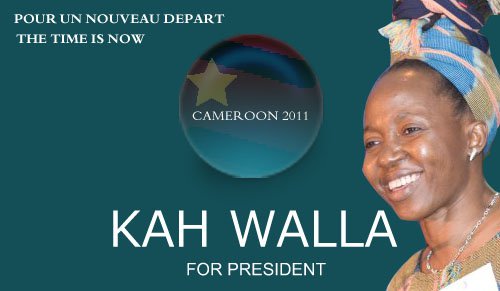 On April 30, 2011, the Cameroon People's Party (CPP) held an extraordinary congress. Following this conference, three main resolutions were voted upon.

1. Election of Ms. Edith Kahbang Walla known under the short form of her name, Kah Walla, as President of the National Council of the CCP

2. Nomination of Ms. Kah Walla as candidate of the CPP for the presidential election of October 2011

3. Renewal of the secretariat of the party to include a young, competent and enthusiastic team.

4. The programming of a national tour by the president and candidate of the CPP in order to prepare the party structures for the October 2011 election

I. BACKGROUND OF THE EXTRAORDINARYCONGRESS HED BY THE CPP

From consultations held with these parties, two key results emerged. The first is its entry into the Cameroon People's Party where she was elected President of the National Council and invested as party candidate for the 2011 presidential election, during the extraordinary congress of April 30, 2011. The second is the establishment of a political platform "THE TIME IS NOW CAMPAIGN" which is a political accord with several other political parties around her candidacy for the presidential and synergy of action at the municipal and legislative deadlines 2012.

In this regard, the extraordinary congress of April 30, 2011 of the Cameroon People's Party marks the birth of a new stage in the conquest of democracy in Cameroon. It must be said that this is one of the few times we have seen "a peaceful phasing out» of a party president and founder and of those with whom the party was created in 1991 for a new political generation. Thus, the Rev. Prof. TITA Samuel Fon, President and Founder of the CPP became the Honorary Chairman while Ms. Kah Walla takes the reins of the party as Chairperson of the National Council. At the same time as the management of the party has been handed over to a National Secretariat, whose average age is 30 years.  A real breakthrough in our context.

The key resolutions of the extraordinary congress are found in the minutes of the meeting attached.

The Cameroon People's Party was born at the time of the return to multiparty politics in the early 1990s in Cameroon by Decision No. 0372/D/MINAT 26 December 1991. It is in fact the determination of some of the Cameroonian patriots of the time to contribute to building a democratic and prosperous Cameroon.

The founders of the CCP were Mr.TITA Samuel Fon, FONKI ASAH Jefferson David, BABA Mathias MCHIAJI, NYA Maurice and others. They shared the strong will to seize the opportunity of the return to multiparty politics to launch a party that would defend the ideas of social democracy and patriotism on the national political scene. This noble ambition led to the establishment of the party and its regular participation in local elections (legislative and municipal).

Today, the CPP today has taken a new turn. It is about to write a new chapter in its history and in the history of Cameroon with the entry into its ranks of Ms. Kah Walla. Indeed, her candidacy in the next elections is a tremendous opportunity for expansion which will be given to the CPP as it will certainly enable spread the values and principles of the party throughout the country.

As of April 30, 2011, Kah Walla is the National President of the Cameroon People's Party.

B. IDEOLOGY OF THE CAMEROON PEOPLE'S PARTY

The Cameroon People's Party is a political organization of social democratic orientation. The social-democratic ideology was born of the struggle waged by workers around the world against oppression and all forms of exploitation. It is an ideology of freedom and human dignity.

The CPP includes those who want to change the social organization of the Cameroonian society in order to reduce inequalities of all kinds and redistribute power so that it is permanently held by the majority.

The CPP stands for the democratic regime. The party firmly believes in democracy that allows the people to choose the women, men and social projects that will lead the country.

The CPP stands for a state that promotes social justice, civil liberties and human rights of the individual.

The CPP stands for a state that recognizes the diversity of its citizens and which organizes and preserves solidarity among these citizens.

The CPP stands for governance systems that ensure that policies and government decisions are based on expectations and real needs of the people.

The CPP stands for a society where leaders are accountable to the governed for their actions. It will ensure that Cameroon will again become a society where the words honor and responsibility have real meaning for all.

The CPP stands for a Cameroonian society that ensures justice and does not tolerate impunity.

The CPP believes that the role of the State is to ensure the well being of all citizens of Cameroon.

The CPP stands for a Cameroon for and with Cameroons.

The CPP stands for a Cameroon which plays a leading role in the concert of nations, defender of the values of peace and proponent of a united Africa, strong and prosperous.

The CPP stands for a world order dedicated to peace, respect for the sovereignty of states, dialogue between cultures and civilizations, fairness, justice, solidarity and the peaceful settlement of disputes as basic constituents for international relations.

All the political philosophies of the CPP are summed up by its slogan: "The People First".

The CPP is committed to defending the following principles and values in all its actions in national politics:

Principle 1: The people hold sovereign power.
Principle 2: The rule of law and democracy constitute the necessary framework and the precondition for all other rights and freedoms.

Principle 3: Social justice and equality for all in society are at the heart of our struggle.

Principle 4: The people of Cameroon have the solutions to their problems.

Principle 5: The balance of power in society is the guarantor of democracy and individual and collective freedom

Re-branding the image of Africa