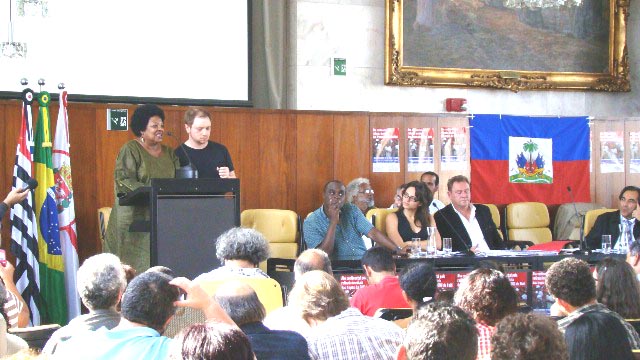 Colia Clark in Brazil
DECLARATION OF U.S. DELEGATION TO CONTINENTAL RALLY TO DEFEND HAITI AND DEFEND OURSELVES
(Sao Paulo, Brazil -- November 5, 2012)
We salute the initiative of the Continental Rally to Defend Haiti and Defend Ourselves. Indeed, the fight against the illegal military occupation of Haiti is in the interests of all the world's people.
The United States delegation to this historic event includes Colia Clark of the International Commission of Inquiry on Haiti, Kim Ives of the Haitian weekly newspaper Haïti Liberté, and journalist Dan Coughlin of The Nation.
We urge the immediate closure of the 25 foreign military bases in Haiti and the withdrawal of all international forces. By any measure, the eight-year Brazilian-led occupation has been an unmitigated disaster for human rights and democratic rule in Haiti.
Under the occupation, thousands of Haitians, most of them poor who were seen as
supporters of the Lavalas political movement and former President Jean Bertrand Aristide, were killed or jailed.
Under the occupation, staged elections have excluded the vast majority of Haitians and themost important political party from the democratic process. This has led to the neo-Duvalierist regime of President Michel Martelly taking power with the promise that he will resurrect Haiti's despised army -- a force that was used only to kill and repress Haitians, to deny them their democratic rights.
Under the occupation, the polluting practices of UN troops led to the introduction of a raging cholera epidemic that has now killed more than 6,600 Haitians and infected half a million.
Under the occupation, UN troops have been used as a partisan political force, primarily to suppress the legitimate demonstrations of Haitians against the 2004 coup and UN occupation.
UN troops have also tried to stop Haitians -- already the lowest paid workers in the hemisphere -- from demonstrating for a living minimum wage.
This disastrous and anti-democratic occupation has stained the reputation of all the countries that are involved. But it is Washington that is leading this effort. As U.S. State Department cables revealed by Wikileaks shows, the UN mission in Haiti fulfills a "core" U.S. foreign policy objective at half the cost to Washington and at a time when U.S. troops have been tied up in Afghanistan and Iraq.

Neither the UN, nor the armies and police forces of more than 45 countries from around the world, should be used as Washington's weapon to create a low-wage sweatshop country with no democratic or human rights.
As many Haitian leaders have said, there must be Haitian solutions for Haitian problems. If the UN wants to send doctors, engineers or other specialists to assist Haitians, as the Cubans and Venezuelans do, we have no problem with that. But the UN should never have sent soldiers, tanks and guns to Haiti, weapons which have only been used to enforce the neoliberal agenda of Washington, Paris, and Ottawa. It is past time for the UN swords to be turned into ploughshares.