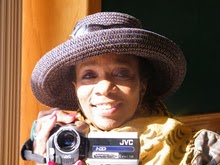 The Saturday before Memorial Day, is the kick off for Dance Africa, when Baba Chuck Davis, founder of the African American Dance Ensemble, and his troupe land in Brooklyn to regale us with his latest gathering of talent from Africa and her Diaspora. And this week end was absolutely spectacular.

Davis who stands tall at 6’5” presided over the event from the sidelines, while locally based community groups presented their youth, attired in African regalia, dancing their hearts out to youthful and seasoned drummers, reminiscent of what it may have been like in traditional African villages. Local dance troupes were in great form. A young toddler with the spirit of a modern day baby-faced Sammy Davis Jr., played African drums in the manner of a seasoned drummer, to the pleasure and amazement of the adults in the audience. (I told you our children are born geniuses, when their talents and skills are nurtured, people call them prodigies.)

The Elders wore full traditional clothing - lapas, geles, bubas, grand bubas, and agbadas; wearing lekes of their traditional Orisha (or Gods); priests/priestesses were attired in all white, came into the tent in a stately procession and sat in seats set aside for them on the right side of the tented area.

Their clothing was somewhat rivaled by the audience, many of whom wore traditional African dress in respect for the event.

They were addressed by Assemblywoman Annette M. Robinson, who was there to both celebrate Dance Africa’s kick off, and Delta Sigma Theta’s annual event, which also takes place at Bed Stuy Restoration the Saturday prior to Memorial Day. The joint events showcase local talent and pays homage to the accomplishments of locally based community organizations.

Dance Troupes formed around the community performed both on the stage and on the ground - we were in Africa all afternoon - or was it that Africa was in us?

But it was the folkloric group from Cuba, Folklorico Cutumba, whose Priest had blessed the opening of the event, that really had the audience going. Anyone who had didn’t get the linkage between Cuba and Africa, certainly got it yesterday. From the chants to the Orishas, through the dances, through the music - all ours, all theirs, all Africa’s - and we were all one.

For those of you who are not totally culturally aware, let me explain - Cuba, Puerto Rico, and other islands (South America - esp. Brazil; the Caribbean - esp. Haiti) where those ships dropped us a few centuries ago, has some of the richest practices of Yoruba (primarily Benin and Nigeria) religion in tact, despite the efforts of the slave monsters and the Catholic church to wipe it. When necessary, they changed the names of their Orisha (Gods/Goddesses) to catholic priest names, and kept right on honoring them - and do so to this day. Santa Barbara is an alias for Shango (or Chango - my Orisha)

In order to preserve their authentic ancestral and traditional beliefs, the Lukumi people disguised their orishas as Catholic saints. When the Roman Catholic slave owners observed Africans celebrating a Saint's Day, they were so dumb they thought the slaves were actually worshiping their sacred catholic saints. The term Santería means "the Way of the Saints", but was was originally a perjorative used Spanish to mock the slaves.

Slavery in the US, however, was the most brutal, degrading and punitive of all the practices - anyone caught speaking in their native tongue, playing drums, or any form or remnant of our African culture was severely punished - castration, lynching, and other heinous practices, all but wiped out any remnants we had of our cultural ties to Africa. Notice I said “all but” wiped out -- we may not have maintained the forms, but the substance of who we are still remains, and has been growing ever more strongly daily. There are strong Yoruba centers in the US and parts of England. And while there is no move to leave the Christian faith, there has been more and more of a blending and understanding of the efficacies of many traditions that we were severed from over 400 years.

Perhaps this is why Dance Africa, which started at BAM 34 years ago, remains strong and popular in New York, with thousands coming from all over the US to participate one of the biggest, grandest African American celebrations of Africa. The dancers and performers are brought from all over Africa and the diaspora to perform at the Brooklyn Academy of Music (BAM) for four days during Memorial Day Weekend, while on the streets surrounding the Music center a robust street festival with vendors, food products, performers, are likewise entertaining New Yorkers.

This also coincides with Fleet Week, when the Navy comes to New York, so there are a significant number of African Americans from the Navy who have traveled throughout the world, but have never experienced the likes of this event.

So if you think Memorial Day Weekend was a week end to go away, guess again. If you live in New York, you could find no better place to get away to than little old Brooklyn New York. Did I say “little“? There is definitely nothing “little” about Brooklyn. Brooklyn is actually the 4th largest city in the US. So, I strongly suggest you bring or wear comfortable (cute, but comfortable for the sisters) walking shoes; a shopping cart or big shoulder bag - because you will not be able to resist the bargains and the beautiful clothes and African art and crafts for sale; and be prepared to dance on the spot.

By the way, it appears that many of our very own African brothers and sisters, residing right here in Little Old New York City, are totally unaware of Dance Africa or the street festival. So do them a favor, and bring them to Brooklyn, so they can see the influence traditional Africa still has on people of African Heritage. We celebrate the home of our ancestors here big time. Sometimes we are living right next to each other, working side by side, yet they are totally unaware of these wonderful events. So take an African brother or sister by the hand and bring them to Brooklyn. Give them a Dance Afrika Brochure. We have to draw the circle around us so that it brings us together, not leaves us out.

That said, for my brothers and sisters from other parts of Africa, i.e, Kenya, Tanzania, Ghana, the Congo, South Africa, Namibia, The Gambia, etc; for my brothers and sisters from the Caribbean (actually little pockets of African-ness); South America or just the plain old USA South - south New York, South Carolina; Alabama, etc. - this is for all of us with one tenth of one per cent of Black Blood flowing through our veins - so don't get it twisted. It's for all of us. Come out and play

Africa is alive and well and living in New York City.