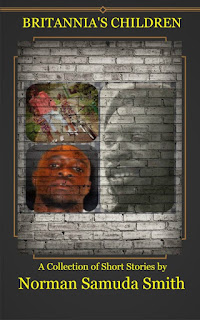 ‘If you haven’t purchased and read BRITANNIA’S CHILDREN by Norman Samuda Smith, here are my reasons why you should…’

An anthology of short stories which together not only represents a time capsule of black British youth experiences between the 1960s and possibly the late 1970s, Britannia’s Children by Norman Samuda Smith (2013), is also an organic record of the author’s Journeys. I read this book several times; first for leisure. Secondly, I read to establish a chronology other than that given by the year each story was written, for I felt so familiar with the setting and characters of each story I was forced to ask the questions Who and When? Lastly, I read to harvest the information between the lines. The hidden having dissected and critically analyzed Smith’s stories I found Britannia’s Children to be original, honest, inspirational and humbling.

As a book for leisure the mention of the familiar (for example Birmingham City Center, Grange Road Park and the Small Heath Community Center) evoked the feeling of nostalgia. At the most basic level it did for me and will do for the Birmingham populace; particularly if one traverses the Small Heath area, what the books of famous crime novelist Patricia Cornwell did for residents of the city of Richmond, Virginia (United States). Cornwell, having an intricate knowledge of Richmond used the City’s various locales as a backdrop to her stories. Just knowing that one shared the same knowledge as the writer not only spurred local interest, it boosted sales and often triggered heated discussion as to her accuracy. Every story triggered ten stories for me thus setting me on an emotional roller coaster.

Reading between the lines I found the first four stories 1981 through 1985 to be very revealing. Careful scrutiny of these stories; all of which have been presented in chronological order, gives a rough insight to Smith searching to find his dialect, his medium of expression and his true voice. As I read the stories I made note of the writer’s use of Caribbean colloquialism, British slang and of course standard English. As Smith grew more confident and comfortable Caribbean colloquialisms were less forced and he interjected some British working class slang. By Rasta Love it was a Standard English texture in varying degrees by colloquialisms and slang determined by situation. The book is truly an excellent example of hybridization.

Having written the above I must say I was not only pleasantly surprised by its contents, it was difficult keeping my comments objective. A contemporary of Smith’s from infant through to Secondary school up until 1973, Britannia’s Children appealed to me at multiple levels. Every story triggering ten stories thus causing my emotions to undulate as if riding on a roller coaster. There were very few stories in which I did not seem to be directly or indirectly involved but I can testify to the authenticity.

In the story “Who Can’t Hear Must Feel!” (Verse 1), the names Wendell and Leroy used in this tale are undoubtedly pseudonyms; I actually know who these two particular boys are. However, even if I did not, we all have knowledge of the family structure that they represent. I was one of those kids harmlessly begrudged for being able to play in the Park every day. The Grange Road Park was my backyard. Less known were the circumstances which made our freedom possible. Along with four other families, my family lived in a row house on Charles Road. With multiple sets of children in a rooming house and a backyard that was essentially a dump there was little room for play. Fortunately, the windows of the second floor kitchen used by my mother and the attic in which we lived both gave my parents panoramic views of the Grange Road Park. Being able to watch my every move I was given the false sense of freedom. This was true for several of my peers that played in the park daily, we were what are referred to in Caribbean culture as ‘one room pick ninny’. I find it humorous that while I begrudged Wendell and Leroy for their small private backyard, they begrudged me for my compulsory freedom. My parents would say, “Buoy!! The grass is not greener over the fence, just depends on how the sun shine pon it”. I guess they were right.

While I am familiar with the Streets named, I know nothing of Small Heath sound systems and dance hall life as portrayed in Rasta Love. I was plucked out of Birmingham before completing secondary school. My party experience in Birmingham is restricted to the summer of 1988. Similarly, my experience with the Small Health Community Center is limited to two evenings of indoor football. The stories in which they are mentioned however are very powerful triggers. I could see the houses on Muntz Street from our attic. Once being a truant from school I watched two houses on fire being put out by the firemen. Then related the events to my father, was my undoing. He realized I could not possibly have been at school and witnessed the fire. I will never forget that thrashing!! The characters Robo, Pedro and Beres who play active roles in the story are very real to me. These were the names of my peers with whom I (Smith included) ate lunch, walked to and from school, every day for a number of years. These names are those of the Alston Boys Secondary School crew, we huddled together as birds of a feather, played football, cricket, basketball and even sang on the school choir.

I was a member of that 1972 football team written about in the story titled The Football Match. I could never for the life of me recall the ending score or what precipitated the match. What I always remembered was fighting an Irish guy Mickey Jaggers. Also normally if we had to be on the Ritz field after school, the crew would exit the field on the Yardley Green end and walk it home via Green Lane as we all lived, on that side of Small Heath. However, on this particular evening for more than just having had a hard game of football, I was hurting all over. I forgot about comradery, somehow exited on the Little Bromwich Road side , walked to the number 54 bus stop not too far from the Ritz, used my last two pence to catch the bus and ‘draw mi half dead ass’ home.

Lastly, depending on one’s experiences stories can be a powerful stimuli, Smith’s stories for me were like a shot of adrenaline given to the dying. Having completed Britannia’s Children I had a eureka moment; as a child of Small Heath this did not only plot the author’s Journeys, they were milestones of my own.

WOMAN is the story of Ivey and her life as she lived it for forty years. She left Jamaica as a young woman and went to England. Once there she studied to become a nurse, married, had children and was now a grandmother. On the eve of her sixtieth birthday, after a party to celebrate, she realized that forty years had gone by and she’d never returned to her family; realized that it was too long a time to spend away from those she’d left behind in Jamaica. She felt it was time to plan a vacation; it was time to go home…

LIZA is the story of a young girl who was raised by very stern parents. They insisted she have the education they didn’t and forbid her to date or have boyfriends as they would get in the way of her schoolwork. Liza wanted to be a lawyer but her mother would have none of that; she wanted her daughter to become a doctor, to give back to her fellow man so, under duress, that is what Liza decided to do. She aced her first year; studied hard and won grants to continue her education. She was her family’s shining star. Then she met Barry. How could so much positive turn into a very big and dark negative?

These are just two of the stories you’ll find in Britannia’s Children, a collection of short stories by Norman Samuda Smith.

Written in Jamaican patois, I felt drawn into the culture as I experienced the pain, joy, frustration and successes of the characters peppered throughout the book. There are lessons to be learned in this book; does Who Can’t Hear Must Feel make you think of a few?

Britannia’s Children is a look through the lenses of life; a colorful slice of the lives of the people you’ll meet as you turn the pages. It will show you that no matter who you are or where you come from, there are lessons and experiences that we all share in one form or another.

I enjoyed this book and I know you will too, especially if your roots are in Jamaica and you haven’t been home in a while.