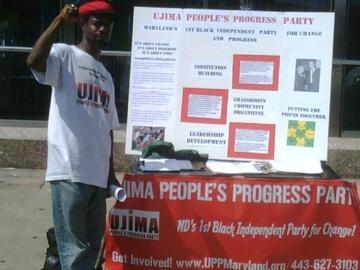 Lumumba, 40, and a solid core of about 15 volunteers-mostly community
activists-set up tables at various community and cultural events around the
state, hoping to spread the Ujima mission.

They need signatures from at least 10,000 residents to qualify as an
independent party and have their candidate's names listed on statewide
ballots.

If their ambitious plan is successful, the organization would be Maryland's
"first state-wide electoral party created and led by Africans," their
website reads. The Maryland Department of Legislative Services did not
confirm Ujima's claims by AFRO deadline.

Lumumba formed the Ujima party in the fall of 2009. The Morgan State
graduate, a full-time computer technician, said he realized many candidates,
who chose to be "political outsiders" and challenge established laws and
public policy, failed to build the strong base needed to win races. He
referred to the failed mayoral runs of progressive democrat Andrey Bundley.

President Barack Obama's election, he said, gave him the final push to
create the party. Although he was not an Obama supporter per se, he was
intrigued that a virtual unknown could captivate the nation, especially
generally apathetic young voters.

He says his tight knit team wants to capitalize on what remains of President
Barack Obama's energy to attack the "misleadership in the state," which they
say is fueled by Democrats.

Black politicians like Sheila Dixon and Jack Johnson "have clearly failed
the citizens," he says.

But Lumumba wants to debunk perceptions that Maryland and the Black
community don't have strong leaders.

"We have leaders.and what we want to do is take those leaders who are active
and have been doing things without the spotlight, and build up an (energy)
around them."

"It's up to the working class people to create a new party that supports
them," he added.
The reaction from the public, he said, has been strong.

That includes Ujima supporter the Rev. Annie Chambers of the D.C.-based
African Spiritual Love Ministry. "We need a party that will represent us and
speak for working people-both Black and White," she told the AFRO. The
69-year-old Baltimore resident says she knows the grim realities of the
poor, working class.

"Maryland is a state that has turned its back on the working poor," she
said. "We are a rich state, but we have whole families that go place to
place and live on the street. (Ujima) would give those same people power."

The growing political party is especially targeting young people, who Ujima
leaders say are looking for "bold and consistent" leadership. Lumumba says
politicians often fail to address the ballooning young Black unemployment
rate. "It's at 50 percent," he said.
But when the AFRO surveyed 20 to 30 year olds primarily from the
Baltimore-Washington D.C. area, many felt it would be difficult to stir up
young interest in Ujima or politics in general.

At least two said they would patronize Ujima, but were skeptical the group
could ever succeed past the "local level" because of divisions created by a
"Black" party.
It's "the 'United' States of America.," one Baltimore City college student
posted, emphasizing the "United."

Lumumba says one of his biggest struggles will be "breaking the myths" about
Black-led organizations.

"Our core leadership is Black but we open our party to all workers," he
said. "Working people have the same problems and needs. regardless of their
ethnicity."

The next and perhaps largest hurdle is fundraising. The group refuses to
accept money from large corporations and functions exclusively on funds from
individual supporters.
Win or lose, members of the group will continue to be activists within the
community, even during non-election years, Lumumba said.

The party has 3,500 signatures, so far, and needs the rest by spring. But
Ujima leaders say they are already grooming candidates to run city races in
Baltimore, Annapolis and Prince George's County this year, though they would
not reveal in which districts.

Lumumba said if the group can have an impact similar to the tea party's
reign on Republicans, he would be satisfied.

"If we can have that effect, get candidates and pressure the standing
candidates" to address our issues, "then all around we win," he said.