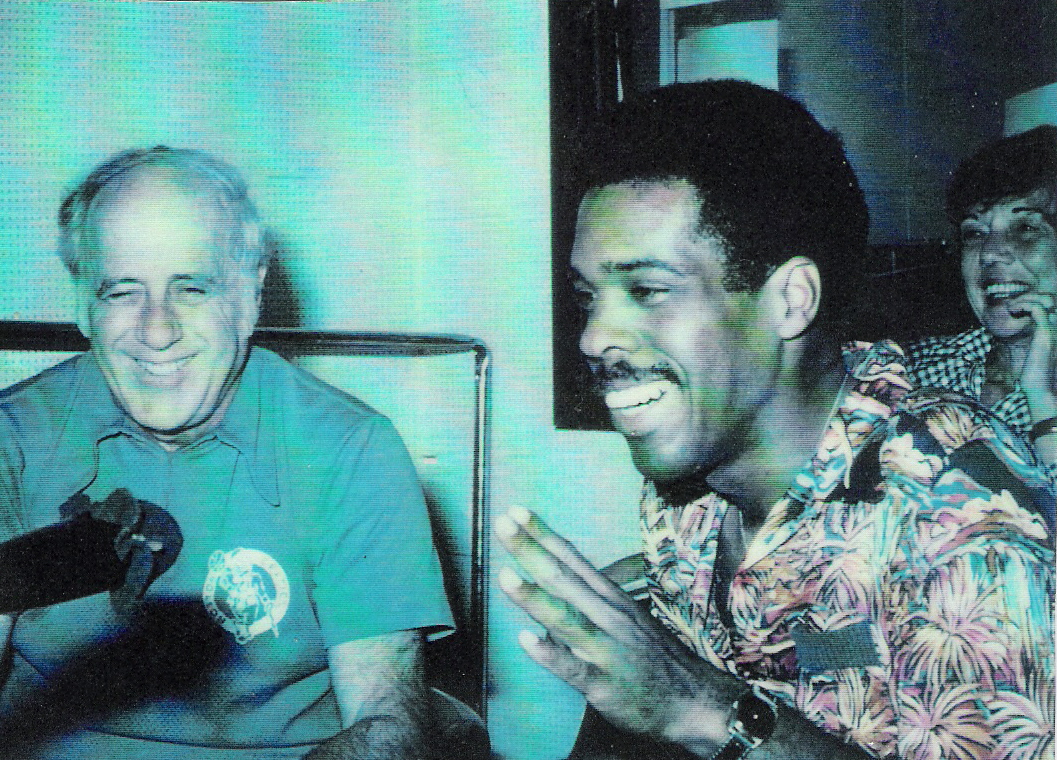 NBA legend Red Auerbach and abolitionist John Brown had more in common than the color of their skin. These two white men stood up for black folks when they could not stand up for themselves.

John Brown for example, is famous for leading a small group on a raid against a federal armory in Harper’s Ferry, Virginia (now West Virginia), in an attempt to start an armed slave revolt and destroy the institution of slavery.

He was born in Connecticut in 1800 and raised in Ohio, Brown came from a staunchly Calvinist and anti-slavery family. He spent much of his life failing at a variety of businesses–he declared bankruptcy at age 42 and had more than 20 lawsuits filed against him. In 1837, his life changed irrevocably when he attended an abolition meeting in Cleveland during which he was so moved that he publicly announced his dedication to destroying the institution of slavery. As early as 1848 he was formulating a plan to incite an insurrection.

In the 1850s, Brown traveled to Kansas with five of his sons to fight against the pro-slavery forces in the contest over that territory. On May 21, 1856, pro-slavery men raided the abolitionist town of Lawrence, and Brown personally sought revenge.  On May 25, Brown and his sons attacked three cabins along Pottawatomie Creek. They killed five men with broad swords and triggered a summer of guerilla warfare in the troubled territory. One of Brown’s sons was killed in the fighting.

By 1857, Brown returned to the East and began raising money to carry out his vision of a mass uprising of slaves. He secured the backing of six prominent abolitionists, known as the “Secret Six,” and assembled an invasion force. His “army” grew to include 22 men, including five black men and three of Brown’s sons. The group rented a Maryland farm near Harpers Ferry and prepared for the assault.

The wounded Brown was tried by the state of Virginia for treason and murder, and he was found guilty on November 2, 1859. The 59-year-old abolitionist went to the gallows on December 2, 1859. Before his execution, he handed his guard a slip of paper that read, “I, John Brown, am now quite certain that the crimes of this guilty land will never be purged away but with blood.” It was a prophetic statement. Although the raid failed, it inflamed sectional tensions and raised the stakes for the 1860 presidential election. Brown’s raid helped make any further accommodation between North and South nearly impossible and thus became an important impetus of the Civil War.

The black folks (NAACP) protesting the Boston Police Department for honoring Boston Celtic Coach Red Auerbach during Black History Month, should be reminded, “You don’t throw bricks if you live in a glass house!”

I remember when the black community in the late 70s was accusing the Boston Celtics of being the most racist team in the NBA on sports talk radio in Washington, DC. It was during an interview with Washington Post sports editor George Solomon on my Inside Sports talk show, I suggested that I write a column proving them wrong and I did.

I reminded black folks who didn’t seem to have a clue, in 1950 Chuck Cooper of Duquesne University and a second team All-American was drafted by coach Red Auerbach and owner Walter Brown. Cooper would become the first black player drafted and signed by an NBA team. The NBA is now the most integrated pro sports organization in America. Despite that fact, the plantation mentality still lingers, but the Boston Celtics are no longer the bad guys. The NBA history today is a watered down version of the history that I lived as a sports media personality. Inside Sports made its debut in 1970 on W-O-O-K Radio in Washington, DC.  The Bullets/Wizards were seating whites on one side of the half-court line and blacks on the other side of the half court line. A little known Black History fact; Red was the first coach to play five black players at the same time. He was first to hire the first black coach, Bill Russell and the first to hire a black General Manager, aka Bill Russell. During the tenure of owner Walter Brown and Red Auerbach the Boston Garden was a “Racial Free Zone.” The stifling racial strife in the city of Boston for the past several decades was not allowed in Boston Garden during Celtic games. When games were played in the garden the Redneck riff-raff had to check their KKK robes and hoods at the gate and replace them with shirt and tie, or blue jeans and tee-shirts. Boston Garden security had orders to show the exit to those who did not comply.

When the basketball hall of fame had forgotten the contributions of pioneer Earl Lloyd the first black player to play in an NBA game in 1950, Red, sports columnist Dick Heller and yours truly reminded them. 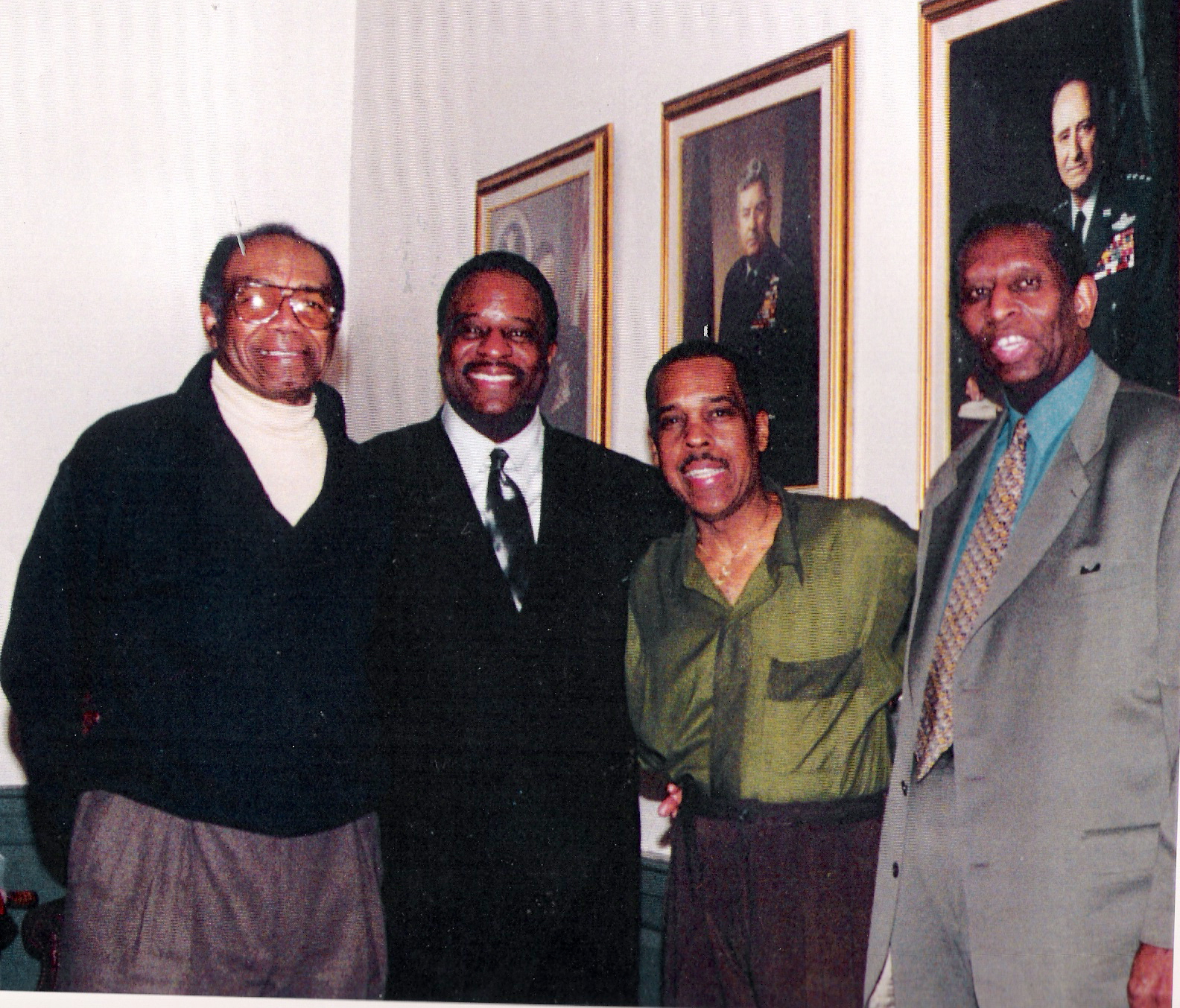 When Earl brought his omission to my attention and ask for my help, I invited Boston Celtic NBA Hall of fame player Sam Jones, CBS/NFL studio host James Brown, WOL Radio One talk show host, Butch McAdams, Andrew Dywer and Christy Winter-Scott of The Round Ball Report to have lunch with me at Union Station to discuss a Game Plan to get him inducted into the hall of fame.

The timing could not have been better, the NBA All-Star Game was to be played in Washington, DC at the MCI Center in February 2001 and it was just a few months away. I laid out the plan to honor Earl during that weekend. First event would be in his hometown of nearby Alexandria, Virginia with a Earl Lloyd Day. There would be a youth basketball clinic and a tribute in his honor later that evening in Washington, DC at the historical Bohemian Caverns. James Brown had agreed to co-host the tribute with NBA/Playground Basketball legend Sonny Hill.

In a conversation with James on our exit from Union Station he asked me, “Harold did you check with Abe Polin?” I pretended I did not hear him and I asked him to repeat himself and he did. I could not believe my ears, my response, ‘I don’t work for Abe Polin and he ain’t my father!’ He said, ‘OK’ and made his exit never to be seen again. The next time I saw him and questioned him about his disappearance. He said, ‘I don’t remember making that comment’ and he has been lying ever since.

The evening turned out to be a winner, my ace in the hole was NBA Godfather Red Auerbach. There was a sabotage attempt, but the tribute was a success and it was the only All-Star event Red participated in that weekend.  Basketball royalty was in attendance, K C Jones, Al Attles, Earl Monroe, Phil Chenier, Jim ‘Bad News’ Barnes,Sonny Hill, Sam Jones, Wizards' coach Leonard Hamilton, and Clarence ‘Bighouse’ Gaines.

Earl Lloyd was finally inducted into the Naismith Basketball of Fame in 2003 over fifty years later. Thanks to Red Auerbach, and Washington Times sports columnist Dick Heller without them Earl never would have made it, better late than never.

There is a familiar warning, “If you don’t know your history you are bound to repeat it!”

We were warned by the Kerner Commission in 1968. They were assembled to find out the reason for the uprisings in the inner-city, “they forewarned that we were headed for two different societies, one black and one white, seperate and unequal” and here we are.

The Kerner Report was released on February 29, 1968, after 7 months of investigation. The Report became an instant best seller, and over 2 million Americans brought copies of the 246 page document. Its finding was that the riots resulted from black frustration and a lack of economic opportunity. Dr. King pronouced the report as a “A Physician’s warning of a approaching death, with a prescription for life.” The prescription had no refills.

The Kerner Report suggested that one main cause of urban violence was white racism and suggested that white America bore much of the responsibility for black rioting and rebellion.

The report berated federal and state governments for failed housing, education and social-service policies. The report also aimed some of its hashest criticism at the mainstream media, “The press has too long basked in a white world looking out of it, if at all, with white men’s eyes and a white perspective.”

For the past 50 years black leaders, politicians, ministers, judges, educators, law enforcement, media personalities and especially my hero, Congressman John Lewis and the Congressional Black Caucus have sit on their hands singing, “We Shall Overcome” while doing absolutely nothing to improve the plight of the poor and down-trodden.

First, they made Bill Clinton “The First Black President” to keep hope alive and he did absolutely nothing. The first Black President Barack Obama took the country by storm and at last the caucus was singing a brand new song, “Free at Last—Free at last!” By the time President Obama made his decision to attend his first ever Black Caucus Week End Dinner, his first words to them was “Stop complaining.”

Enter surprise, President Donald Trump. His first words to Congressman John Lewis after Lewis called him a illegitimate President, “All talk and no action.” Trump’s response is equivalent to Obama’s shout out to the Congressional Black Caucus. The problems that people of color are having were decades in the making, long before Donald Trump. You cannot lay all of this BS at Trump’s White House. He deserves the credit for opening the closet door and allowing the bigots to come out in full force.

Red Auerbach's won-lost record in Human and in Civil Rights was and is nothing to sneeze at----he was in a class by himself. When I coined the phrase, "Every black face you see is not your brother and every white you see is not your enemy" it was Red and President Richard Nixon, they were my inspirations.  How can we make February Black History Month and ignore the contributions of white folks?

Two wrongs don't make a right. Red Auerbach, and the Brown Boys, Walter and John--the common denominator, they freed a lot of people.  My question, to the NAACP and the Congressional Black Caucus, what is in your wallet?

Red Auerbach's won-lost record in Human and in Civil Rights was nothing to sneeze at----he was in a class by himself. The NAACP didn't do their homework if they had read its own history, they would have seen they honored Red during their first Black History Month program in 1960. His many contributions to human and civil rights were off the charts.

How can we make February Black History Month and ignore the contributions of white folks? Two wrongs don't make a right. Red Auerbach, and the Brown Boys, Walter and John--the common denominator, they freed a whole lot of people.  My question to the NAACP and the Congressional Black Caucus, whats in your wallet?  I would like to close out the blog by giving Red the last word.