As it stands now, the GOP will never win another presidential election.

Let me explain what I mean: 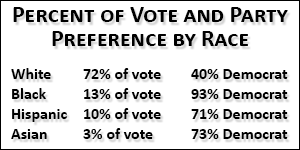 The American electorate has changed, and with it - so too has the formula to win elections.

The GOP's goal of turning out their base of older, white voters and winning over independents is no longer sufficient to win presidential elections.

For too long the GOP has been content with just appealing to white voters. We will never heal America and win consistently until conservatives are just as successful in attracting minority voters as white voters.

Both President Reagan and Mitt Romney won the white vote by 20 points - Reagan won in a landslide but Romney lost.

The white share of the vote has dropped 15 points over the past 6 presidential elections, and only 20% of the nation's population growth over the next 15 years will be white.

Right now, minorities give Democrats a solid base of 24% of the total vote count. Add in the white vote, and Democrats will maintain AT LEAST 51% of the vote in all future elections.

At this rate, it will be mathematically impossible for the GOP to win another presidential election without engaging minority voters.

And the best way to engage minority voters is to recruit black conservatives to run for public office and push them to victory - which is precisely what Black America's PAC (BAMPAC) is doing!

Please support BAMPAC's efforts with your most generous contribution TODAY.

Let me tell you, the solution to this problem is not as difficult as it may seem. In fact, the best solution will result in the destruction of the Democratic Party.

For decades, liberals have promoted misguided racist policies that have denied opportunities to the poor, corrupted our morals, and bankrupted our nation. 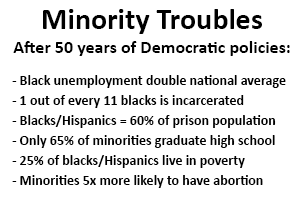 They've done it by manipulating minorities with the Big Lie that Republicans are all racists - and that lie is guarded by the liberal media like the gold at Fort Knox because they know the truth could send their house of cards crashing down on top of them.

This lie is liberal kryptonite - they die politically if the truth overcomes their lies.

The adversity currently facing the GOP because of liberal racist propaganda could is a great opportunity that could ultimately end up leading to their political downfall.

You and I must penetrate the fog of lies and get the truth to minority communities throughout America by supporting conservative minority candidates like Mia Love and Tim Scott.

So please make your most generous contribution of $75 to help BAMPAC push conservative minority candidates to victory.

Now, I'm not asking you to abandon conservative values by "handing out" support to minority conservatives because they are minorities.

Quite the contrary - let me tell you something about conservative minorities...

I speak from experience when I tell you that black, Hispanic, and Asian Republicans are firm in their commitment to conservative principles because they are tested on their beliefs every single day by Americans with ill-conceived notions that conservatism only works for old, white men.

You and I both know that's not true, but that message doesn't reach minority communities because of intentionally propagated lies about conservatism and incitation of racial tensions by liberals hoping to maintain an iron grip on the minority vote.

The truth is simple: conservative minority candidates - like Mia Love and Tim Scott - are on the political front-lines fighting to break down the racial divide in politics.

The message of conservatism easily resonates with minorities, but the message can't penetrate the liberal fog of lies without conservatives like Mia and Tim.

It is no longer acceptable for you and me to know the truth without fighting to discredit the lies.

So join the fight by making a contribution of $75 or more to BAMPAC TODAY.

BAMPAC is run by black conservatives whose goal is to destroy the negative outlook on conservatism in minority communities in order to bridge the racial divide in politics.

We do this by supporting conservative minority candidates as they spread the message of conservatism where it is needed the most - throughout America's minority communities.

That's why BAMPAC is so important.

So please make your most generous contribution of $75 or more TODAY to help BAMPAC reach minorities with the message of conservatism.

You and I can't allow the recent influx of minority Republican candidates throughout America go down in defeat.

We must work together to push these "tried and true" conservatives to victory, so they can protect our conservative values in Washington and spearhead the minority outreach the GOP so desperately requires.

If you and I fail, then we lose this golden opportunity to usher in a new era in American politics by bridging the racial divide that keeps minorities voting Democrat.

Those votes will turn into bigger government, higher taxes, increased deficit spending, further erosion of our God-given rights, and the rapid decay of morality in America.

Do your part TODAY with a donation of $75 or more to BAMPAC.

If you can't afford $75, then please contribute whatever you can afford.

BAMPAC is committed to pushing "tried and true" conservatives like Mia Love and Tim Scott to Washington.

But BAMPAC can't forge a new path for the GOP without your help.

Time is running out to make a change in 2014, so please take action today.

Thank you for your support.

P.S. Without reaching out to minority voters, the GOP will never win another presidential election.

So make your $75 contribution TODAY to help BAMPAC forge a new path for the GOP.