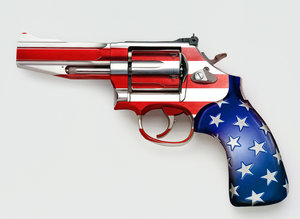 I have offed and will continue to offered the Obama Administration a solution to American Gun Violence, and hope that President Obama develops the moral courage to respond to it. I question whether their is a serious commitment to addressing Gun Violence in America because politicians refuse to have a discussion with me about a solution to Gun Violence, while offering no viable alternative solutions.

President Obama gives great emotional speeches after each gun violence tragedy, but he has refused to discuss with me a solution offered to his administration several years ago.  It’s called Nonlethal Bullet Exchange Solution:  It would allow communities, counties and states to use the Ballot Initiative Process to Vote themselves dry (Ban) the ownership and sell of Lethal Bullets and provide a free Lethal Bullet Exchange Program that would provide NonLethal Bullets (one for one). It would provide an exception for Licensed Hunters with a specific rifle made for hunting Animals. It would create a new law that allow prosecutors to charge anyone owning or using Lethal Bullets in the jurisdiction with a felony and if fired at another human being, a prosecutor could charge them with Attempted Murder or Murder, if a death results.  This Gun Violence Initiative would give citizens the right to Self-Determination and it does not require political games played by politicians, nor would it infringe on Citizen’s Second Amendment Right to Keep and Bear Arms.

Neither the loss of our innocent babies, murdered at Sandy Hook Elementary School nor the massacre at Emanuel African Methodist Episcopal Church in Charleston, South Carolina has moved politicians and President Obama to embrace a solution to Gun Violence.  While ignoring my NonLethal Bullet Gun Violence Solution, lives have been unnecessarily lost.  It takes Presidential Leadership with the moral courage to be open to all ideas and solutions, even those solutions offered by someone who look like me.

I invite Americans Organizations and Citizens, who are serious about a Gun Violence Solution for their community, city, county, state or our nation to contact me.  As a Black African American Inventor and Entrepreneur, I created a smartphone App named Petition 4 Power, that will help you collect the required number of petition signatures to get this Gun Violence Initiative on the ballot. https://youtu.be/JWaDHTMdoos  Good Leaders solve problems without fear or excuses.