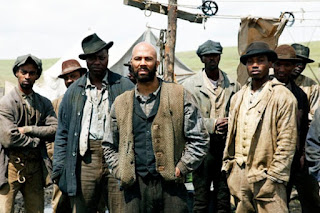 The dilemma of slavery continues to dog the United States of America  (USA) 137 years after Pres. Abraham Lincoln signed the Emancipation  Proclamation (1862) freeing only the slaves held in the South.
Many historians say emancipation caused more problems than it solved.  These learned scholars opine that the Civil War was unnecessary because slave masters would have ended slavery because they would have realized supporting slaves was too great an  economic burden and that free labor was more productive.  However,  slavery was about more than economics and productivity.  Slavery was  the base of a value system that defined the Southern way of life.  It  was tied to a Southerner's sense of personal worth and upon which the house of cards of  the Confederacy was built.
For the Southern gentry, it was not simply a question of freeing or not freeing slaves.  The proposition was intimately related to a  society's unwillingness to accept as human property it was taught to  see as brut animals one owns like a horse or cow.  Slavery's belief  system attributed everything good/righteous  to white people and  everything bad/evil to blacks.  Synonymous to the mind-set of English  lords, families that owned slaves were bred to believe in their inherent right to be masters just as they bred into slaves the rightness of being owned.  People who believed in that system could  never accept that the stroke of a pen could rob them of an entitlement  to which whites clung so tenaciously for generations and sacrificed  tens of thousands of lives to preserve.
The reality is Lincoln's signature did not undo the mental underpinning that justified slavery and the dehumanizing process of  white supremacy that was supported by the socioeconomic,  educational, religious and political systems in the US.  Incidents such as those  that occurred in North and South Carolina recently are endemic to the  15 slave states and find their geneses in the forlorn hope of  returning to that erst while existence before emancipation.  That hope  is nurtured by Article I Section II of the US Constitution and state practices and policies that give rise to unresolved psychological  issues left over from slavery. 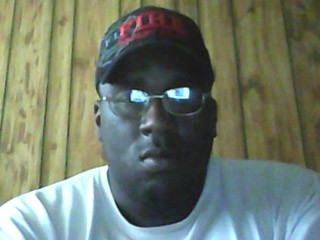 First in South Carolina, Anthony Hill, 30, a black man, was shot in  the head then dragged behind a truck for 11 miles, leaving a foot-wide  dark stain on the asphalt (6-2-10).  Newberry County sheriff's  deputies said the bloody trail led them to the mobile home of Gregory Collins, 19, a white man now charged with murder. The County Sheriff  said the two men who were employed by Louis Rich, a chicken processor  in Newberry, had spent most of Tuesday together at Collins' mobile  home, where Hill was shot early Wednesday morning.  The FBI has been  called in to assist in what is obviously a "hate crime."
These types of gruesome "hate crimes" continue to occur from Texas to  West Virginia.  Such murders are not the result of wanton violence because the perpetrators are always white men and the victims black.  They are reminiscent of  ritualistic lynchings that were so popular from the 1890s through the 1940s.  They seem to be a result of latent or repressed rage that surfaces uncontrollably when a black man is perceived as challenging the master's status.
The aforementioned historians would readily reject this hypothesis but when people who have been immersed in the use of dehumanizing hatred  which is tied to their sense of worth and power lose status to those  that are dehumanized, the affect can be intolerable.  Under such  circumstances totally despicable acts can result.
The next example relates to children.  Breeding slaves meant offsprings were notA 150-year-old photograph discovered in an attic in North Carolina revived haunting images of the faces of American slavery. The picture shows two young black barefoot slaves, wearing ragged clothes, perched on a barrel. 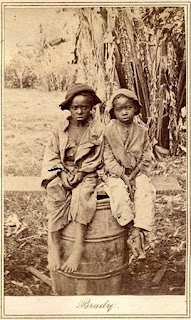 children worthy of compassion but they were "pickaninnies."
The photo, which may have been taken in the early 1860s, is believed to be of a boy named John and an unidentified companion.  Will Stapp,  a photographic historian and curator for the National Portrait Gallery  at the Smithsonian Institution said the picture is "A testament to a  dark part of American history. What you are looking at when you see  this photo are two boys who were victims of that history."  Found during a moving sale in Charlotte in April, the photo was accompanied by a document detailing the sale of John in 1854 for $1,150.
Keya Morgan, New York collector, who paid $30,000 for the photo album  which included the young boys and several family pictures and $20,000  for the sale document proclaimed, "I buy stuff all the time, but this  shocked me.  A portrait of slave children is rare." Morgan believes the home in which the photo was found was owned by a deceased descendant of John. "This kid was abused and mistreated and people forgot about him.  He doesn't even exist in history. And to know that there were millions of children who were like him, I've never seen another photo like that that speaks so much for children."
Stapp said the photo was probably taken by Timothy O'Sullivan, an apprentice of Mathew Brady, the famous 19th-century photographer whose  portraits of historical figures such as Pres. Abraham Lincoln are legendary. O'Sullivan photographed what is believed to be some of the first slaves liberated after Lincoln issued his preliminary Emancipation Proclamation (1862).
Harold Holzer, an administrator at the Metropolitan Museum of Art and an author of several books about Lincoln said, "To me, it's such a moving and astonishing picture. Abolitionists circulated photos of adult slaves who had been beaten or whipped, the photo of the two boys  is more subtle," only suggesting their horror.  Thinking of children who from birth to death, lived the dehumanizing misery of slavery, Ron Soodalter, an author on slavery and member of the board of directors at the Abraham Lincoln Institute in Washington, D.C. said, "The photo depicts the reality of slavery. This picture shows that the  institution of slavery didn't pick or choose. This was a generic  horror. It victimized the old, the young."
The absence of John and millions of slave children like him is no accident of history; they have been deliberately edited out of history by academicians who frame and write it.  Controlling that process is jealously guarded by universities; Dr. M. Cookie Newsom, director for diversity education and assessment at the University of North Carolina, Chapel Hill declares. "Faculty diversification for universities is seen as "affirmative action."  There's no delicate way of describing the lack of commitment many top research universities demonstrate as they talk about diversifying their faculties."
When confronted with the dismal statistics, Newsom says university decision-makers offer: 1) There are not enough qualified candidates of  color; 2) There is no need to interview them because they are in high  demand from other institutions; and 3) They are too expensive. Recalling an instance at UNC where a black female staff candidate was  disqualified on the claim she didn't "fit well" and because she "spoke  too loudly," Newsom proclaimed "Underlying the excuses is an insidious  presumption of inferiority. Diversity research has not focused on the  inner workings of the tenure process in committees.... that is where  most of the biases emerge."
Newsom's conclusions are drawn from research and statistics that show,  while peer research institutions have documented plans to retain and  advance minority faculty, the outcomes reflect nothing more than lip  service. "If you are an African-American, American Indian or Latino  with a Ph.D., your odds of ever receiving tenure at a Research I  (school) are between slim and none." Between 2001 and 2007, black  professors consistently represented just 3 percent or less of tenured  or tenure-track faculty year after year at Harvard University, Ohio  State University, University of Florida, University of California at Los Angeles and Berkeley, University of Illinois, University of Texas, Stanford University and the University of North Carolina, according to the National Center for Education Statistics.
"It's racial discrimination," she said unapologetically. "We know what's wrong; there is inherent bias in committees and negative perceptions based on race.  "Institutional racism' is just the door blocking entrance, once inside scholars find other superficial barriers for junior faculty, including overburdening service work,  undervalued qualifications, and the lack of mentorship and support from senior faculty," Newsom reiterated.
Myths, misconceptions, deliberate distortion and outright lies taught about black people during slavery are still a part of white folklore regarding African Americans and continue to be taught.  These socioeconomic, educational, religious and political processes serve the same purpose now they did during slavery; they are the base of an American value system that defined a way of life -- white supremacy.  This value system is no longer tied to just southerners' sense of personal worth and power; it is as American as the "Tea Party Movement."  For a white man, there is no worst position or condition to be in than to be beneath a black man, because he is educated to see  a black as totally worthless.
The continuing dilemma of slavery is the shared value it holds for whites, so much so, they support each other as though status in the US is a zero sum game.  The US Constitution still values slave descendants as 3/5 of white men.  That is why the status of slave descendants can not be allowed to change.  Whites are educated to  believe they deserve a status above blacks and the failure to achieve it can trigger the kind of response displayed by the young man in South Carolina.  White supremacy is a psychological disease left over from slavery that affects most white Americans and black people suffer  its effects as institutional racism and acts of violence.
REPRINTED/EDITED A Continuing Dilemma: Slavery, By John Burl Smith

Footnotes:
Hell on Wheels (TV series)
https://en.wikipedia.org/wiki/Hell_on_Wheels_(TV_series)
A haunting 150-year-old photo found in a North Carolina attic shows a young black child named John, barefoot and wearing ragged clothes, perched on a barrel next to another unidentified young boy.
Pasted from http://www.nbcnews.com/id/37623310/ns/us_news/t/rare-photo-slave-children-found/#.VwxFcOImxFo
Mathew Brady Biography Photographer (c. 1823–1896)
Pasted from http://www.biography.com/people/mathew-brady-9223725
Timothy H. O'Sullivan
Pasted from http://americanart.si.edu/collections/search/artist/?id=3600
“The stunning account of modern-day slaves and traffickers in the land of the free”
Pasted from http://ronsoodalter.com/home/index.asp
Scholar Says Research Universities Not Serious About Faculty Diversity
Pasted from http://diverseeducation.com/article/13868
South Carolina police: Black man shot to death, body dragged
Pasted from http://www.syracuse.com/news/index.ssf/2010/06/south_carolina_police_black_ma.html
The dragging of Hill's body sheds light onto how much the death and destruction perpetrated upon African-Americans in this country hundreds of years ago still resides in this country's DNA.
Pasted from http://www.africanamerica.org/topic/death-of-south-carolina-man-shot-and-dragged-for-ten-miles-investigated-as-hate-crime?reply=168056827305523459