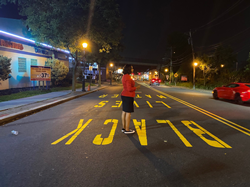 Shortly after last night’s virtual vote to memorialize the centennial anniversary of the Red, Black & Green flag by Union County Freeholders, Freeholder Angela Garretson supported a project to paint #BlackLivesMatter on Liberty Avenue in Hillside after last night’s board meeting. Cities and towns across the nation are painting similar #BLM murals and signs, so Garretson made Hillside’s painting a teachable moment in Black History. With this timely painting and historic vote, she juxtaposed the historical significance of a flag for Blacks against our country’s current need to understand the importance of the #BLM movement.

On August 13, 1920, political activist Marcus Garvey announced that the red, black & green flag would represent Blacks around the world. During a month-long convention held in New York City’s Madison Square Garden, The Universal Negro Improvement Association and African Communities League (UNIA-ACL) accepted Garvey’s recommendation and adopted his resolution regarding the flag. Although the flag played a prominent role during both the Civil Rights and the current #BlackLivesMatter movements, few people know its history or significance. Garretson and her County colleagues seek to ensure that all residents recognize the meaning of the red, black & green flag by honoring its centennial anniversary.

“I am committed to uplifting, educating, and uniting all Hillside community members through empowerment and understanding,” said Union County Freeholder Angela Garretson. “Even as we celebrate the 100th anniversary of the red, black & green flag, members of our community still struggle in understanding the rationale behind the Black Lives Matter movement. As we raise our flags and celebrate Blacks around the world, let’s be reminded that there is still significant progress to be made,” Garretson continued.

When Garvey presented the flag 100 years ago, The colors, red, black and green, became ‘the colors of the African race.’ Many African nations adopted these colors as a symbol of their sovereignty. And, the flag has been used by thousands of organizations that carry on the struggle for nations and movements in support of the Black community.

Just as the red, black & green flag was strategically designed and adopted to elevate Black community around the world, Hillside’s street painting was intentionally planned to connect the past and present. On this centennial anniversary of the red, black & green flag, Garretson and the streets of Hillside, NJ remind us that Black lives must matter in order to build an equitable society for all citizens. This deliberate and intentional teaching moment also demonstrates Union County’s commitment to education, history, and the residents of Union County.

About Union County: Nestled within northeastern New Jersey, Union County is home to an ethnically diverse population of approximately 556,341. Governed currently by nine Board of Chosen Freeholders, the county hosts plenty of waterfronts and parks.

About Angela Garrison: Angela Garretson has over 19 years of political, civic and higher education experience. Professionally she is responsible for developing strategic initiatives and partnerships in a senior-level role at New Jersey Institute of Technology, as the Chief External Affairs Officer. Previously, Garretson worked for Rutgers, The State University of New Jersey ‘s Newark and New Brunswick campuses. Angela has supported her Township of Hillside, NJ community as a school board member, council president, and Mayor. A lifelong Hillside resident, Angela now proudly serves Union County as a County Freeholder and community leader.