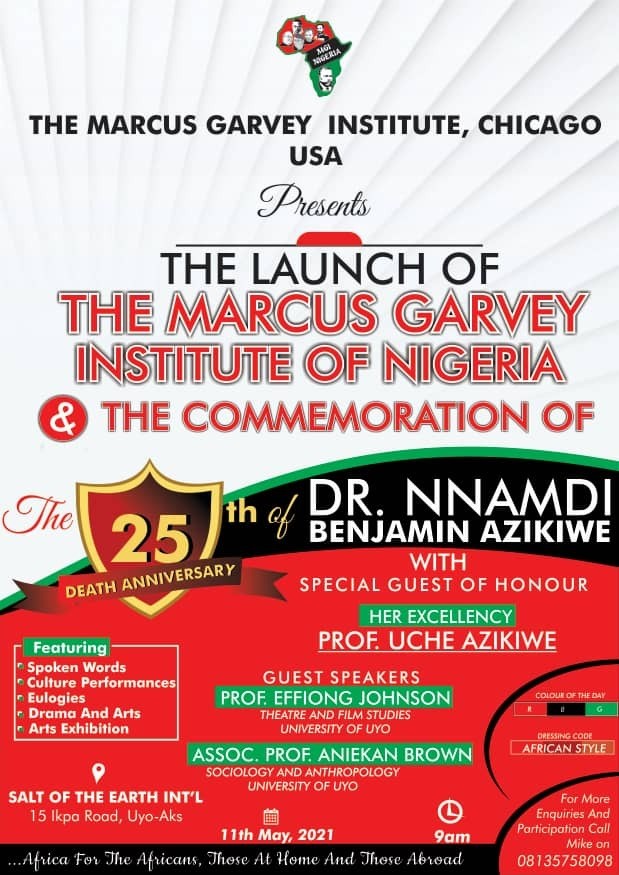 The Marcus Garvey Institute (MGI) of Nigeria headed by President Michael Joseph Harry, is holding its first commemoration for the passing of Nigeria's first President, His Excellency Nnamdi Benjamin Azikewe (b.16 November 1904, d. May 11, 1996). Encouraged by the founder of the MGI of the World, President General Shaka Barak in Chicago, President Harry organized a Division of the MGI in Nigeria, which has taken on a great responsibility to educate his fellow country women and men, about the life and works of the Jamaican born, Honorable Marcus Mosiah Garvey (b. August 17, 1887, d. June 10, 1940) the founder and first President General of the Universal Negro Improvement Association and African Communities League (UNIA), and one of the greatest Universal African Nationalist leaders the world has known. The Hon. Marcus Garvey and the Hon. Nnamdi Azikewe both embraced the idea of 'Africa For the Africans, Those at Home and Those Abroad' in the 1920's and 1930's, making the Hon. Nnamdi Azikewe eventually to be known as the 'Father of Nigerian Nationalism.' Therefore, at this event in Uyo, Akwa-Ibom, Nigeria,  of the commemoration of 25th Anniversary of the Hon. Nnamdi Azikewe's passing, MGI members and guest who attend will learn from scholars and professors from the University of Uyo, and the community, who the Hon. Nnamdi Azikewe (President from 1963-1966) was and what he meant to Nigeria in particular and Africa in general.  Whether Nigerians are at home on the continent of Africa  with a population of almost 200 million people, or are living abroad, this celebration is about you and for you. Please contact President Michael Harry,  and let him know that you support this great effort in any way that you can, with moral, financial and encouraging support.  President Harry is very young so please rap your arms around him and help hold him up with your love. We only have a few days left, but doors will be open to every Nigerian throughout the country who wants to honor and pay tribute to their first President Nnamdi Azikewe, considered the major driving force behind the nation of Nigeria's independence. Please see the attachment below.
SOURCE: