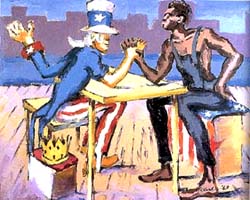 Who Asks the Negro?


We see when the father of the Nigerian "terrorist" went to authorities about his son, no one listened. At Virginia Tech University when Nikki Giovanni and another sister, a dean, told University authorities the mass killer was a strange little sick puppy, no body listened to the black sisters.

No one asks the Negro (North American African) anything on any subject, not even his own past, present or future. As a colonized being (mentally suffering from the addiction to white supremacy) he/she is disqualified to speak on events in the global village, again, even his own village. Have you heard a Negro speak on the present depression and his solution? Will any Negro dare speak about Israel and Palestine? Will a Negro be asked his views of China, North Korea, Iran, Afghanistan, Iraq, Cuba, Venezuela?

After all, these topics are beyond the capabilities of the Negro mind that is proscribed to issues in the hood--even then, there are Negro leaders who address his condition in the hood, but only within the bounds of traditional Negro thought that is filtered through white supremacy philosophy such as failed academic thought, bankrupt religious ideology and mythology, or hip hop poppy cock accompanied by nursery school beats and rhymes. One can listen to the news (BBC,ABC, CBS, NBC, FOX, CNN,BET, MTV, Amy Goodman, NPR, Pacifica Radio, Link TV, C-Span, black and white newspapers, Internet media, Final Call, Ebony, Essence, Vibe) until late into the night, yet not find a Negro speaking on any subjects listed above.

What media is bold enough to ask the Negro his views of the neo-Chinese revolution? Does the Negro have the mentality to express his views on Cuba, a nation filled with African and African mixed people? Brazil has l00 million Africans, why not ask the Negro how he feels about his brothers and sisters in Brazil, especially since President Lula of Brazil recently chided white people for thinking they know everything, yet are responsible for the worlds poverty, ignorance and disease, including the present global financial meltdown.

Yes, the white man's diseases are worse than his guns (read the classic Race and Cultural Contacts in the Modern World by E. Franklin Frazier). We may have thought a half black president would have views different than the white man, but no, Obama's views are identical. He wants to bomb Iran, occupy Afghanistan, expand into Pakistan, recolonize Africa, with a military force established on the continent as we speak.He will bomb North Korea if it doesn't submit to the will of white supremacy.

But who has the most nuclear bombs, planes, tanks, ships, so as Nelson Mandela said, America is the most dangerous nation to world peace. During Katrina, Venezuela, Cuba and other nations wanted to aid the victims but the Negro wasn't "allowed" to accept aid from such nations because the white man doesn't approve of these nations.

So the Negro must be a child, some kind of stunted man, not mature enough to make decisions for his existence even when it is at peril. The Negro has sat watching the US government give trillions to the same global financial bandits, corporations, bankers that are directly responsible for the meltdown. Yet no one has asked the Negro what he needs in the present crisis, although he was scammed out of his national wealth with the sub-prime schemes.

Why doesn't the Negro qualify for a trillion dollar infusion of stimulas funds? Isn't he in worse shape than Wall Street, General Motors, United Auto Workers combined? Doesn't the Negro need a Marshall Plan or some kind of assistance that will help him reconfigure his economic power that doesn't seem to benefit him even though he is the 16th richest nation in the world?

American paid the insurgents in Iraq's Anbar province to stop the violence. America, through Iraq's tribal leaders, gave employment to the so-called terrorists. It is presently doling out billions to pay the Taliban in Afghanistan to lay down their arms and join the dope dealing government of Karzai, the mayor of Kabul, called president of Afghanistan.

Why can't America do the same for the brothers and sisters terrorizing the hood--why is it so difficult to figure out that violence in the hood will decrease when there is employment with a living wage? The world is meeting in Copenhagen as we write. What is the Negro's opinion on global warming? Does he believe man is more powerful than Mother Nature? Can man really stop the ocean from rising, the polar ice from melting, earthquakes, tsunamis, drought?

Is it possible Mother Nature is ready to remove man from the earth, that he has failed to learn how to live on earth in peace, therefore the time has arrived for him to be removed--and sadly, the innocent must go to, yes, those who have sat around doing nothing but praying and crying crocodile tears. Oh, America, you have polluted the earth, polluted man, the animals, the water, the food, and now a force is coming to take you out. "No more water, the fire next time." Ask the Negro.