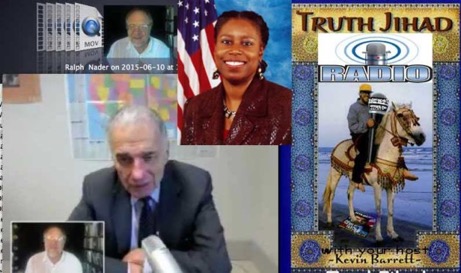 Ralph Nader and Cynthia McKinney: Two presidential candidates actually worth voting for share the spotlight on Truth Jihad Radio, asking what has happened to our country in the wake of 9/11.

Has the post-9/11 US government become totally non-responsive to its citizenry? That is the upshot of Ralph Nader’s Return to Sender: Unanswered Letters to the President, 2001-2015. The book consists of Nader’s dozens of letters to Presidents Bush and Obama. Only a few were even acknowledged; none received any thoughtful response.

If bestselling author Ralph Nader – America’s first citizen, perennial presidential candidate, named by the Atlantic magazine as one of the 100 most influential figures in American history – cannot even get the courtesy of an acknowledgment for these apropos, well-argued, well-informed letters, what hope do the rest of us have for a dialogue with power? Have the imperial presidency and the deep state behind it become completely deaf to the concerns of ordinary citizens, not to mention extraordinary ones like Ralph Nader?

And does the 9/11 inside job bear some responsibility for this sorry situation? As I point out to Ralph, Return to Sender does not address 9/11 or election fraud – the two elephants in the living room of the controlled demolition of American democracy. Fortunately, unlike Bush and Obama, Ralph Nader actually responds courteously and rationally to uncomfortable questions. He makes it clear that he sees serious problems with the official story of 9/11, and calls for the issue to be debated openly.

Second half hour guest: Another of the rare presidential candidates who has actually been worth voting for is six-term Georgia Congresswoman Cynthia McKinney, who takes up where Ralph Nader left off, spelling out exactly what happened to American democracy, and why, in the wake of the 9/11 false flag operation. Short version: We have wasted trillions of dollars, destroyed our economy, shredded our Constitution, ruined our credibility, besmirched our good name and relinquished our strongest asset, the “soft power” that comes with respect…for what?

In this interview we discuss discuss the clear progression from:

How many six-term Congressional reps have the guts to tell such hard truths? Only one. Listen to her and be amazed.

Dr. Kevin Barrett, a Ph.D. Arabist-Islamologist, is one of America’s best-known critics of the War on Terror.

He is Host of TRUTH JIHAD RADIO; a hard driving weekly LIVE call in radio show.He also has appeared many times on Fox, CNN, PBS and other broadcast outlets, and has inspired feature stories and op-eds in the New York Times, the Christian Science Monitor, the Chicago Tribune, and other leading publications.

Dr. Barrett has taught at colleges and universities in San Francisco, Paris, and Wisconsin, where he ran for Congress in 2008. He currently works as a nonprofit organizer, author, and talk radio host.

Silence is the deadliest weapon of mass destruction.