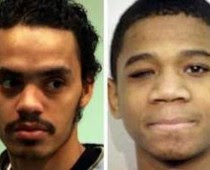 Davontae Sanford, a developmentally disabled 16-year-old, sits in prison after his lawyer says he was coerced to confess to killing four people in a rumored drug house on Detroit's east side. An admission from a confessed hit man could finally win him a new trial.

Vincent Smothers, who had already confessed to killing at least seven people, including the wife of a Detroit police sergeant, also has admitted to being responsible for the September 2007 drug house killings on Runyon, according to police and Sanford's appeals lawyer.

We're hoping to get his plea withdrawn so he can go to trial in light of this new evidence, this was a false confession made by an adolescent who is a special-ed student and who reads on a third-grade level

We believe that if we can get enough people to write and mail letters to Vincent Smothers pleading with him to confess to the murders in court, he may have a change of heart and speak on Davontaes behalf.

Together we could stand up for Davontae, write Vincent Smothers direct and make a plea for assistance on Davontae's behalf.

'Positive reinforcement encourages and perpetuates behavior. Attention is power. Whatever we give our attention to increases.'

You can read this request and then forget, or you can take hold of your pen and make a difference, which will you choose?

Tags: <a href="http:freedavontaesanford-irishgreeneyes
E-mail me when people leave their comments –
Follow