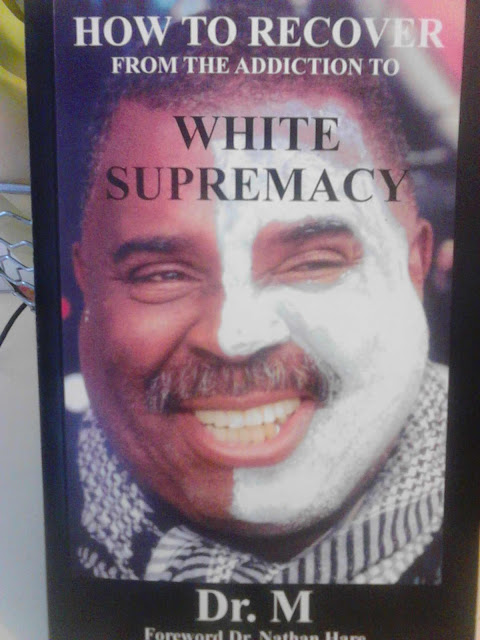 When I announced the title of my recovery manual How to Recover from the Addiction to White Supremacy, people told me not to entitle the book as such but call it How to Recover from White Lunacy because lunacy is deeper than supremacy. Supposedly, supremacy suggests a certain level of sanity but according to my advisers and the elders white people are simply insane and supremacy is only a part of their insanity. Elijah Muhammad asked us why don't white people want us to have social equality with them? Answer: because if we have social equality with them we will discover how nasty and filthy they are. Was Elijah right? Yes! But Jesus told us even more about them. He said they are liars and murderers who abide not in the truth. He said if God were your Father you would love me but you seek to kill me because I tell you the truth. Has not America killed her truth tellers, e.g., JFK, RFK, MLK, MX, et al.?

But let's get to the whiteness of whiteness! What do I mean? I mean these people are so absorbed in their mythology of whiteness they don't have a clue how damaging their whiteness is to themselves and others, therefore they are qualified for admission to the mental institution. They condemn any and everything Black people express in our attempt to communicate with them our feelings of humanity. We say Black Lives Matter and they know Black lives don't matter to them for they treat their dogs better than they treat us, so BLM means nothing to them thus they ridicule it and wish we would dispense the idea that our lives matter, for all lives matter in their sick minds while the news shows them nightly how little Black lives matter when pigs kill our men in front of our women and children, and often kill our children and women. And then they are bewildered why we cry Black Lives Matter. Of course, Baldwin said they live in an airless room and furthermore the idea of white supremacy has led them to rationalizations so fantastic it approaches the pathological!

They kill us at the drop of a hat, and then when we kill them they are utterly astounded that we would have the nerve to harm precious white flesh, and yet they will flip the subject to why we kill each other as if they haven't taught us to hate each other in the same manner they hate us. Every institution in American society suggests we must hate ourselves and love them. Every image of a woman is that of a white woman or a almost white Black woman. One need only look at the Rap videos to see how often a Black skinned woman is projected as the object of beauty, even though they know and we know the Black woman's body is the true standard of beauty since the beginning of time.

So our women are brainwashed to hate their black skin from Africa to Jamaica--bleaching cream is imported into Africa by the tons so women can emulate the European standard of beauty, and the same is true in India and China. Yes, White lunacy is global and the addiction to white lunacy is global. As is taught in drug and alcohol recovery, addiction is cunning and vile. One can have a relapse at the drop of a hat, the slip of a tongue can reveal the residue of white lunacy even while the addict claims recovery.

The solution to recovery from the addiction to the whiteness of whiteness or white lunacy is long term recovery to engender neuroplasticity that will allow the brain cells to change due to a new environment.

The more we try to make them part of the human family, the more they reveal themselves as part of the animal family of beasts and predators of the worse jungle variety. They want us to stop killing each other but who taught us to kill? They did and as we speak they are killing around the world for nothing. They cannot tell us why they are still killing in Iraq, Afghanistan, Syria, Yemen, Somalia, etc.

For that matter, can they tell us why they kill a human being for selling single cigarettes, CDs, DVDs,
a defective tail light, signal light, for going to the store for a soda, for being mentally ill? Why would you kill the mentally ill? It is because you are addicted to murder under the color of law. We cannot have a trillion dollar military budget to kill around the world, including a president who checks off a murder list weekly, then expect no blow back? What did James Baldwin tell you, "The murder of my child will not make your child safe!"
--Marvin X, How to Recover from the Addiction to White Supremacy, Black Bird Press, Berkeley CA.
continued www.blackbirdpressnews.blogspot.com