As Mumble and Emo Rap are being touted as the sound of a new hip-hop generation, the same generation struggles to rise from the record industry imposed monolithic pigeon hole of banal music.

Sitting in the control room at Area Twenty-Two, listening to the post 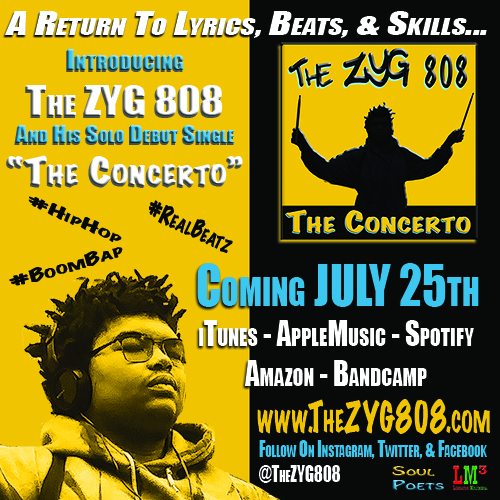 mastering session playback of the various mixes of "The Concerto", The ZYG 808 realizes that he is entering the game with a very distinctive sound and style, that especially stands out from many of his contemporaries. "Everybody's trying to sound like Drake and The Migos. Meanwhile, Drake and The Migos are trying to find a new direction for their sound."

The ZYG 808 got his first notion of this as a part of the song "Flippin'" which innovatively introduced native drumming and singing into the music, which was met with a mix of praise and hesitation. The hesitation because the uniqueness made it difficult to mix into a lot of the current work. The constraints on hip-hop music and production are so deep, simply using a snare that is not on everybody else's record can knock you out of some rotations.

"Boom Bap is still the foundation of hip-hop," explains The ZYG 808, "a lot of what's out is based in it or a reaction to it, but it's all about the boom bap. I'm a boom bap artist which makes me more of the underground."

On the other hand, Hip-hop began as an underground form and largely survives because of it's continued existence in the underground, with the industry simply being the commercial tip of the iceberg. "The Concerto" will be released on streaming and download services worldwide on July 25th.