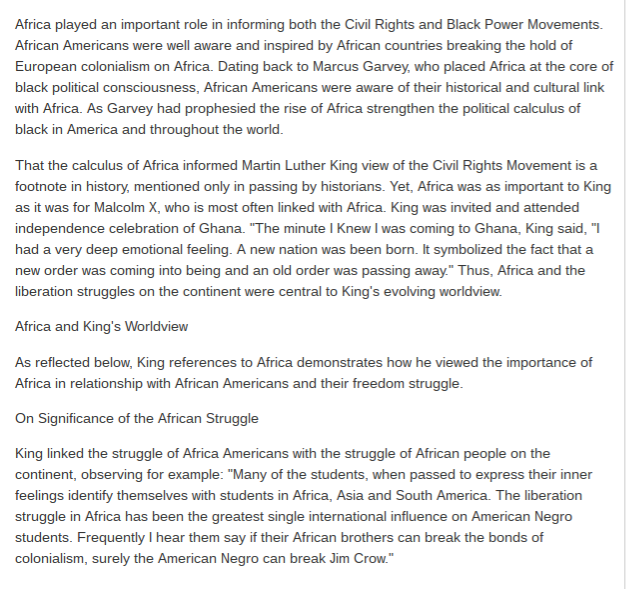 By Jitahadi Imara | While most of the writings on Martin Luther King, Jr. focus on the civil rights movement, little effort has been made to place his speeches and worldview in the context the Freedom and struggles in Africa and other Third World countries. King was informed and inspired by the liberation struggles in Africa and other Third World countries. What has emerged from the voluminous materials and books written about Martin Luther King, Jr. is a single, truncated dimension of King and his worldview. For the most part, the legacy and true meaning of King has been highjacked by historians and writers and striped of its subversive and anti-establishment content.

Africa played an important role in informing both the Civil Rights and Black Power Movements. African Americans were well aware and inspired by African countries breaking the hold of European colonialism on Africa. Dating back to Marcus Garvey, who placed Africa at the core of black political consciousness, African Americans were aware of their historical and cultural link with Africa. As Garvey had prophesied the rise of Africa strengthen the political calculus of black in America and throughout the world.

That the calculus of Africa informed Martin Luther King view of the Civil Rights Movement is a footnote in history, mentioned only in passing by historians. Yet, Africa was as important to King as it was for Malcolm X, who is most often linked with Africa. King was invited and attended independence celebration of Ghana. "The minute I Knew I was coming to Ghana, King said, "I had a very deep emotional feeling. A new nation was been born. It symbolized the fact that a new order was coming into being and an old order was passing away." Thus, Africa and the liberation struggles on the continent were central to King's evolving worldview.

As reflected below, King references to Africa demonstrates how he viewed the importance of Africa in relationship with African Americans and their freedom struggle.

On Significance of the African Struggle

King linked the struggle of Africa Americans with the struggle of African people on the continent, observing for example: "Many of the students, when passed to express their inner feelings identify themselves with students in Africa, Asia and South America. The liberation struggle in Africa has been the greatest single international influence on American Negro students. Frequently I hear them say if their African brothers can break the bonds of colonialism, surely the American Negro can break Jim Crow."

On Role of the African American Freedom Struggle in History

King placed the struggle of African Americans in the larger context of the rising tide of history, asserting: "Oppressed people cannot remain oppressed forever. The urge for freedom will eventually come. This is what happened to the American Negro. Something within has reminded him of his birthright of freedom; something without has reminded him that he can gain it. Consciously and unconsciously, he has been swept in by what the Germans call the Zeitgeist, and with his black brothers of Africa, and his brown, and yellow brothers of Asia, South America and the Caribbean he is moving with a comic sense of urgency toward the promise land of racial justice."

On How the Liberation Struggle in African emboldened African Americans

King argued that the liberation struggles in Africa gave African Americans a greater sense of human worth, awareness and assertiveness: "A factor which accounted for the new sense of dignity on the part of the Negro has been the awareness that his struggle for freedom in a part of the worldwide struggle. He watched developments in Asia and Africa with rapt attention. On these vast prodigious continents dwell two-thirds of the world's people."

King observed that the struggle for human dignity was a motivating force for black people in Africa and the United States: "Thirty years ago there were only three independent countries in the whole Africa-Liberia, Ethiopia and South Africa... These rapid changes have naturally influence the thinking of the American Negro. He knows that his struggle for human dignity is not an isolated event. It is a drama being played on the stage of the world with spectator and supporters from every continent."

The Lesson of Ghana's Independence

King observed the independence of Ghana provided an important lesson for African Americans and the Civil Rights Movement: "Ghana has something to say to us. It says to us first that the oppressor never voluntarily gives freedom to the oppressed. You have work for it. Freedom is never given to anybody. Privileged classes never give up their privileges without strong resistance."

More information can be obtained on Kwanzaa by going to http://www.kwanzaaguide.com.