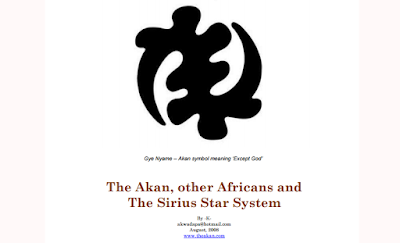 ANNOUNCEMENT
The Akan Book has now been completed. As of August 25, 2011, exactly 3 years since the book was first published and made available in its final format, I have now edited the book to remove the final bits of typos and errors. I have also added an index. So after 3 years and 111 pages (if the index is included) I can now say that the Akan book has reached its final form.
For those who printed the book before its present edited form, all you may have to do is to print the index since the page numbers remain unchanged.
It is possible that the Akan project has come to its end as a result of the completion of the book. I do not yet know this. Often it is through impulses from my Inner Being that I write articles so only time will tell whether any further articles will be published or not. It is however possible that there will be more articles in future.
The Akan Book and Website have now been read by many people around the globe. I am thankful to all who have sent emails and comments about this work.
I would also like to point out that it has come to my attention that there are those who are selling the Akan Book online for various amounts (some as much as $1 and others as much as $12 or even more). Let me point out that I have NOT given anyone any authorization to sell this book. All those doing so are doing it of their own accord.
There are also those who post parts of the book online without acknowledging the origin of the material. I want such people to know that I am aware of some of these actions. To date, I have only given one individual permission to translate aspects of  The Akan Book and Website into a foreign language. Anyone else who wishes to do this in the proper way must first seek permission. There will always be those who try to taint and twist materials released by others.
The Akan Book and Website project is dedicated to all spiritually oriented individuals who are interested in this kind of information. It is my hope that this modest effort has helped in some way to engage if not expand aspects of your outlook. If this happens for even one person then the project has been successful. Thank you.
-K-,
August, 2011

The book/paper is entitled: The Akan, other Africans and the Sirius Star System.   http://www.theakan.com/THE_AKAN_edited_expanded.pdf
The paper is in .pdf form so you can download it and read it at your leisure.
There are other articles on the website that may be of interest: www.theakan.com
Articles of interest: http://www.theakan.com/The_Akan_Website_Articles.html
You may also be interested in reading an article written by Philip Ochieng (that was initially published on allafrica.com) that draws parallels between the Maasai, the Canaanites, the Inca, the Dogon, the Wolof, the Bambara (Mande) and the Akan. In my view, what all these groups have in common, is their connection to Sirius.
Interestingly, Ochieng says that the Maasai are "people of the Maa speech". i.e. Maa-saa-i. Here , you can see a link between the name 'Maasai', the root 'saa', and the Akan word 'kasa'. 'Saa' is a root word that is related to Sirian-Reptilian language. In the Mande languages, the word for snake is 'Saa' (Mandinka, Bambara etc). Ochieng's article got close to some truths. Funnily enough, it is also the name used by space beings to refer to the reptilians. (ARI-AN-SAA, or 'Orion Saa'). So you see where 'Orion', and 'Aryan' come from?
The key here is the link to the Sirian-Reptilian extraterrestrial personality that has been called EN-KI or EA by the Sumerian/Babylonians. Interesting fact is that the Maasai call their creator-god Enkai!
There is also a link between the Akan and those who were called Canaanites (who were driven out of their land by the normadic Jewish people, descendants of the Sirian-Reptilian Annunaki). In the Akan paper/book I present a hypothetical but credible scenario showing how the ancestors of the Akan conceivably migrated from the middle east region, through Egypt, through Garamante/Libya (the Garamantian hypothesis is covered in the book, which I show is 'Koromante', not 'Garamante' as Herodotus claimed), through Mande lands and finally to the coast, to settle in Cote d'Ivoire, Ghana and Togo.
Here is Ochieng's article, it's quite a good read if you've not already seen it in the past: http://www.redicecreations.com/article.php?id=1152
As you may imagine, this ET subject is not a topic folks like to talk about very often, if at all, but well, some things are what they are, in my opinion.
The existence of ETs should not distract us from our efforts towards Liberation and Self-determination, certainly not. It is just an interesting aspect of our history and in the affairs of this planet (especially the lies and cover-ups regarding this very subject), and it puts things into perspective. That's it! That's my take on the matter. I ain't giving my power to no EN-KI or whomever!
This, and much more is covered in the paper.
Medase!
KwameD (Nana Kwame Danquah) 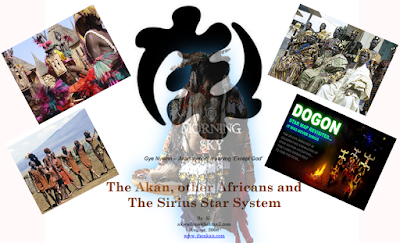 NB Commentary:
After reading... "The Akan, and Other Africans and the sirius Star System" which I have already posted in my blog,
This entire planet is a stomping ground for nefarious elements who are fighting each other. They do it thru the leaders by implanting them and having them conduct their affairs and wars.
Men like Steven Greer, Robert Temple, Lloyd Pye, Riley Martin, Dr. Delbert Blaire, and a host of others who talk about the Alien connection all the way back to the origins of humanity are ridicule and/or ignored and will continue to be ignored as long as those nefarious factions are at each other's neck.
We live on a Prison planet and even if we get rid of the current menagerie of slew footed, buck-eyed, split tongued politicians, the hidden factions will just raise up and subsequently, corrupt the next batch of candidates.
The Battle for Los Angeles,  is full spectrum battle for dominion of this planet. It is happening in the space above us thru the secret space wars. The hidden factions are derived from origins that have been battling for dominion over Terra for thousands, if not millions of years.
I suggest you do all you can to prepare yourself and determine to return to Source cause this hell hole is moving full steam ahead. No holds barred. In a hundred years everyone will be a cyborg, the planet will be over taken by AI, and the illusion of inclusion in the political landscape will be an ancient memory; that is if they don't blow it up first.
And that's what I have to say about that!
Peace and Blessings, Nana Baakan

More Reading:
http://www.bibliotecapleyades.net/vida_alien/warinheaven/warheaven-III.htm
http://www.bibliotecapleyades.net/archivos_pdf/war-in-heaven.pdf
Sirius Mystery -
Scientific Evidence Of Alien Contact 5,000 Years Ago -
Book Review
http://www.messagetoeagle.com/siruiusmystery.php#.WBPKrzXQdp
http://www.bibliotecapleyades.net/universo/esp_sirio07.htm
Guided by Aliens: Ancient Tribe Shames NASA by Revealing Unknown Star System
http://humansarefree.com/2015/11/guided-by-aliens-ancient-tribe-shames.html
The living Descendants of the Ancient Egyptians/Le
https://forum.davidicke.com/showthread.php?t=288602&page=2
Maasais, Canaanites And the Inca Connection
https://redice.tv/news/maasais-canaanites-and-the-inca-connection
China, US Are Officially Worried About A Space War
http://thelibertarianrepublic.com/china-us-are-officially-worried-about-a-space-war/
A Summary of "Terra Papers" - The Hidden History of Planet Earth
Star Warriors - The Hopis and The Greys
ALIEN INTERVIEW
http://exopoliticshongkong.com/uploads/Alien_Interview.pdf
Based on Personal Notes and interview Transcriptions Provided by:
Matilda O’Donnell MacElroy
Editing and Supplemental Footnotes by:Lawrence R. Spencer (Author of “The Oz Factors”)
Star Warrior Papers
https://cierratuatha.wordpress.com/2011/04/03/star-warrior-papers/
Akan and Ewe histories of Ancient Migration
By John Amponsah
I have been aware of Nana Banchie Darkwa's book "The Africans who wrote the Bible", as well as other books connecting Akan people not only to the Ancient Kingdoms of Ghana, Mali and Songhai but also going as far back as Ancient Egypt. Now I have recently come across a youtube video that asserts that Ewe people migrated not only from the Ancient middle East but even further afield, from Asia! (check out -- https://www.youtube.com/watch?v=dUDrLCB0wQk). I found this to be quite interesting, especially because it was told by an African rather than not. It is not the first time I am hearing about Ewe people being linked with the Middle East (what I knew of before was a link with the Semitic peoples of the Middle East such as the 'Israelites').
Migration stories and their details are not only limited to the Akan and the Ewe but also with other groups in Ghana such as the Ga and others. Africans such as Cheik Anta Diop and Theophile Obenga have previously written about ancient connections between pre-dynastic Egypt and current African cultures.
In New York City (and elsewhere in the world), the Ausar Auset society is an esoteric group that practises a mixture of ancient (pre-dynastic) Egyptian religion as well as native African traditional practises. Their leader, Ra Un Nefer Amen (born Rogelio Alcides Straughn) appears to be very interested in forming links between Ausar Auset and West African cultures like the Akan and the Yoruba. He is apparently intimately connected with (Asante-Akyem) Agogo.
In the modern world we live in where information is in abundance, it seems to be more and more the case that "there are no more secrets". Although there is so much information available now, that which was previously only accessible to a few is now potentially accessible to anyone interested. The Internet has revolutionized information exchange, yet in spite of this it is easy to get overwhelmed with an unwanted barrage of advertisements and sometimes worse. Yet every so often, one comes across interesting bits of information, which is how I classify the above youtube video.
http://www.ghanaweb.com/GhanaHomePage/NewsArchive/Akan-and-Ewe-histories-of-Ancient-Migration-181568
Dogon people
From Wikipedia, the free encyclopedia
For the ethnic group of the Kingdom of Dagbon in the north of Ghana, see Dagomba people.
The Dogon are an ethnic group living in the central plateau region of the country of Mali, in Western Africa, south of the Niger bend, near the city of Bandiagara, in the Mopti region. The population numbers between 400,000 and 800,000.[1]
The Dogon are best known for their religious traditions, their mask dances, wooden sculpture and their architecture. The past century has seen significant changes in the social organization, material culture and beliefs of the Dogon, partly because Dogon country is one of Mali's major tourist attractions.
https://en.wikipedia.org/wiki/Dogon_people#Dogon_and_Sirius
Tags: africans, akan, annunaki, anu, bambara, coast, danquah, dogon, enki, ghana
★
★
★
★
★
Votes: 0
E-mail me when people leave their comments –
Follow