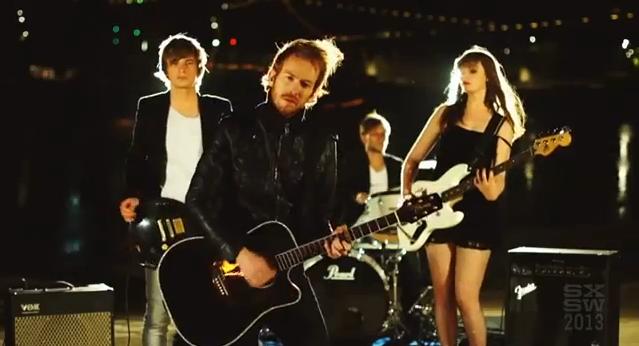 There’s something about the rise and fall in mellow, medium tone songs that work me inside. Maybe there’s more to me than I realize from my usual description of “Optimistic”. Variety is always and will always be my favorite.

I’m digging the guitar strumming in this song with the thump of the drum at certain intervals and how it has me wondering what’s “wrong?” He sounds wayward and forlorn in his presentation. I’m anticipating in the beginning what the “new way home” could mean as he’s driving around town in a black European car through underpasses, bridges, and streets in Europe somewhere; even catching a couple making-out on a bench, which I soon figure out to be him and a girl. She appears again in different scenes, like for instance in the back seat of the car with him and then I start to piece it all together that like many couples were experiencing issues in their relationship. He’s remembering or recanting the good times and how it all went wrong presumably. At the end he is found in the waking hours of the morning with his band discovering him asleep. Maybe just a bad dream he can eventually move on past.

There are glimpses of the entire band rocking out. The lead vocalist with another male and female on electric guitars with a drummer in the back. To all my ladies out here it’s fly when one of us can hang tough in a group of guys looking ultra-feminine and bad ass sexy with an electric guitar. The line “You can help [call], to find, a new waaay home” is staccato in its delivery and repeated throughout the entire song. Again another accent which is hard to distinguish exactly what the words are. But just like “Let’s Buy Happiness” the overall combination lingers and repeats itself in your memory, which is the recipe for great music. It has to stick and resonate over and over again. LYS is a French rock band from Rennes (Brittany), France discovered by Steve Hewitt, drummer and songwriter from the multi-million selling group PLACEBO.

Lithuanian capital-based ambient/drone project. The music is described to “get into depths of a strange static-movement o f the sound, earlier used to be more IDM/electronic/experimental orientated. Now it spreads through different horizons, involving listeners to sink (or penetrate) through ambientic slumber atmosphere.” I can definitely agree with “ambientic” because when the music mentally feels like your swimming in air of colors that’s what it “looks” like. Just think about the visual screen saver on your computer. Doesn’t it look like your floating or drifting through a sound wave whirl-pool? It’s awesome. Link back here