A Look at American Racism and Hypocrisy”, is a Timely Discussion about the Culture of Racism in America 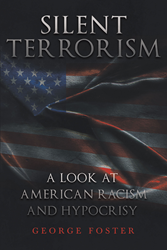 Recent release “Silent Terrorism: A Look at American Racism and Hypocrisy” from Page Publishing author George Foster is a stimulating book about the alarming racism present in America that affects African Americans and immigrants coming to and those residing in the “greatest country in the world.”

George Foster, an African-American citizen who has experienced racism firsthand, has completed his new book “Silent Terrorism: A Look at American Racism and Hypocrisy”: an elaborate work about the devaluing of American ideals due to racism, the miseducation regarding the nation’s history, and the flaws of the justice system.

Author Foster points out the conflicting actions of Americans in present times: “We don’t trust the government. We don’t trust the legal system. We don’t trust the media. And we don’t trust one another. Donald Trump has been elected to the most powerful office in the free world because he repeatedly espoused these ideas before an angry American public, while a group made up primarily of minorities, espousing the same lack of trust in the legal system, police and government are labeled terrorist for exercising the constitutional right to march and protest police brutality and their treatment by the justice system. What is the difference? Why is it that the American public is so willing to accept Donald Trump bashing the American government, the legal system, and the media but attacks a group supporting African Americans wanting better treatment from their government? Why attack, vilify, and label a group of Americans terrorist for peacefully marching and making the same statement that Donald Trump repeatedly made while campaigning for President of the United States?”

Published by New York City-based Page Publishing, George Foster’s informative book sees that the lack of ideal role models is a major problem in society, because children without good examples to look up to, who aren’t taught to Love themselves or given an appreciation of their heritage, who are uneducated and are repeatedly shown that both society and their government place no value on their lives, will grow up outside of society norms, find it harder to break the cycle of poverty, crime and violence, adding more problems in the country.

Readers who wish to experience this enlightening work can purchase“Silent Terrorism: A Look at American Racism” at bookstores everywhere, or online at the Apple iTunes store, Amazon, Google Play, Kobo or Barnes and Noble.

For additional information or media inquiries, contact Page Publishing at 866-315-2708.

Page Publishing is a traditional New York based full-service publishing house that handles all of the intricacies involved in publishing its authors’ books, including distribution in the world’s largest retail outlets and royalty generation. Page Publishing knows that authors need to be free to create - not bogged down with complicated business issues like eBook conversion, establishing wholesale accounts, insurance, shipping, taxes and the like. Its roster of authors can leave behind these tedious, complex and time consuming issues, and focus on their passion: writing and creating. Learn more at http://www.pagepublishing.com.