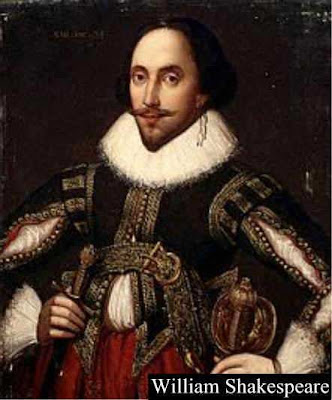 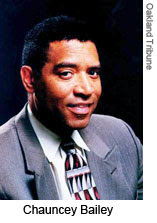 On one level, the Chauncey Bailey assassination can be best understood by recalling the drama of classic Shakespeare, Hamlet, Macbeth, King Lear. Many of his plays dealt with succession rights/rites, often involving themes of jealousy, envy, greed and power. Of course these are general themes of humanity, but the man known as Shakespeare wrote about these matters better than others before and after him. In Othello we find a man duped by his friend and advisor, Iago, so confused by the tricknology of Iago that the great Moorish warrior killed his beloved wife Desdemona, then took his own life.
We can see the parallel in the Chauncey murder. The king dies and there is the fight over which of his twenty sons (there are twenty daughters as well, but this is a patriarchy) shall succeed him. One of the several mothers is determined she and her children should control the empire, but another mother feels the same and moves to secure the throne for her son (s). The first son dies mysteriously in a car-jacking. Her next in line takes over the throne.
Meanwhile, the man who was a dear friend of the king receives information about the succession battle, a piece of dirt that was, for the most part, already public information. But the messenger was sent by his mother-in-law, knowing the message would incite anger in the successor to the throne who was not of her bloodline.
When the message is delivered it is overheard by a former co-wife who immediately relays it to her friend, the wife or widow, whose son has seized control. Apparently she tells her son, the new king, who goes into a rage at his father's friend, not realizing he has been set up by the co-wife who sent the message by her son-in-law.
Also, the new king's advisor, call him Iago, has deep resentment for the old king's friend, for the friend knows Iago is a devil and has been seeking information to expose him. Iago figures he can dispose of his nemesis by encouraging the boy-king to murder his father's dear friend.
Knowing the boy-king is a hot head, Iago (OPD), suggests the plan and it is carried out. He convinces the boy-king he will go free after his dastardly deed, for Iago claims special powers under the color of law. The boy-king is convinced he can commit innumerable crimes because he is under the protection of Iago. He truly believes Iago can get him out of any situation. Yet Iago has his own motivation for inspiring murder, to stop the old king's friend from a possible exposure of his dark deeds that, now involve the boy-king: money laundering, fencing, drug dealing, homicide, prostitution, etc. The boy-king is in too deep, even after considering that his father had a deep relationship with the man he must now dispose.
The co-wife, now widow, had no idea things would get out of hand but she felt entitled to the empire and was not about to settle for her sister-wife inheriting everything.
After the assassination of the old king's friend, Iago takes control of the crime scene, gathers selected evidence and a confession. He refuses to question eye-witnesses at the crime scene for they are irrelevant, he has accomplished his mission, or shall we say his patsy has.
The boy-king soon realizes he has been set up from two sides, the co-wife and Iago, for different reasons. He realizes his deed has caused the death of his father's friend and the possible death of himself by hanging.
Iago is in the corner laughing, yet worried his mentee may one day disclose all the dirty deeds he was asked to perform for Iago, hence Iago is not home free yet. Now he must configure a way to silence the boy-king. Stay tuned.
--Marvin X, Prime Minister of Poetry,
First Poet's Church of the Latter Day Egyptian Revisionists
http://www.firstpoetschurch.blogspot.com/

Marvin X is the author of thirty books, eight in the last year. He is one of the founders of the Black Arts Movement and cosidered the father of Muslim American literature. Bob Holman calls him the USA's Rumi. He writes in the Oakland Post newspaper and elsewhere, especially on the Internet. Search Google for his many blogs.
★
★
★
★
★
Votes: 0
E-mail me when people leave their comments –
Follow