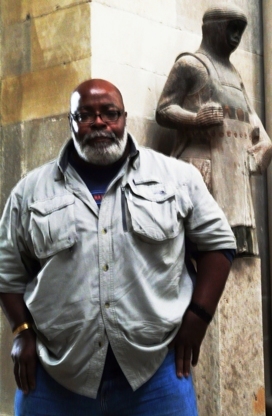 I want to tell you about my day in the museum.  You know that my daughter lives just outside Paris and so I come here to France to spend as much time as possible with her.  Today, after taking her to school, I went to the Louvre to test out my new camera.  Yes, I brought a new camera a couple of weeks ago and I wanted to take it to a museum to give it a try.  I don't know if I am satisfied with the camera but I had one of productive and rewarding days I've ever spent in a museum.

I guess that you could call the Louvre the national museum of France.  It is a symbol of the fact that France was once one of the powerful on earth and one of the world's major colonial power.  France lorded over much of the earth and when we are talking about the museum collections it is difficult not to refer to it as loot!

Based on the quantity and quality of the artifacts there, the Louvre is arguably the greatest museum in the world and certainly one of the largest.  They have a lot of stuff!  It is also a very building.  It is used to be a palace and the layout of the building can seem very chaotic.  I get lost in it every time I go

I worked hard today.  I spent about six hours in the museum and took about two-hundred photos.  All of them are significant and some are of very good quality.  A few of them are outstanding.  But three of them still have me trembling.  One was of a head of Gudea--the greatest ruler of the ancient civilization of Sumer.  The head is more than four-thousand years old and is by far the most Africoid such image I have seen.  Another, and I never dreamed that it was in the Louvre, was a small black statue of Kheredouankh--the mother of Imhotep.  She is painted jet black with incredibly nappy hair!  And the third was a cluster of brilliantly colored cameos from early seventeenth century France.  And in the very center was the most Africoid--looking woman you have ever seen.  I believe that it is the image identified as the mother of Alessandro d'Medici--a duke of Florence during the 16th century.

That was my day in the Louvre in Paris.

Oh yes, I forgot to tell you how my visit to the Louvre started.

The museum collections in the Louvre are divided by three entrances.  They are the Sully, the Denon and the Richelieu.  The Egyptian collections are visited through the Sully entrance.  But I have visited the Egyptian section so many times that today I decided to go in the Richelieu entrance.  Just beyond the entrance was a small exhibit.  It said something in French about St. Maurice but the images didn't look African and so I decided to not even bother.  But something seemed to to call to me and inside I went.  What did I have to lose but a little bit of time?  And, sure enough, the first piece in the exhibit was oldest and most Africoid image of all of the African patron-saint of Germany--St. Maurice himself--dressed as a medieval knight.  To my knowledge, it is the first time that the piece has been taken out of Germany.  I saw it for the first time in Eastern Germany about three years ago.  And there it was this morning, staring me right
in the face.

Yes, it was that kind of day in the museum.

I love museums.  I am passionate about them.  In fact, some times I think that I was a museum artifact in another life.  And in less than two weeks I will visit the great museums of Berlin, Germany and Madrid and Seville in Spain.  And in August 2014, just a few months from now, I am going to lead a group tour through the African collections of several of the most outstanding museums of Europe, including the Egyptian Museum in Berlin--which houses the famous wooden head of Queen Tiye and that oh so controversial bust of Nefertiti; the Egyptian collections in Leiden in the Netherlands and a series of powerful images of African from the European renaissance in the Dutch world on display in the national museum in Amsterdam; followed by a visit to the Black Madonna of Belgium and a tour greatest collection of African artifacts in Brussels, and then we visit the Louvre, where I will show you the pieces that I visited today.  All of that and more   And
on the journey we dine in African restaurants, hear lectures by Runoko Rashidi, sail on some of Europe's most famous rivers, learn a lot, probably do some shopping, and visit in Paris the tomb of Alexander Dumas, pere--that great African writer that told us "One for all and all for one!"

So if you love museums like I do.  If it sounds like a trip that you might want to take I encourage you to contact Ms. Betty Ray.  For years I have wanted to work with a gifted African travel agent and Mr. Ray fits the bill.  So, get in touch with her.  Ask her about the African heritage that allows us to see the great African artifacts in the great museums of Europe, with Runoko Rashidi.  The dates are August 21-30, 2014.  And the trip is affordable with good hotels and two meals per day.  So get with it.  Contact Betty and come on with me!

The trip originates in New York and is only $3395.00 per person.  All major credit cards accepted. Payments by check made payable to Vacation Klub, LLC. Credit card authorization form will be forwarded to the individual for  signature; which should be mailed back along with copies of the credit  card back & front & a copy of driver’s license or passport. 3% surcharge will be added to credit card payments.

Hope to see you in the museum!