First, as 1 artist to another, I appreciate you &all the hard work that went into creating this. HOWEVER, what I strongly disagree with, is making the POTUS into a celebrity.Creating this mythos around a man whose job is to lead the country FORWARD. He's not a HOLLYWOOD STAR/ACTOR. I think it's disrespectful.Will he go down in history as a SUPERSTAR or someone who really moved the country forward? Allegiance to a man? American Idol? Exalt & Elevate integrity, peace, love & truth. Poetic License? http://youtu.be/c_d9mntKvGM

I wish I could find the right words to express how uncomfortable it makes me feel. It's like some kind of cult or something. "The Cult of Obama" Obama-Mania. People are all frenzied, teary eyed, gushing like they are having orgasms over him. That last campaign with the Obama girl was really over the top. What is that? Why do people need to idolize him? How is that cool for a thinking, educated, civilized nation of people? What if they did that to Bush, whom they clearly did not like. What if the Tea Party wrote songs about John Boehner?

Okay, political parody, satire, or even cartoons, but this romanticizing of the President is a bit much for me. They are so memorized they care not to look at the true picture, the real deal and that means they are dangerous. That Obama Kool Aid is really powerful.
Is this really poetic license or is it opportunism? The number of YouTube videos that are out with people singing to him, and the number of hits these videos are getting begs to question the real motive behind this type of "free advertisement".


I don't  particularly agree with all that is presented in this movie, but the song does kind of say it all for me.

It just don't sit right with me, and this is a very subjective assessment on my part. But idolizing another human being is a sure fired way to trouble. Look at the many other cult personalities that have lead people into serious trouble. Again this is subjective.

"A personality cult appears whenever an individual uses mass media propaganda to create idealized, quasi-heroic public personae arising from unquestioned flattery and praise.  Personality cults aim to make the leader and the state synonymous, so that it is nearly impossible to make a distinction between them."   Read more here GeeeeeeZ! OBAMA: Cult of Personality

From Wikipedia, the free encyclopedia
This article is about the political phenomenon.

For the song by Living Colour, see Cult of Personality (song).
http://en.wikipedia.org/wiki/Cult_of_personality
A 1950s Chinese propaganda poster showing a happy family of five enjoying life under the image of Mao Zedong. The caption above the picture reads "The happy life Chairman Mao gives us".
A cult of personality arises when an individual uses mass media, propaganda, or other methods, to create an idealized, heroic, and, at times god-like public image, often through unquestioning flattery and praise. Sociologist Max Weber developed a tripartite classification of authority; the cult of personality holds parallels with what Weber defined as "charismatic authority". A cult of personality is similar to hero worship, except that it is established by mass media and propaganda.

The term Cult of personality or Personality Cult first appeared in Nikita Khrushchev's Secret Speech in 1956[1]. Cult of the individual is a more accurate translation[2].

Throughout history, monarchs and heads of state were almost always held in enormous reverence. Through the principle of the divine right of kings, for example, rulers were said to hold office by the will of God. Imperial China (see Mandate of Heaven), ancient Egypt, Japan, the Inca, the Aztecs, Tibet, Thailand, and the Roman Empire (see imperial cult) are especially noted for redefining monarchs as god-kings. The spread of democratic and secular ideas in Europe and North America in the 18th and 19th centuries made it increasingly difficult for monarchs to preserve this aura. However, the subsequent development of photography, sound recording, film, and mass production, as well as public education and techniques used in commercial advertising, enabled political leaders to project a positive image like never before. It was from these circumstances in the 20th century that the best-known personality cults arose. Often these cults are a form of political religion.

See also: Secular religion
Personality cults were first described in relation to totalitarian regimes that sought to alter or transform society according to radical ideas.[3]Often, a single leader became associated with this revolutionary transformation, and came to be treated as a benevolent "guide" for the nation without whom the transformation to a better future couldn't occur. This has been generally the justification for personality cults that arose in totalitarian societies of the 20th century, such as those of Adolf Hitler and Joseph Stalin.
Not all dictatorships foster personality cults, not all personality cults are dictatorships (some are nominally democratic), and some leaders may actively seek to minimize their own public adulation. For
example, during the Cambodian Khmer Rouge regime, images of dictator Pol Pot (Saloth Sar) were rarely seen in public, and his identity was under dispute abroad until after his fall from power. The same applied to numerous Eastern European Communist regimes following World War II (although not those of Enver Hoxha and Nicolae Ceaușescu, mentioned below).
http://jayreding.com/archives/2008/06/30/barack-obama-of-the-brain-slug-party/

Che Obama: the new cult of personality
"It is doubtful that anyone ever thought to wear a t-shirt with George
Bush’s image splashed across it, except to deride him. Now, wearing the
image of the president is not only popular, it has become almost
obligatory in some circles.

Obama’s image is not just appearing on t-shirts. There are Obama hats, Obama pencil cases, Obama hoodies, Obama screen savers, Obama jewellery, Obama coffee cups and Obama street murals. And Obamamania hasgone mainstream. Today in DC we can buy metro tickets sporting Obama’s image. Numerous buildings are decorated with huge banners welcoming the new president. Even the National Portrait Galley has got in on the act, snapping up Shepard Fairey’s original collage for the gallery walls long before the new president’s official portrait will be commissioned.

Such is the strength of the cult surrounding Obama’s image that vendors at the inauguration were hard pushed to find new ways to commemorate the day. Many tried, of course. On my own walk into the city I saw Ben’s Chili Bowl on U Street, a local landmark, displaying a huge red, white and blue ice sculpture of the letters OBAMA. A church on 16th Street offered hot cocoa and a chance to be photographed with a life-sized Obama cut-out. On the Mall itself everything from Obama special inauguration bandanas to Obama dollar bills (with President Lincoln’s image replaced with President Obama’s) to my own personal favourite, Obama water, was on offer." 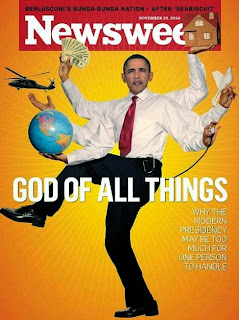 “Obama’s finest speeches do not excite. They do not inform. They don’t even really inspire. They elevate. They enmesh you in
a grander moment, as if history has stopped flowing passively by, and, just for an instant, contracted around you, made you aware of its presence, and your role in it. He is not the Word made flesh, but the triumph of word over flesh, over color, over despair.”
…Barack Obama just seems to get cooler and cooler. He’s the most popular topic on the New York Times topics page…Internet widgets allow you to see what great thing Barack Obama has done for you…on the New York subway Friday morning, one of our copy editors…heard one woman joke to another: “Obama, will
you pick me up after my noninvasive minor surgical procedure?” To which the other replied: “Obama, will you hold my hair back when I puke?”…
Many spiritually advanced people I know…identify Obama as a Lightworker, that rare kind of attuned being who has the ability to lead us not merely to new foreign policies or health care plans or whatnot, but who can actually help usher in a new way of being on the planet, of relatingand connecting and engaging with this bizarre earthly experiment. Thesekinds of people actually help us evolve. They are philosophers and peacemakers of a very high order, and they speak not just to reason or emotion, but to the soul…
John Lewis, the venerable civil rights hero and congressman, put words to this feeling recently. “In recent days, there is a sense of movement and a sense of spirit,” he said, suggesting that he might switch his superdelegate vote from Hillary Clinton to Obama. “Something is happening in America and people are prepared and ready to make that great leap.”…On Facebook, people write about dreams featuring Obama. There is only one correct reaction to the will.i.am “Yes We Can” video and that is to start chanting along… There was the woman in New Hampshire who compared him with Christ. There was Maria Shriver’s comparison of the candidate with the state of California, with the rhetorical fervor usually seen only after a preacher shouts, “You are healed!”…“Be not afraid; for behold I bring you good tidings of great joy which shall be to all the people: for there is born to you this day in
the city of Chicago a Savior, who is Barack the Democrat.” 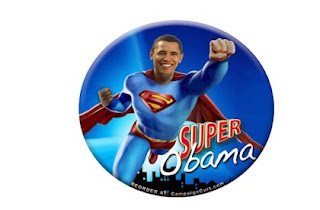 The Obama cult
"Recently I have noticed an interesting but disturbing phenomenon in New York City. On the streets, subways and buses, you can see people
still wearing Barack Obama buttons even though the election is long over. I wonder to myself whether these buttons express an inchoate political/psychological yearning. In some ways it reminds me of how people wore pictures of the fifteen year old guru Maharaj-ji, who counted former 60s radical Rennie Davis as one of his main followers.

When I spoke to a fellow radical in my department at Columbia University about my concerns, his eyes lit up and he said:

I know exactly what you mean. There’s this guy in my health club who wears an ‘Obama Knows’ t-shirt. The other day I went up to him and asked him, “Knows what?” He really couldn’t answer
me. 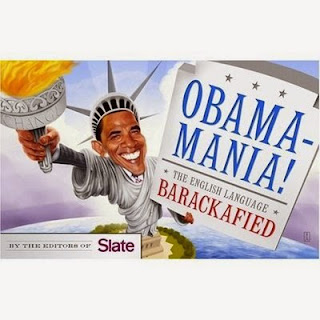 "Obama's popularity is clear evidence of a brand strategy that has succeeded beyond any strategists wildest dream and further proof that once you build a compelling saga and unleash it to the world, there is no telling how far and wide it will go. From a branding perspective, Obama may have become too hot too fast and now one of his biggest challenges might be dealing with the inevitable backlash created by the frenzied admiration from the millions of kool-aid drinking Barackolytes:" 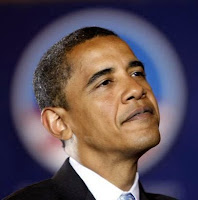 The Halos of Barack Obama
More from Dorothy:"I honestly don’t know whether to put this in religion or politics. I honestly feel the passion for Senator Obama expressed by most of his followers has equal elements of both - even if they deny it. But I suspect the moderators would move it here to politics if I put it in religion, so here it is in politics. I know this will make many people angry (primarily Obama followers), but I am not looking to debate. I just wanted to display some of the images of Obama because I find the whole media’s marketing - in this case, just
the visual elements- behind the man so fascinating. 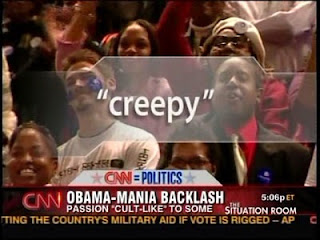