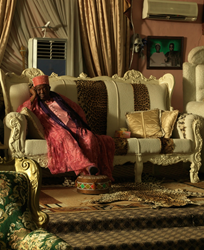 Newark Museum Takes a Rare View Inside the Palaces of Nigeria’s Monarachs
Features large-scale portraits by Nigerian photographer George Osodi. Exhibited for the first time in the U.S., these color photographs feature regional kings (and a queen) of modern-day monarchies, and will be shown along with dress and regalia from the Newark Museum’s collection.

The Newark Museum will present an exhibition of 40 large-scale portraits from a new series by acclaimed Nigerian photographer George Osodi. Royals and Regalia: Inside the Palaces of Nigeria’s Monarchs will open February 25 and run through August 9, 2015.

Exhibited for the first time in the United States, the lush color photographs feature the leaders of modern-day monarchies throu ghout the country. “The images provide audiences with a rare and intimate look inside Nigeria’s palaces and throne rooms, capturing the personalities of the rulers, the splendor of their dress, and the details of their settings,” said Christa Clarke, Ph.D., the Museum’s Senior Curator of the Arts of Global Africa, who organized the exhibition. The near life-size photographs will be shown along with select examples of prestige dress and regalia from the Museum’s internationally renowned collections.

“The idea behind this project is to travel around this diverse country and go beyond the portraits to explore the subjects’ environments – being the custodians of our cultural heritage and peace makers – exploring their architecture and fashion with the view to showcase and celebrate them and to mirror the country’s great culture through their personalities,” the artist Osodi said.

The series presents more than 20 rulers, most of whom represent regional monarchies that have existed prior to creation of the present-day nation of Nigeria in 1914. Though weakened by British colonial rule and stripped of constitutional powers in 1963, after the country gained independence, they remain an integral part of the country’s political and social landscape. In addition to the formal portraits of rulers in full regalia, Osodi has collected their biographies and notes on the history and traditions associated with each ruler.

Osodi’s work intervenes in a long tradition of photographic portraiture in Africa, a history largely shaped by foreigners at a time when kingdoms were being subjugated by colonial powers. “I want to document Africa from an African perspective,” he said. His aim is to capture the ways that the monarchs position themselves as living symbols of cultural heritage in the globalized world of the 21st century.

The monarchs are presented in their full pomp and splendor, dressed in richly embroidered robes, sumptuous brocades, and vibrant printed textiles and wearing elaborate beaded headgear, jewelry and other regalia. They are posed inside lavish interior rooms, on thrones set on palace grounds, and even behind the wheel of a luxury convertible. Osodi’s aesthetic sensitivity to his subjects in apparent in the formal compositions of the photographs, which reflect the artist’s interest in the “Golden Age” of European royal portrait painting yet capture present-day realities.

Osodi’s portraits of rulers are complemented by examples of Nigerian prestige dress and regalia from Newark’s collection interspersed throughout the exhibition, providing historical depth and sartorial context. A highlight is a ceremonial robe – made of intricately cut velvet strips and adorned with elaborate beadwork – worn by Oba Adesida II in 1959 when he was sworn in as the ruler, or Deji of Akure. The exhibition also features a lavishly embroidered gown, or riga, created for a Hausa aristocrat in the late 1920s and worn as part of investiture ceremonies. A selection of Yoruba beaded regalia includes a crown in the shape of a British barrister’s wig, a foreign symbol of power appropriated during the colonial era.

Following its presentation at Newark, Royals and Regalia will travel through the end of 2017. Select works from the series were originally presented in an exhibition curated by Ziggi Golding at Bermondsey Project, London, in 2013.

Osodi is a Lagos-based artist who worked as a photojournalist, first at the Comet newspaper from 1999 to 2001 and then for the Associated Press in Lagos in 2001-08. Osodi has covered many assignments for both local and international organizations, with his photographs published in the New York Times, Time Magazine, the Guardian, The telegraph, London Times, USA Today, the International Herald Tribune, CNN, BBC Focus on Africa Magazine, Der Spiegel and many more. His 2003-07 photo project, Oil Rich Niger Delta, drew widespread attention to the environmental destruction of the Niger Delta. Photographs from this series have been exhibited internationally and were presented to great acclaim at Documenta 12 in Kassel, Germany in 2007. Osodi’s work is in the collections of major institutions and private collections around the world including Museumslandschaft Hessen Kassel, the National Museum of Greece, Fondazione Cassa di Risparmio di Modena, the National Museum of African Art in Washington DC, and the Ford Foundation.

ABOUT THE NEWARK MUSEUM

The Newark Museum is located at 49 Washington Street in the heart of the Downtown/Arts District of Newark, New Jersey, between the Rutgers Newark Campus and NJPAC. The Newark Museum is 10 miles west of New York City and easily accessible by NJ Transit and PATH. The Museum is open all year round: Wednesdays through Sundays, from Noon – 5:00 p.m. Suggested Museum admission: Adults, $12.00; Children, Seniors and Students with valid I.D., $7.00. Newark Residents and Members are admitted free. The Museum Café is open for lunches Wednesday through Sunday. Convenient parking is available for a fee. The Newark Museum campus, including its collections, facilities, and other resources, is accessible to accommodate the broadest audience possible, including individuals utilizing wheelchairs, with physical impairments, other disabilities, or special needs. For general information, call 973-596-6550 or visit our web site, http://www.NewarkMuseum.org.