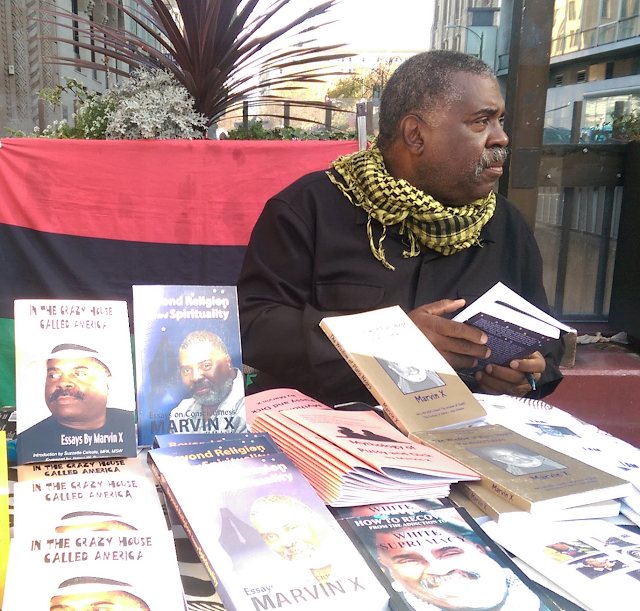 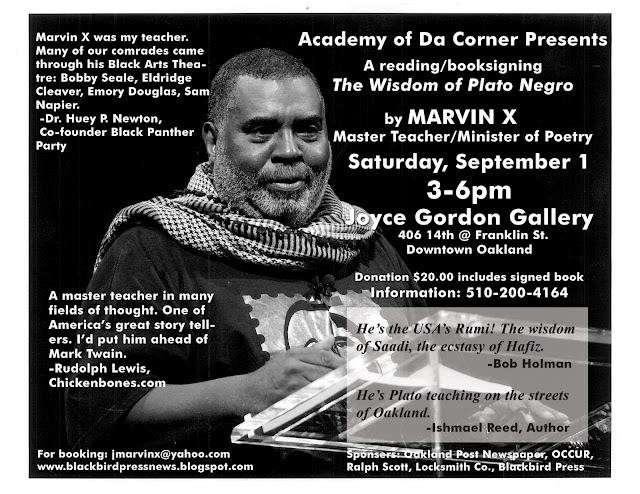 "Marvin X says some wild, wild things!"
--Attorney John Burris
"He deals in hyperbole to the max!"
--Martin G. Reynolds, former Editor, Oakland Tribune
"I support his March for Men who need multiple wives and unlimited ho's (sex workers)."
--Empress Diamond
"I will march with him!"-- Paradise Jah Love
"I will hold the banner!"--Eugene Allen
"He has my support!"--Keith X Carlisle
"Marvin, you don't need a wife! You need a maid, secretary and mistress."
--Marian M. Jackmon, Mother of Marvin X (RIP)
"Oh, Marvin, you never cease to amaze me!" Libby Schaaf, Mayor of Oakland
"Courageous and outrageous! He walked through the muck and mire of hell and came out clean as white fish and black as coal."--James W. Sweeney, Esq.
"In terms of being modernist and innovative, he's centuries ahead of anybody I know."
--Dennis Leroy Moore, Brecht Forum, New York City


Points of consideration beyond hyperbole

1. How can two people suffering the addiction to white supremacy claim they love each other and want to get married. They are toxic and thus their relationship shall be toxic, resulting in the 50-70% divorce rate in the North American African community. It's 50% in the white community because they suffer addiction to white supremacy type I. We suffer type II addiction to white supremacy, according to the esteemed Dr. Nathan Hare, who was able to maintain 57 years of marriage to his great wife Dr. Julia Hare. But even among the Black Bourgeoisie, their marriages are quite often "the golden handcuffs," i.e., maintained because of the perks that have nothing to do with love but that addiction to conspicuous consumption, as delineated by Dr. E. Franklin Frazier in his classic Black Bourgeoisie.  In short, when the deaf, dumb and blind lead each other, they both fall in the ditch together.

2. We already know gay/lesbian relationships suffer the same trauma, emotional, physical and verbal abuse as heterosexual relationships, if not worse! We shall soon know if the same stats are true for marriages. My message to all married persons is the same: transcend the chattel slavery mentality or personal property slavery. You got papers on me but you don't own me motherfucker! Get this in you head, male bitch/female bitch, trans-sexual bitch, polygamous bitch. My life and death are all for God!

4. As per multiple wives, do not bring two or more women together who do not like or love each other. This is setting the stage for a toxic hell that will be transmitted to the children. Trust me, I know this from experience. When it was clear to me my wives would never love each other, I shifted my focus to trying to make my children by different mother's love each other--I think I succeeded in this.

My wives  said they would have been great friends if it wasn't for me, ha, ha, ha, the sistahood--alas, where is the brotherhood? It doesn't exist, hence the present situation in which gays/lesbians/queers, trans-sexuals have rights men can only dream about. Think about it: they can get married and you are not organized to have the right to be with your sex worker in a mutual agreement! Or if you have multiple wives, they cannot meet until you die, when they and your children by them appear at the funeral. What kind of bullshit is this? Kiss my motherfucking ass, if you men can't get your nuts out the sands of time when everyv motherfucker in closet has come out, fuck you!

Please send your comments to Marvin X at jmarvinx@yahoo.com. More than likely, your comments will be posted on his blog www.blackbirdpressnews.blogspot.com

Marvin X is available for speaking and readings coast to coast. He recently participated in the Sun Ra Conference at the University of Chicago, May 21-22, 2015. While in Chicago he performed at African Liberation Day and recorded with Chicago poets and musicians. Youtube has the video of his participation on the panel discussion at the University of Chicago with scholars who appoint Sun Ra the father of Afro Futurism as well as a founder of the Black Arts Movement in Harlem with Ancestor Amiri Baraka. The University of California, Berkeley has released the 1971 lectures of Sun Ra when he and Marvin X taught in the Black Studies Department and Sun Ra worked at Marvin's Black Educational Theatre in the Fillmore, producing the musical version of Marvin's BAM classic Flowers for the Trashman (see Black Fire and SOS, BAM Reader).