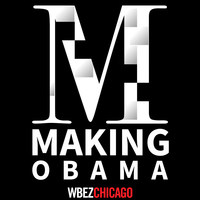 Barack Obama was once just a young man with a new job in the city of Chicago. In "Making Obama," the new documentary podcast series from WBEZ Chicago [https://interactive.wbez.org/obama/], the former President and key advisers, mentors and rivals speak openly about his political career path and how Chicago was a conduit for his ultimate success as America's first African American President.

Hosted by WBEZ's Jenn White and produced by Colin McNulty, the six-part podcast pulls back the curtain on Obama's rise to national prominence, from his early days as a South Side Chicago community organizer to his time as a rookie politician being hazed in the Illinois Statehouse, to an embarrassing run for U.S. Congress. The series culminates with an epic comeback and the start of the national political movement that catapulted him into the White House.

"A story like mine could have happened in another city, but my story could have only happened here.., " said President Obama in an excerpt from the podcast.

WBEZ sat down with the former president in a candid conversation, and interviewed those around him during the early days. In addition, the podcast draws on WBEZ Chicago's coverage of his political life and dozens of hours of original interviews about his formative years.

"The city of Chicago played an essential role in shaping Obama's approach to politics and WBEZ had a front row seat to that journey," said White. "For this series, we spoke with many of the key players who were part of those pre-White House years – some people you will recognize but others you probably won't."

In another clip from the podcast, Chicago Mayor and former White House Chief of Staff Rahm Emanuel describes why Obama thrived in Chicago politics, "He has an unbelievable, warm, capturing smile. It covers a very tough, steel spine."

WBEZ Chicago launched the "Making" podcast series in 2016 by sharing the inside story of Chicagoicon Oprah Winfrey. Now, in the second season, listeners are given a rich, behind-the-scenes look at another famous Chicagoan, Barack Obama.

"WBEZ is nationally acclaimed for its original reporting and documentary productions, and our Making series aims to share the compelling stories of people, movements, and ideas that have profoundly shaped American life," said Steve Edwards, vice president and chief content officer for WBEZ.

The first episode of the "Making Obama" podcast series debuts Feb. 8, 2018 and will be available for download or streaming on Apple Podcasts, Google Play, wbez.org/Obama and other podcast platforms. Go to wbez.org/obama for more information as well as additional background on each episode. The episodes will be released weekly, culminating March 15 with an episode about Obama stepping onto the national stage in 2004.

Download the WBEZ app, available in the App Store and Google Play.