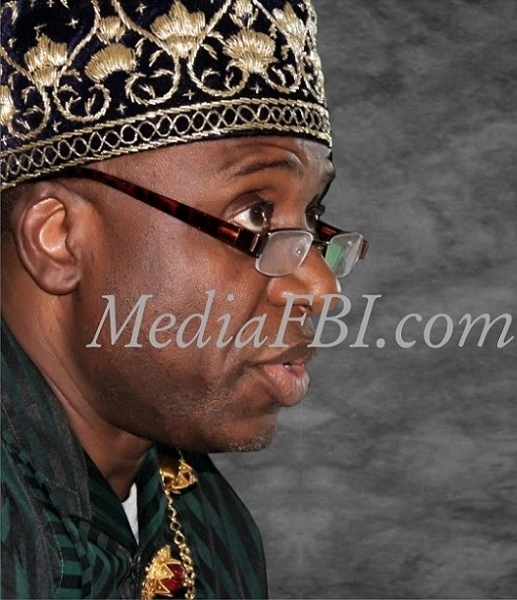 ... Amaechi didn't join APC to Oust Jonathan, but was forced out by PDP hawks and idle political Jobbers

Recall that Akawor, had during a sparse gathering of members of the PDP in Ikwerre Local Government Area, announced to his audience that the Minister of Transportation and South-South Leader of the APC, Rt. Hon. Chibuike Amaechi, would make a comeback to the People’s Democratic Party any time soon.

An excerpt from the very deceptive and widely publicized opinion reads “One day, Rt. Hon. Chibuike Amaechi, your son, will come back to his family, which is PDP. He has to come back because he was a speaker. Where he went, he went for a reason. He went to remove President Jonathan. Jonathan has gone, so he should come back to his party. I am saying it again. My brother, my friend, the bosom friend of our Governor, Nyesom Wike, Rt. Hon. Rotimi Amaechi, come back home.”

In a statement made available to media houses in Port Harcourt, Chief Eze counseled Akawo and those who share in his wildest imagination to quickly seek the service of health professionals for medical examinations to ascertain their health status and subject themselves to treatment where necessary, because according to him, only young men with sophisticated health issues, defective sensory neurons and blurred reasoning will share in such a blunt view.

“While I lack the power to stop Ambassador Akwaor from dreaming of the Super Minister and Minister of the Decade, Rt. Hon. Chibuike Rotimi Amaechi, erstwhile Governor of Rivers State and incumbent Minister of Transportation returning to the sinking Peoples Democratic Party, I wish to counsel him to try to treat himself of malaria as nothing will cause the Minister to return to a party that did everything to destroy his political feats and personality.”

The Party Chief said Chief Akawor, who earned his Ambassadorial appointment on the footing of his roles in the satanic collaboration among the Jonathans,Wike, Obua, and others, which led to forceful exit of Amaechi from the PDP, may just be  scamping alongside

others, for the return of Amaechi, in order to give credibility to the party already destroyed by Governor Wike and his inklings.

It is unfortunate and in fact pricking on the conscience for Akawor, whose inputs in the broad day robbery that tore the Rivers PDP in pieces, to say Amaechi’s motive for leaving the party was chiefly to remove President Jonathan, and having succeeded, he should return to the PDP.

For avoidance of doubt and in straightening the records, Chief Eze said Rt. Hon. Chibuike Rotimi Amaechi has nothing to do with the ouster of Dr. Goodluck Jonathan as the President of Nigeria but was forced out of the PDP by those he described as party hawks and jobbers who felt Amaechi was a threat to their undemocratic antecedents.

The famous statement "We’ll arrest Amaechi by next year - Wike" credited to Chief Nyesom Wike, then a junior Minister in the administration of Dr. Jonathan Goodluck by 2014 still suffices and speaks more on the ploy to trick the then Governor to swim in  muddy waters.

Then Supervisory Minister of Education had said that Chibuike Rotimi Amaechi will be arrested after President Goodluck Jonathan's declaration as winner of the 2015 presidential election.

"Once INEC announces the victory of President Jonathan, we will immediately shut down the Port Harcourt International Airport and all land and sea borders in Rivers State to prevent Governor Amaechi from escaping. Does he think we don't know that he is planning to run away? But he and his cohorts will not succeed.

All they can do thereafter is to lock themselves in the government house and at the appropriate time we will go there and pick them up one after the other. Believe me, governor Amaechi will surely account for all our monies that he is frittering away now".

The Deputy National Chairman of the PDP then Prince Uche Secondus, who also spoke at the event said that Governor Amaechi is a temporary occupant in government house and that PDP will not allow him to choose his successor in 2015 because Rivers State is for PDP. He has taken all our money to Lagos to develop APC.

With this type of threat by the over ambitious and deadly Wike, one may be forced to ask, "is Amaechi a stone or a tree that is been threatened to be cut but stood still without running. Amaechi has to find a way to survive this unwarranted onslaught, so he left.

Eze recalled with nostalgia how the hawks running the administration of Dr. Jonathan kicked Amaechi out of PDP.

Let me state that the obvious desperation of the PDP leadership to completely destroy Amaechi led to his departure, alongside five other PDP governors, to form the New PDP, with five of them later joining the mega opposition political party, the All Progressives Congress.

The Factors that forced Amaechi out of PDP are thus under listed:

When the PDP national leadership undemocratically decided to suspend Governor Amaechi from the party without any sound reason on May 27, 2013 and was to follow it up with expulsion, Amaechi the victim resorted to the courts, once again, to stop them from taking any further step on his case until he decided to join APC. The suspension of Amaechi from the party was agreed during an unscheduled and unusually early morning meeting of the National Working Committee (NWC) of the party at the residence of the then National Chairman, Alhaji Bamanga Tukur. The meeting commenced at 8:00 am and came two days ahead of the regular meeting of the NWC, which normally holds on Wednesdays. It was also three days after Amaechi beat the odds with his re-election as chairman of the Nigeria Governors’ Forum. He had been allegedly opposed by the PDP Governors’ Forum (PDP-GF) ahead of the election.

It is said that during the intervening days, many interventions were made to save the crisis and resolve the matter. Important national leaders including Retired General Yakubu Gowon tried to stop the departure of Amaechi knowing it was the only way to stop the exodus. But the more such efforts were made, the harder those who did not want Amaechi in the party worked to push him out.

For the education of Ambassador Akwaor and his misguided fellows, let me call on Amaechi to explain by himself why he joined APC.

Explaining why he joined APC, Governor Amaechi said: “Unfortunately, recent events within the PDP have given me reason to reconsider our collective interest as people of the South-South and, indeed as Rivers people. At various times, as the one whom you gave your mandate, I had cause to complain about the marginalization of our state and our people, despite our huge contribution to the national coffers and our unflinching commitment and support for the ruling PDP. While the political and economic importance of Rivers State cannot be contested, we continue to hold the shorter end of the stick.

“A few instances may suffice: Our demand that the Federal Government return oil wells belonging to Rivers State to us has gone unheeded and been treated with levity under this administration. Rather, our oil wells have been ceded to Bayelsa, Abia and Akwa Ibom states. Even after we got a judgment that the oil wells were wrongly ceded to Akwa Ibom State and should be returned to us; only dry wells that were no longer producing oil were returned.

“In the specific case of the Soku oil wells, despite a decision reached that the monies should remain in an escrow account till all matters concerning it are resolved, the Federal government continues to pay neighbouring Bayelsa State the revenues meant for Rivers State in a classic case of robbing Peter to pay Paul. It is indeed noteworthy that we have made several representations formally and informally on this matter.

“A second instance is the total absence of federal presence in Rivers State. The ‘National Good Governance Tour’ provided a good opportunity for the Federal Government to showcase its presence in Rivers State. The tour, if nothing else, proved that there was not much to show in a state that is the cash cow of the federation. The East-West Road remains abandoned, work has been deliberately slow on the Port Harcourt International Airport, the third busiest airport in the country, while all airports started along with it have long been completed and commissioned. The Bonny-Bomu Road that leads to the only functional liquefied natural gas project remains uncompleted. In the midst of all these, our administration went ahead to fix federal roads to the tune of N103 billion. Several representations and letters after, not one kobo has been repaid. The Federal Government is actively discouraging investments in Rivers State.”

Amaechi at another forum stated, “They have become so desperate that they have gone to hire Joseph Mbu to serve as the political wing of the PDP in Rivers State. I pray to God to save Rivers State so that those thieves will not come to power and steal your money. We want to confront the Nigerian Police. When you hear impunity, it is because you allow it. There is no revolution without blood. From now till election, we should mobilize and confront the Nigerian police. If they say they are ready for debate, tell them I am ready. They should go to the National Assembly and summon me.”

Other instances that made the departure of Amaechi from PDP imperative are the following:

Posting and encouraging the excesses of the tyrannical Police Commissioner Joseph Mbu, during these inglorious days in the state.

Supporting every unimaginable act of impunity in the state, including the plot by five State Assembly members to impeach the speaker in a House of 31 members, with the hope of impeaching Amaechi thereafter. This led to the closure of the courts but they turned around to blame the victim, Amaechi.

Seizing and grounding the planes belonging to the state for no just cause. Shutting down the robust security architecture that was to save the region and oil facilities.

Harassing and intimidating the duly elected Governor of Rivers State for no just cause, and even supporting the splitting of the Governors Forum into two, to ensure that Governor Amaechi, who was duly elected by his colleagues, does not have an easy reign as the chairman of the forum.

Eze further highlighted that the world maybe astounded to learn that not minding all that Amaechi went through in the hands of Jonathan; he ensured that a slot in the State Executive Council was given to Jonathan throughout his eight years tenure as the Governor of Rivers State.

In conclusion, Chief Eze said contrary to the defective reasoning of Ambassador Akwaor and those sponsoring him, Amaechi never joined APC in order to oust Jonathan and his administration from the centre but undemocratic elements like Chief Nyesom Wike were the architects of his ouster after forcing and imposing on Amaechi all his actions in 2014 in order to join progressive forces to rescue Nigeria from the hands of the likes of Wike.

If there is anybody to blame over the exit of Dr. Jonathan from Government, it is Wike and his fellow hawks who, for the pursuit of selfish goals, plotted and ruined the administration of Jonathan, relegating him to the background and keeping him at bay on current happenings in the polity.

Finally, Eze counsels Akwaor to stop deceiving Governor Wike and help him to start preparing his handover note for an APC led Government come 2023 as Rivers State and her people are totally tired of the confused PDP Government in the State.