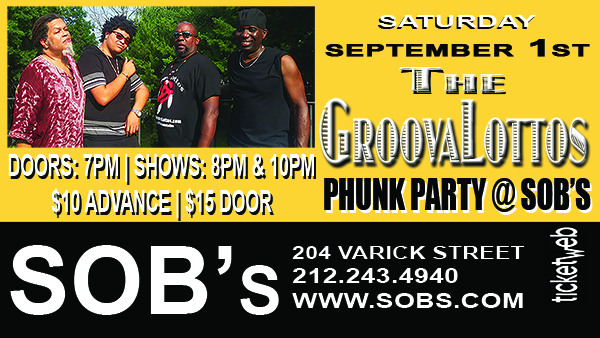 Grammy Nominated soul band, The GroovaLottos will be playing at SOB's on September 1st. Almost as impresisive as their live show are the musician's foundations as backing players for the who's who of classic and contemporary soul music.

NEW YORK – The GroovaLottos Phunk Party @ SOB's is proving to be one of the music scene buzzes of New York City for the Labor Day weekend. First coming to international attention in 2016 with their debut single, "Do You Mind (IfWeDanceWitYoDates)?" spending 41 weeks in the top ten of the Indie Blues/Americana Charts; being selected to open the 2017 Gathering of Nations Powwow, playing for almost 48,000 people; and their 2017 debut album "Ask Yo' Mama" receiving 4 Grammy nominations in Pop and R&B, their name is spreading beyond the venues and festivals of New England. New York City got a small taste of the band's sound when they staged guerilla concerts in Union Square Park and Time Square this past July, causing hundreds of New Yorkers and summer tourists to dance in the streets.

Known as a powerhouse band that packs dance floors, equally impressive are the resumes of the individuals members, two of whom have played for a who's who list of classic and contemporary soul artists. At the age of 19, drummer Eddie Ray Johnson became a much sought after touring sub drummer, having played for Rufus Thomas, Wilson Pickett, Bobby Bland and West Side Soul; while keyboardist Mwalim DaPhunkee Professor has such artists as Angie Stone, The Four Tops, and a myriad of r&b, hip-hop, and house music studio sessions under his belt. Both Mwalim and bassist, Richard Johnson played at Carnegie Hall before they were in high school, and Mwalim was one of the youngest session players in EMI Record history. Percussionist and MC, The ZYG 808, who is 15 and on the rise as a solo hip-hop artist played his first studio session at 7 and was headlining the Boston Jazz Fest at age 12.

Labor Day weekend brings The GroovaLottos back to New York City where S.O.B.'s will be the place to be.

For tickets and information, visit:
http://tinyurl.com/tgnyc