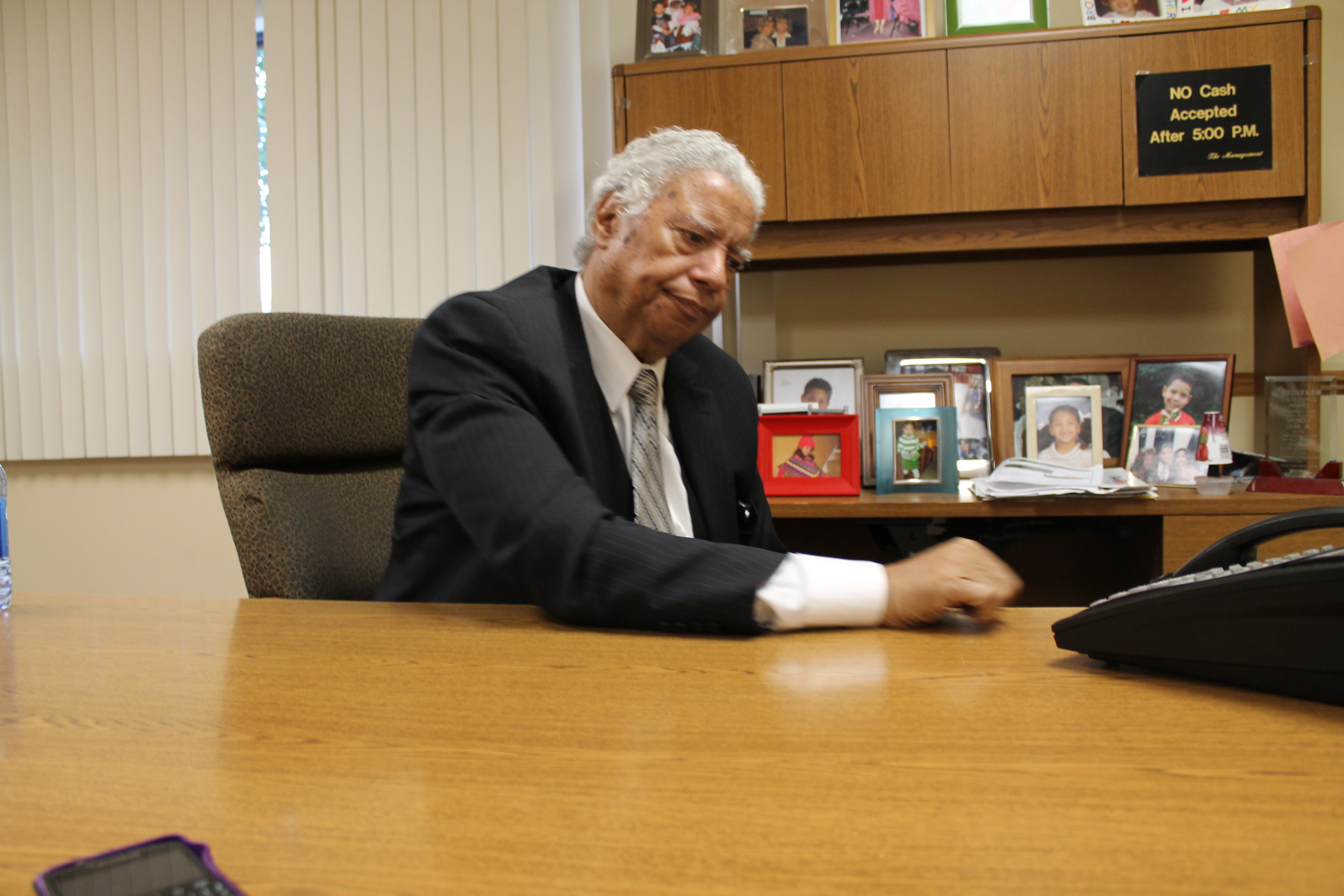 ‘King would hang his head in shame’, Spencer Leak.

Proud to have been the chauffeur for Dr. Martin Luther King, Jr. who 50 years ago today led a march on Washington, Spencer Leak, Sr., said if King were alive today he would wonder was his life and death in vain given the “social engineering of our people which has been a train wreck.”

African Americans, Leak said, have regressed. Of Chicago’s last year’s 506 homicides, Leak, who is president/CEO of the Leak and Sons Funeral Homes, said he performed 105 of them and that if Dr. King were alive today he would be hanging his head in shame over the black-on-black crime when he put his life literally on the line to fight for their equality and freedom.

Leak, who is also a trustee at the Chicago State University, first met Dr. King during his first trip to the North. It was called the “Northern Strategy” at the time, Leak said, where King had chosen Chicago as the first city in the North but later described by King  “as the most segregated city in the nation including Atlanta and Montgomery.

Leak remembers Dr. King mentioning civil rights leader Medgar Evers who was his next door neighbor, and how King, had labeled Chicago one of the most segregated city’s he had ever seen especially when it comes to housing and jobs.

At the time, King’s presence in Chicago was during the time Edwin “Bill” Barry was chairman of the Chicago Urban League at 45th and Michigan. “My funeral home was at 45th and State,” recalled Leak.

“My dad and Edwin were good friends along with Al Raby and a group of ministers extended an invitation to Dr. King to come to Chicago. That was the beginning of the Northern trek via Chicago by Dr. King and the Southern Christian Leadership Conference (SCLC) which was a new organization Dr. King had established.”

When Civil Rights activist Bill Berry asked him if his family could provide a limousine for Dr. King, Leak said he begged his father for permission to not only provide the limo for King but also to be his chauffeur as well. “That was the greatest thrill of my life,” Leak recalled.

In driving Dr. King throughout Chicago, Leak said, “I found him to be a very warm and hospitable man. While he was very articulate, he could be one of the regular guys always joking and who had a very hearty laugh. Dr. King, Leak said, “was a guy’s guy someone who could tell jokes.

“He was very gracious to me and once commended me on how good a driver I was,” reflected Leak. Many times when he was chauffeuring Dr. King, Leak said the entourage would be preceded by a police car front and back complete with sirens. “It was a very exciting period of time, and I was grateful to be a part of it.”

On Dr. King, Leak said, “I remember his hearty laugh. He would like to tell and hear jokes. He was a guy’s guy’s. He was a man’s man, and he was very gracious to me as a young man commending me on how I was a good driver. We had a police escort back and in the front with sirens going off,” said Leak.

He said it was the late Mayor Richard J. Daley who assigned some African American police officers to guard King like officer Leo Hagen and officer William Frisco, who later became Rev. Frisco. “They rode shotgun on the passenger side and I was their driver,” said Leak.

“I took Dr. King to the two Soldier Field protests which were the largest of all” of his rallies. “I took him to Stone Temple B.C. at 3600 W. Douglas and Tabernacle Baptist Church at 41st and Indiana. Where he spoke to a standing room only crowd,” he recalled.

“In addition to my job of being Dr. King’s chauffeur, I was also his gofer. I was to sell Dr. King’s book, Stride Toward Freedom: The Montgomery Story.” “Whenever he needed a new shirt or got his shoes shined that was my job,” said Leak. “I was very proud that I had been allowed to do this because at that time we knew the greatness in the future he would exemplify,” Leak said referring to prior to King’s march on Washington and his subsequent iconic “I Have a Dream” speech.

While Leak was not in Washington, D.C. for the historic August 28, 1963 March on Washington, he said his father, a minister, went along with several clergy.

When asked his opinion on today’s 50thanniversary,” Leak said, “ It is right to commemorate the 50thanniversary; however, when I look back to what was happening back in Chicagoand America 50 years ago, I have not seen any progress emanating from the march on Washington other than the legislation that came as a result of the march which was the Voter Rights bill and the public accommodation’s bill.

“As far of the social engineering of our people, it has been a train wreck,” charged Leak. “We as a people have regressed since the summer of 1963.

“In 1963, the bible could be read in the CPS and the public schools in the nation prior to Madalyn O’Hare’s successful attempt to take the bible and prayer out of the schools.

“I am looking at 50 years that I am going back and I’m asking the question that comes out of Dr. King’s most favorite song he often quoted the lyrics, ‘If I can Help Somebody,’ as I pass along, then my living will not be in vain.

“I am wondering if Dr. King were alive, when asked the question at the 50th anniversary of the march, has my living been invain, has what I found and died become inconsequential or irrevelant,”said Leak.

He gave as an example the Voting Rights bill of 1964 when Dr. King was surrounded by President Lyndon Johnson who signed the historic document.  Leak recalled that moment in history and flashed back to the times of violent scenes when blacks wee attacked by police, dogs and water hoses.

“We thought it was very optimistic that the black man would finally be able to vote as any other citizen of this nation; however, less than half of black America is registered, less than half of those registered actually vote. I question those Civil Rights leaders who say we must fix the voting rights bill that was tampered with by a recent U.S. Supreme Court decision.

“I’m saying if you fix it and you get it to where you want, it’s meaningless if black people won’t vote and that is what I see is happening,” said Leak.

As proof, he referred to the most recent election where he said, “It was so evident that black people didn’t go to the polls but complained bitterly about the results,” referring to the 2000 Bush/Gore presidential election.

Leak said blacks in Florida, where that prolonged battle for the Oval Office took place, “Half of the black residents of Florida did not vote. They didn’t come to the polls; so what good goes it do to have voting rights, Supreme Court monitoring and sustaining those rights and then we don’t have the ability or the sense to go to the polls and exercise that right to vote.”

Leak said he is “troubled by the events that have not taken place that I thought would be in place as a result of that historic day 50-years ago, and I am disappointed and disillusioned.

“As much as I am with those who are celebrating and commemorating, and I wish I could be there to do so, I’m just concerned that we as a people did not follow the precepts that was responsible for Dr. King’s speech in the first place…”

Leak was referring to the 100th anniversary of the signing of the Emancipation Proclamation, which was signed from President Lincoln “emanating from a speech he made prior to becoming the president in 1858 during the Lincoln/Douglas debates.”

“We are the spirit of the march. The spirit of the speech (I Have a Dream) was that Dr. King was trying to echo the words of Abraham Lincoln even though he didn’t say it. He was saying that we must become a nation united so that we will not be divided against ourselves and fall into the same set of circumstances that created the Civil War 100 years before,” Leak warned.