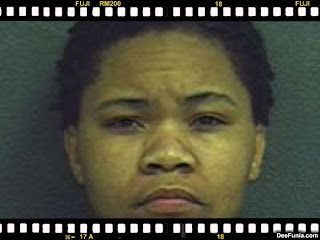 Keaira Brown was only 13 years old when she killed Scott Sappington Jr. in an attempted carjacking. She's now 16 and going to prison for life without the possibility of parole for 20 years.


The Kansas City Star reported that Brown told the judge at her sentencing on Thursday: "I'm a kid, too."
She added: "Now I feel like the state is taking (my life), and nobody cares but my family."


Yep, pretty much. I certainly don't care about you being locked up for life after you fired a bullet into Sappington's head at close range, killing him.


Sappington's father, Scott Sappington Sr., doesn't either. He told KCTV5 that Brown is an animal.
"She is an animal, and I don't think she should ever get out," he told the TV station. "Ever."


In November, a jury convicted Brown of first-degree murder and attempted
aggravated robbery. (She was initially charged in juvenile court, but the
state of Kansas won a motion to try her as an adult.)


Sappington was just 16 years old. He had just dropped off his siblings at their
grandmother's house on his way to work at a McDonald's restaurant when he was gunned down at
10th and Laurel in KCK on July 23,
2008.


Last year, Brown's mother, Cheryl, told KCTV5 that "her daughter may have been a pawn for area gang members,"
who convinced her daughter to take the fall. Witnesses told police that they saw a girl wearing bloody clothing
walking down the street. One of the witnesses was a 6-year-old, who
later testified that Brown gave her bloody clothes to a group of
children to discard. Police later traced the clothes back to Brown.
Tags: 16, brown, kctv5, kansas, police, carjacking, old, sentencing, years
★
★
★
★
★
Votes: 0
E-mail me when people leave their comments –
Follow