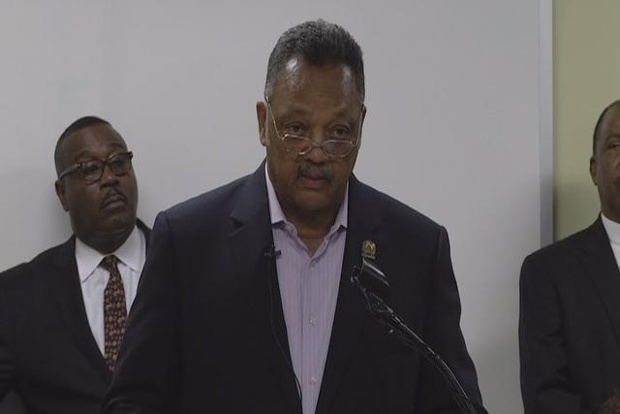 BIRMINGHAM, Ala. —Civil rights activist, the Reverend Jesse Jackson is in Birmingham this weekend, addressing the ongoing need for equal rights.

Reverend Jackson discussed a number of issues during his Saturday night press conference at Birmingham's Bethel Missionary Baptist church, including voting rights and equal opportunity employment. However, a federal ruling allowing same sex couples to marry in Alabama starting this Monday was not on the table for discussion, despite being listed as a topic on the press release for the news conference.

"Don't want to discuss that," Jackson said. "I really don't want to discuss that. It's, it has its place and it's law, but it's a diversion from the subject I'm on tonight. I'm concerned about stacked and packed districts. About the diminished right to vote. About corporation not having fair hiring and contract policies. Please, allow us to have our own press conference tonight. We can talk about that another time."

During the news conference, Reverend Jackson took time to credit President Lyndon B. Johnson for all that he contributed to civil rights, calling him the most productive civil rights president since Abraham Lincoln.

As for the Voting Rights Act of 1965, Reverend Jackson says it can no longer be celebrated because it no longer exists.

"I got the distinct impression that many will be marching across the bridge on March 8th or 9th, that weekend, thinking they are marching behind the Voting Rights Act of 1965," Jackson stated. It was diminished and undercut June 25th, 2013 in Shelby."

Selma and Shelby: The Fight for the New South

What time is it?  It’s important to be clear.  Is it mid-day and our labors still have hours to go?  Or is it evening, our work done, and we can rest our weary heads?  What time is it for the New South?  Is it time to celebrate Selma, Alabama – and the triumph of the Voting Rights Act?  Or is it time to mourn Shelby, Alabama – and the radical backlash against voting rights?

Fifty years after Selma’s Bloody Sunday that led directly to the passage of the Voting Rights Act, many will gather to celebrate that victory.  But we should understand that our work is not done. With the Shelby decision of the Supreme Court, the struggle for equal rights must go on.

Too often, we remember the triumph and ignore the backlash.  In 1870, the 15th Amendment, codified in in the blood of the Civil War, was ratified to give African Americans the right to vote.  It declared that the right to vote shall not be denied “on account of race, color or previous condition of servitude.”

But the triumph was immediately challenged by the backlash.  Across the South, states controlled the structure and laws of voting.  They immediately set up seemingly neutral barriers to voting – poll taxes, literacy tests and more – that were used to disenfranchise black voters.  The reconstruction of the South was ended as the Supreme Court ratified legal apartheid, and segregation was brutally enforced.

It took nearly a century, a mighty civil rights movement, Bloody Sunday and other sacrifices, to pass the Voting Rights Act that gave the Justice Department the right to pre-screen any changes to voting laws in states with a history of discrimination, and ban those that would have a discriminatory effect, even if they looked neutral on their face.

Two years ago, however, in the case of Shelby County v. Holder, the five conservative judges on the Supreme Court effectively gutted preclearance laws, arguing in essence that there as a new South that had moved beyond racism.

The decision had barely been announced when a virtual blizzard of laws designed to suppress the vote were introduced in states across the country – gerrymandering, stacking and packing voting districts with black voters, voter ID laws, curtailing voting days, eliminating evening voting, ending same-day registration, making polling places remote or inadequate, forcing voters to wait hours to vote and more.  Across the nation, more African Americans are in jail today than were in slavery at any one time.  The second reconstruction of the South is being rolled back.

The Brennan Center at the New York University reported, that “of the 11 states with highest African American turnout in 2008, seven have new restrictions in place.  Of the 12 states with the largest Hispanic population growth…, nine passed laws making it harder to vote.  And nearly two-thirds of the districts previously covered by preclearance under the Voting Rights Act have enacted new restrictions since 2010.

The gang of five Justices got it wrong.  With Republicans the party of white sanctuary in the South, racial animus combines with partisan interest to drive a relentless backlash against the voting rights of people of color.

So the celebration of Selma and the 50th anniversary of the Voting Rights Act should turn a harsh spotlight on the Shelby decision that struck down the heart of that law, and ushered in a new assault on voting rights.   Selma marks a great victory, but our work is not done.  Much more is needed for this nation to fulfill its promise of “liberty and justice for all.”