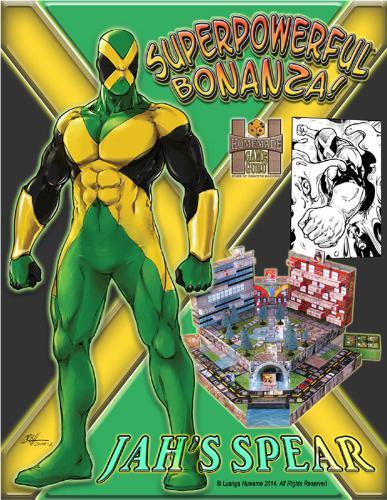 Starting on March 10th, YouTube's Homemade Game Guru is utilizing Indiegogo.com as the launching pad for a niche board game entitled 'Superpowerful Bonanza' – a three-dimensional handmade wood and cardboard board game designed to look like a multileveled mini city. The game features a new line-up of superheroes and villains from around the world. One of those characters is called Jah's Spear and he was designed to become a mainstream superhero representing the country of Jamaica.

Superpowerful Bonanza is a board game designed to look like a city and play like a classic 'side-scrolling brawler' video game. It includes five super-villains who control each level of the game and players have the choice of four superheroes to take back the city from the bad guys. The hero choices include a Mexican-American school teacher and ex-marine turned heroic masked vigilante (Demet Marks), a fiery-redheaded mystical heroine fromNewfoundland, Canada (Lacrossa), a tough British-American street cop (Sgt. Gregory X. Brooks) and Jah's Spear – a Jamaican government assassin sent by the Prime Minister's Office to hunt down a wanted corrupt CEO named Playcare.

In the game, Jah's Spear is a costumed vigilante whose true identity is unknown and only the Jamaican Prime Minister's office knows his name. Explained in more detail within a one-shot comic book that accompanies the Superpowerful Bonanza Indiegogo crowdfunding campaign, Jah's Spear is Jamaica's most respected and feared hero known for his sometimes heavy-fisted and brutal techniques to bring wanted criminals to justice. Taking inspiration from Marvel Comics' Wolverine, 'V' from V for Vendetta and DC's Lobo 'anti-heroes', Jah's Spear was designed as the 'good guy' on the side of justice and peace, however he has a temperament and attitude that makes him dangerous.

"With the exception of Nicholas Da Silva's 'Dread or Alive' and a small handful of minor characters at the large comic publishers, like Marvel's 'Hairbag', Jamaica has lacked a serious hero or even anti-hero character in the comic market," stated Lue Nuwame, the game's inventor and Homemade Game Guru host – whose background is half Jamaican and half Togolese. "I created Jah's Spear as a tough character who is honest in his responsibilities, intent and tactics. He isn't about self-indulgent altruism – he's a warrior fighting evil for his country by any means necessary!"

As for the character's name, Nuwame said he won't immediately reveal why he chose it. When the campaign succeeds, Nuwame promises people will learn more about the origins of this character.

Lue Nuwame can be reached via email or by one at 1-647-407-2614 for more information. YouTube channel: https://www.youtube.com/homemadegameguru.