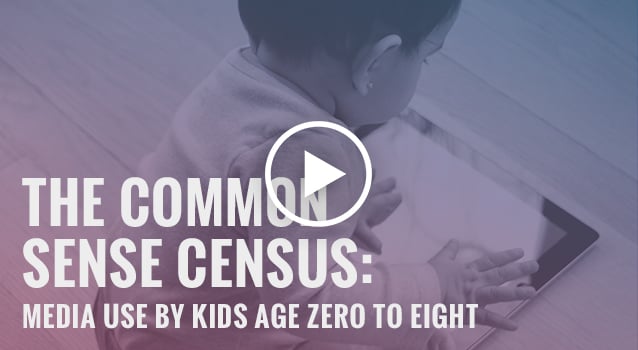 Average Amount of Time Spent with Mobile Devices Skyrockets, Increasing Nearly 10 Times, from Five Minutes a Day in 2011 to 48 in 2017

SAN FRANCISCO, Oct. 19, 2017 /PRNewswire/ -- Common Sense today announced the release of The Common Sense Census: Media Use by Kids Age Zero to Eight, the third installment in an ongoing series of national surveys tracking the use of media and technology among U.S. children from birth to age 8. Among the key findings is the spike in the number of young children who have their own tablet device (now 42 percent, up from 1 percent in 2011) and the amount of time children age 0 to 8 are spending with mobile devices (48 minutes, up from just five minutes in 2011).

The Common Sense Census: Media Use by Kids Age Zero to Eight is based on a large, nationally representative sample of respondents and replicates methods from 2011 and 2013 to gauge how media environments and behaviors have changed over the years. At a time of revolutionary change in the media landscape, the study is the only one of its kind, tracking young children's use of new mobile media devices and apps along with older media platforms such as television, computers, and books.

In light of the new research, Common Sense is launching a series of new PSAs featuring actor Will Ferrell as a continuation of its ongoing #DeviceFreeDinner campaign. The campaign challenges parents and kids to put down their devices during dinnertime and enjoy in-person conversation. The new ads were developed in partnership with Bay Area advertising agency Goodby Silverstein & Partners.

Additional key findings from the report include the following:

"In today's tech-driven world, where things are moving so quickly, it is really important to step back and take a hard look at what technology kids are using and how they are using it," said James P. Steyer, founder and CEO of Common Sense. "Over the last six years, we have seen massive growth in media use and tablet ownership, and we haven't even begun to experience the explosion of new technologies like virtual reality and voice-activated assistants in our homes. If we want to ensure our kids develop well and are successful in life, we have to make sure they get the most out of tech while protecting them from potential risks -- and that means paying close attention to the role media is playing in their lives."

In addition to the findings mentioned above about how media use by kids has changed, the report notes that:

"It is promising to see many of the gaps closing when it comes to access to technology and devices among all segments of our population," Steyer added. "Technology is integral to success in our world, and every child deserves access to it. Over the last several years, we have seen the digital divide and app gap closing, which is a very positive development for our country."

The latest #DeviceFreeDinner PSAs, created by Goodby Silverstein & Partners, star Will Ferrell in familiar scenarios that could be plucked from anyone's dining room, including a scene in which a family has settled into dinner and someone won't get off their phone -- only instead of a surly teenager or a precocious child, it's parent Will Ferrell.

"It's no fun to show someone disciplining a kid, but disciplining a parent who happens to be played by a famous comedian? Major fun," said Jeff Goodby, founder and chairman at GS&P.

"We know that kids who have family dinners get better grades, have healthier eating habits, and have fewer behavior problems," said Margaret Johnson, partner and CCO at GS&P. "So we enlisted some celebrity help to show the importance of having device-free dinners."

The Will Ferrell PSAs, which can be viewed at https://www.commonsensemedia.org/device-free-dinner, include the following:

Visit www.commonsensemedia.org/device-free-dinner to learn more about the campaign.

Methodology
This report presents the results of a nationally representative, probability-based online survey of 1,454 parents of children age 8 or under, conducted from Jan. 20, 2017, to Feb. 10, 2017. The survey was designed by Common Sense and VJR Consulting and fielded by the research firm GfK, using its KnowledgePanel©, a probability-based web panel designed to be representative of the U.S. population.

About Common Sense
Common Sense is committed to making kids the nation's top priority. We are a trusted guide for the families, educators, and advocates who help kids thrive. We provide resources to harness the power of media, technology, and public policy to improve the well-being of every child. Learn more at commonsense.org.