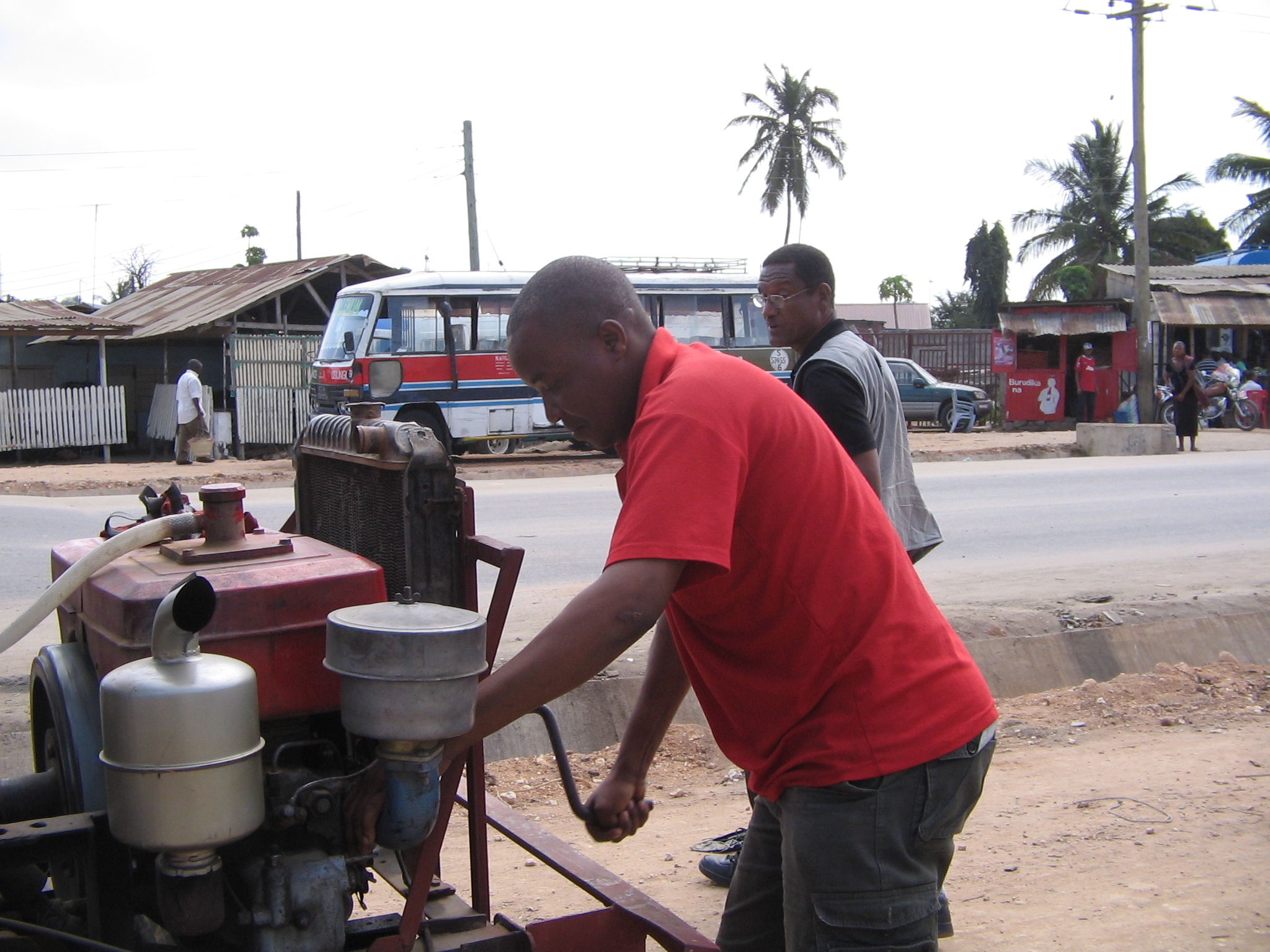 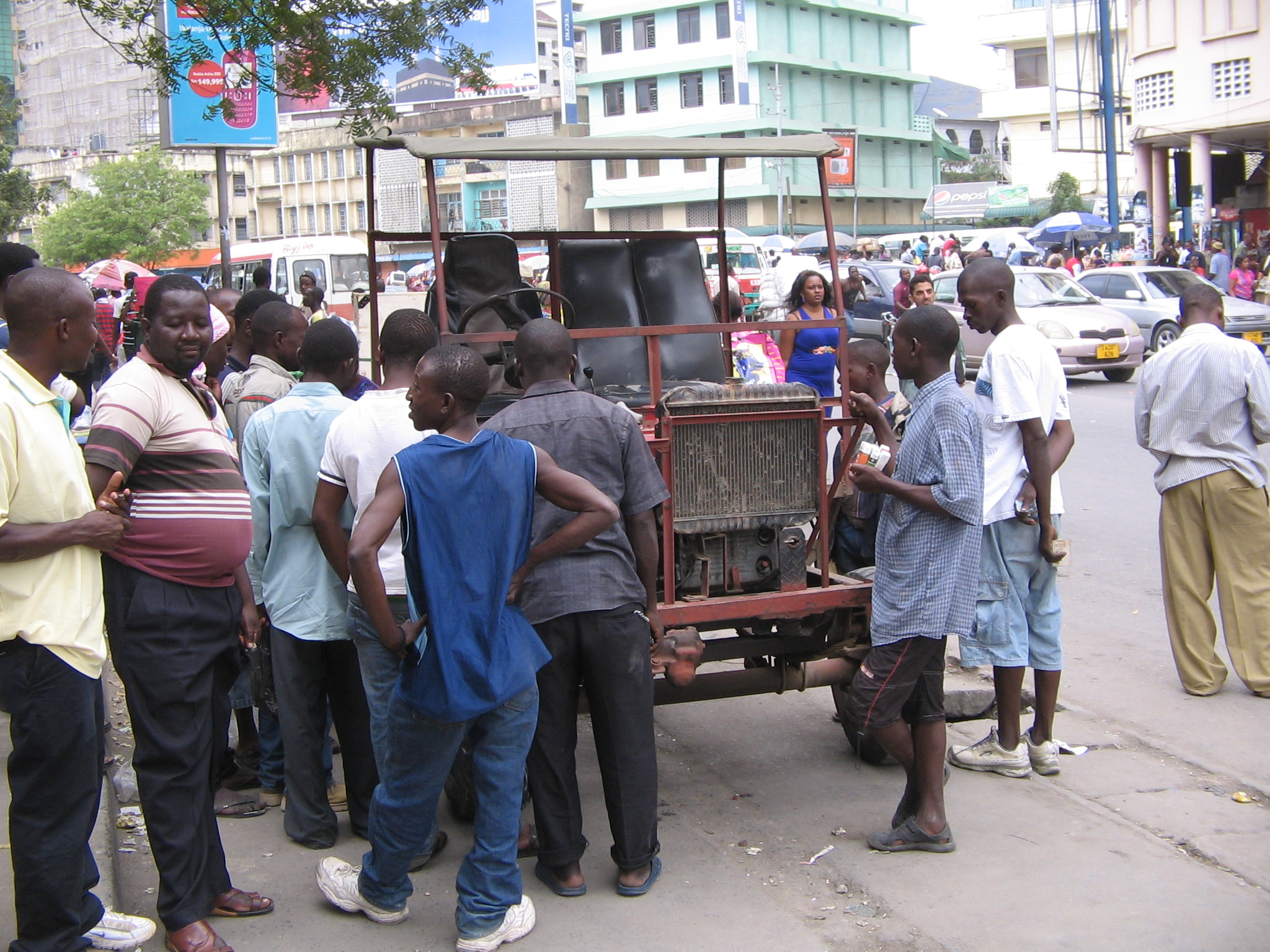 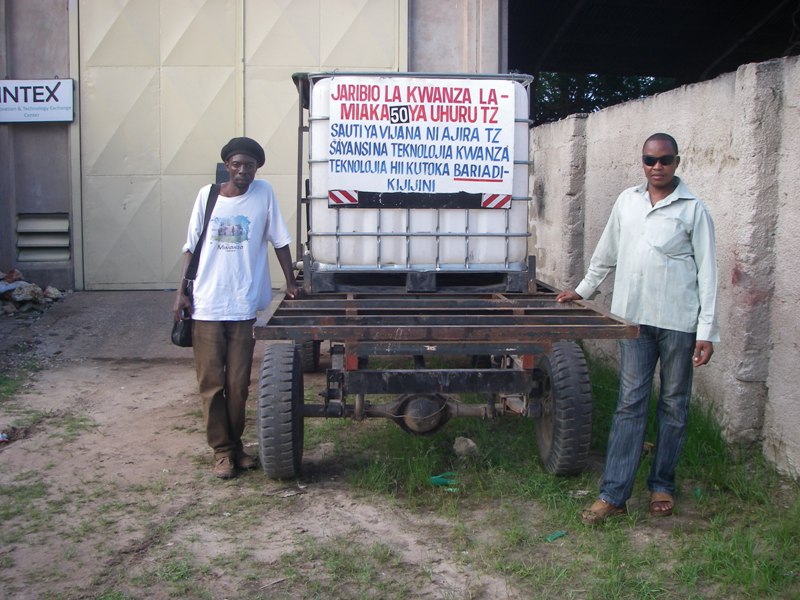 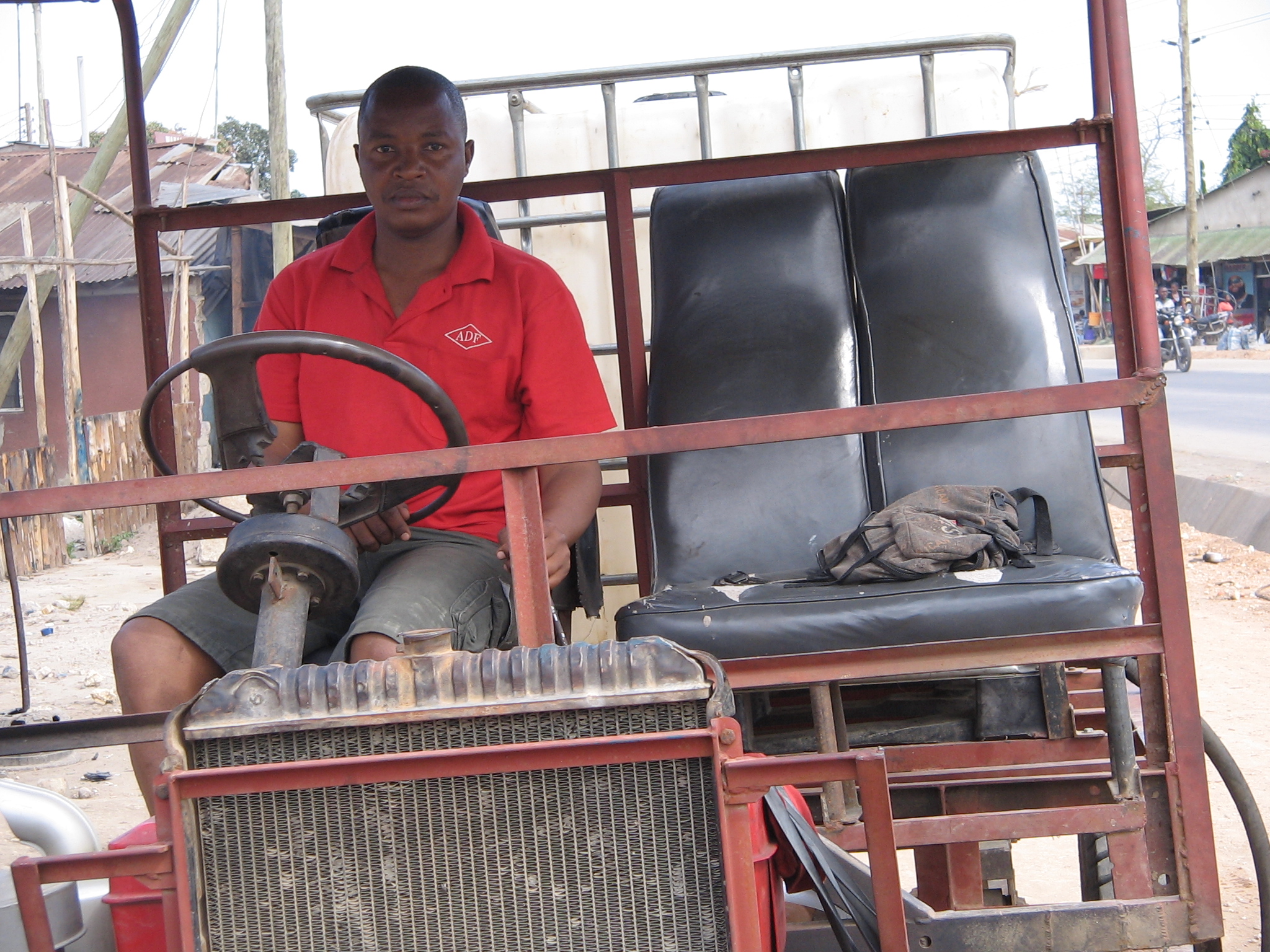 Have you heard the popular story of kondi, the young boy who was eager, determined and persistent to make his own toy car-the galimoto?

It is in the book titled “Galimoto” (1990) by Karen Lynn Williams about which a child main character- a seven years old boy named kondi had dreamed of making a toy car. This was seen as impossible for a little boy of his age. Nevertheless he did all he could, going places to places, taking risks to collects materials things for same and then actually built one to the admiration of everyone..!

The story is based on the experience of the writer while living in neighbouring country - Malawi in 1980s. She saw and was fascinated by the creativity of Afrikan children there, in making their own play toys – called “galimoto” out of necessity of lacking the ready-made ones. Thus a book, “galimoto”, ever popular since its first publication in 1990.

Now in real life in Tanzania, a young man named Ntubanga has just done that. He kept his childhood “kondi dream wish” and has ended up building the first ever locally made car in Tanzania.

Surprisingly like kondi, he is a grassroots person with only limited education, thus one seemingly impossible of making a car..!

It is to be named”Galimoto’kaliNtubangaBariadiTz1”-after the inventor (Ntubanga), his childhood dream of making same (galimoto-kali) and place where he comes from (Bariadi Tanzania), 1 being the first one of its (this) kind..!

With limited formal education, he has (however) applied his imagination plus common sense to connect the seemingly unconnected-thus vindicating the saying that “imagination is more important than (formal) knowledge”..!

The car has already made its maiden trial “sail-far” safari, on road travelling from Dar es salaam where it was made at a welding workshop under a big tree, to Dodoma-the capital  and back, covering without complication, 450km twice, (thus 900km), on the journey that took 12 hours plus either way..!

Its speed is up to 60km per hour and its fuel consumption is quite economic, only consuming 30litres diesel per one way.

So far the young creator has done it all on his own…self-reliantly…using his own pocket money to first collect the materials things needed (kondi-like) and then  build little by little, openly, at that welding workshop under a tree, hearing while working on, sceptics, pessimists defeatists and cynics pedestrians passers-by, saying “it wouldn’t work”..!

According to himself, he has done that to fulfil his childhood dream. As a child back in the village of Ng’wang’wita, area of Ng’wangimu, ward of  Nkoma in Bariadi District Shinyanga Region, he used to make toy cars-“galimotos” and thought that when he grows up he will make the real one. And he sees this as just the beginning of flowering of his creativity. He plans to make other kinds of devices (implements) to meet the challenge of transportation, produces and goods carriage in rural as well as urban areas, water availability, its carriage and storage, irrigation; electricity supply and agricultural agrarian revolution via simple technologies etc. This means that here is “Tanzanian Thomas Edison” potential too..!

He says his car is multipurpose that, apart from being a 1.3 tonnes “beast of burden” able to carry up to 10 people a group with their goods, or alternatively transport 1000 litres of water a go, can as well Grind mill maize and other cereals, Thresh same too, Extract/squeeze out sunflower oil from sunflower seeds, Pump water from wells and ponds, Make mud-made bricks, Be source of (produce) electrical power in the village for computer learning courses right rural there.In fact he plans to make next, a tractor that can cultivate three acres a morning day, and alleviate peasant villagers the burdensome of hand hoe using.

The government authority through its Ministry and department-of “science and technology” which is supposed to deal with such creative individuals-Wabunifu and their inventions, was consulted after the car was on the road, to witness/access it and give due comments and grade same. But "as typical as usual", its red-taping bureaucrats haven’t been available to see him yet, ever forwarding/postponing appointment telling him “come next week come next week” indefinitely…

He has given up on them on realising it is time wastage exercise that distracts his attention needed for total concentration working further for his car, as well as battling it out on daily basis, for meagre little shillings, for the survival living for the day..!

That means he hasn’t gotten any necessary support, any support at all. A grassroots man on his own..!

Please whomever whoever…”come one come all”…to do whatever to nurture, promote, support, incubate, invest etc on this basic yet powerful invention that does mean a lot economically! It is the basic elementary and necessary step for industrialization and agricultural revolution for Sub-Sahara Afrika, that Afrikans has been all along yearning for-in vain hitherto..!
Let this invention creates mass cars, jobs, income, facilitate agrarian revolution, alleviate women-fork burdens of carrying from afar, firewood and farm goods, rescue to save hard gained foreign exchange so far used to buy cars for “officialdoms” from overseas, and proves beyond doubt to black people themselves that - even they blacks, even with limited formal education, even if they can’t speak English, can make/invent cars and other moving motors if only they wills..!

This car is inspirational as it is so far the only one in the streets of Dar es Salaam (indeed the whole of Tanzania) that is locally made, 50 years after Tanzanian uhuru..!
All others are of Japanese economies and other Europeans and even ford-Americans..!
Likewise from Indian, for the rickshaw “bajaj” brand..!
Even bicycles we use are imports..!
Chinese goods (motorcycles and etc) have invaded in a big-big way, an Afrikan market, all over..!

The Afrikans have by and large fallen in love with the “moving houses” (to use word of late Ndabaningi Sithole) ever since the first one we saw that originally we feared its sound and did run away from..!
Then we approached it curiously, and learnt to drive it and loved it…
It has by-and-large become our indispensable part…
Even our own children all over sub-sahara Afrika, are fascinated by it and in fact designs and make all kinds of its replica toys of, the “galimotos”..!

But somehow when we “grow up”, we seem to forget/loosen the ambition of making the real ones, Of our own, even for those who study it academically, theoretically..!

50 years run since Afrikan independencies, universities have been educating to produce “science/engineering” graduates.

But somehow they have failed to make this device that all of us Afrikans love…in fact it is one of the status symbol in our modern society..!

There is a huge-demand indeed for same, if there could be mass production to meet mass demand (heart desires!) for same.

The writer of this story has been in close contact with innovator…to mostly inspire him to go on “not (don’t) give up”. For the writer himself, during youth-hood, passed the same uneasy path for another different invention..!
That is the story of another day.

Here is a budding "industrialist ” who could provide the base for authentic industrialization of sub-sahara Afrika. The Industrialisation so much imagined, theorized, advocated, and discussed about on workshops, conferences, Parliaments etc..!
So let anyone with any “Tanzaphilia/Afrikaphilia” left still do  the best, to intervene using any (connections) means necessary to make sure this young inventor, gets the attention of whomever can help to provide him with facilities and capital (investment) so that he transforms his invention into an industry that would Produce simple & appropriate cars en masse, Create and provide employment to the “mass of cheetah” (to use George Ayyitey’s words) being the post-colonial generation of Afrikan youth, Opening the way for black Afrikan industrialization right from the grassroots through Establishing “technological villages” (Silicon Valley like?) for such creative individuals, initiate at this age, for this young generation, the Ujamaa based (now to be communitarianism!) experiment that late philosopher Mwalimu Nyerere envisaged, as the technology has really leapt-frog-forward to make such thinking possible, Stimulate thinking of how / why our “elites” educated class, masters (on papers ) with researched PhD’s have so far failed to do this while this man, a grassroots man-who doesn’t speak English, has..!

Likewise, Facilitate movement of East Afrikan people (who are theoretically possibly to be “one East Afrika, one nation” by 2020) and thus coming together/interactions of same at the grassroots level…

The innovator young man has only elementary/primary education, he doesn't speak no English at all…the implication is…Here is a case/ proof that what we need is “know-how-ledge” and not English…that it is possible that we can use Swahili language (up to university level) and be inventive still!

That what is needed is technology –starting from simple at the grassroots up and not “science-theory-ologies” at the top ivory tower there..!
It is obvious that such ones study “language of science” rather than science itself..!
That they graduate to know “language of technology” but not technology itself practically..!

Furthermore, Here is a point to shatter the myth of the “transfer of technology”…from developed world as donors to the recipient rest of us…

For decades now, our learned elites have somehow failed to “absorb” that allegedly to-be-transferred transferable technology..!?

Is it time (overdue indeed!) to shift the paradigm, think anew and go work hard to acquire same not through “transfer” but by finding it out for itself right from the basics..!

This car galimoto’kali invention represents exactly that, a breakthrough unto a new path..!

Afrika needs to industrialize; most ones seem to agree on this premise. And it is from simple inventions at the grassroots like that that can go a long way to make that industrialization possible, step by step..!
This is the challenge to all ones…to help him through by any ones connections, on any-which a one can..!

Should that be, then by 2020, this brand can steadily increase on the streets (urban) and rural Tanzania, East Afrikan community and beyond.

Let that be vision that should come true..!

In Tanzania there is tendency for “vogues” to come and go, short-lived. Let this be not just another one to come and go by into the past to be forgotten unto dustbin of “zamani”. Something has to be done to make it sustainable because it is a breakthrough that means so much…with unlimited possibilities..!

Karen Lynn William’s “kondi boy” could be a fictional character based on childhood life in neighbouring Malawi, but here in Tanzania that story has come true.

I have necessarily become his (interim) adviser, Mentor, Guide, elementary grassroots incubator, Midwifery, PR, Spokesman, Writer etc, to help in releasing him (case of division of labour) to concentrate solely on his creativity, further making of same, as he cannot practically do all that on his own, and don’t have computer/laptop, camera and don’t know yet how to use computer/internet.