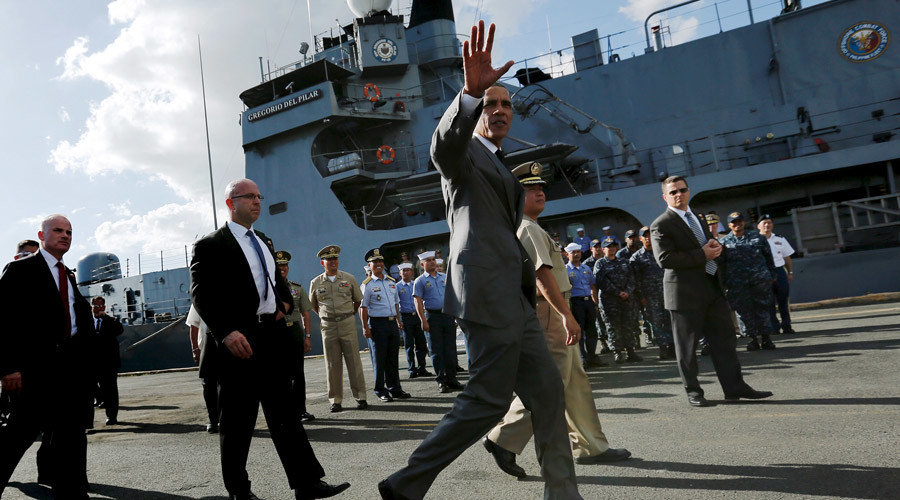 U.S. President Barack Obama departs after his remarks and a tour of the Philippine Navy's BRP Gregorio Del Pilar at Manila Harbor in Manila, Philippines, November 17, 2015.© Jonathan Ernst / Reuters.
President Obama has arrived in Manila, Philippines to promote US neoliberal-fashioned “free trade.” He has come here to tout Asian Pacific Economic Cooperation (APEC), an organization founded to protect US hegemony in Asia.

I am in Manila, along with hundreds of others bearing the brunt of these policy decisions, to greet our President with a message that he should go back home and secure the needs of the people of the US and stop the plunder, division, and warmongering in Asia. The “pivot” to Asia involves increased militarism in the region as well as multilateral and bilateral trade agreements spearheaded by the US that bind the region in its neoliberal web.

President Obama seems primed to open up another war front in US efforts to “contain” China while his war in Syria is still hot. The current new flashpoint in Asia is the South China Sea where the US is challenging China’s extension of its territorial waters after reclaiming islands and creating new islands there.

As part of its “pivot,” the US military has returned to The Philippines after the people’s struggle there ejected it; and seeks to use Japan as part of its military bulwark in the region even as Japan focuses on its recovery in the aftermath of Fukushima. Incredibly, now Japan is talking about amending its Constitution to allow its participation in military action to support the US while the US expands its military presence in the country. And while South Koreans would really like to focus on repairing the shattered relations with their brothers and sisters in the north, the US has ensnared South Korea in the web, also, threatening to deploy a pricey anti-ballistic missile defense system in that country. Therefore, the American military industrial complex will soak up money that is much-needed to solve local problems, including in the US.

Find out why @POTUS was on a cutter & how we're strengthening the security of Philippines → https://t.co/tE5Yy4RL8npic.twitter.com/3B5985cqrg

In President Obama’s US, there is money for war, but no money for the poor. The people of the US are in crisis. Senior citizens are now absorbing the news that there will be no increased monthly allocation (known as cost of living adjustment (COLA) for their Social Security payments.   Too many senior citizens rely on these payments as their only source of income after retirement. To steal from American seniors in this way is not necessary and only occurs because the ‘US Deep State’ increasingly views seniors as disposable now that their days of labor are over. US policy, however, doesn’t stop with stripping seniors of necessary funds for living. Children’s right to education is attacked by the privatization of education under President Obama that has seen public schools shut down and so-called “charter” schools—that is, private schools erected in their place.

These charter schools pay huge amounts of money to their owners and CEOs while stripping teacher’s pay to the bone. Students, more than any other group, are subjected to the worst neoliberal policies pursued by President Obama. And, with privatized prisons, always hungry for more and more prisoners, the school to prison pipeline is secure. And the privatized prisons make a profit, to boot!

But, poorly paid teachers are not the only insult that students in the US must absorb: the number of hungry students is at an all-time high. Every night, it is estimated that over fifteen million children go to bed hungry in impoverished families inside the US. When they awake in the morning, more than ever, their families are homeless and these students must go to school from homeless shelters. Shockingly, these homeless shelters are even under attack, like the situation with the Metro Atlanta Task Force for the Homeless, and many are being closed as the need increases. These purposely deprived students, then, are expected to learn a curriculum that downplays the importance of critical thinking, an economic environment that saps the yearn to learn, and public policies that discourage higher education, like burgeoning student debt because of the outrageous costs of education in the US. Sadly, education, just like about everything else has become a profit center.

Now, these already-crippled students are forced to make their way to schools on pothole filled roads as investment in public infrastructure plummets in the face of profit-driven neoliberal policies. While the US war machine rages globally, the infrastructure inside the US is in a decrepit state. Sinkholes are mysteriously appearing, swallowing whole houses in the process; families are forced to boil their water because local clean water systems are in a state of disrepair. Rampant mining inside the US has created new emergencies like earthquakes in places totally unaccustomed to them. Bridges are crumbling. In fact, civil engineers most recently (2013) gave overall US infrastructure a grade D+.

American neighborhoods are becoming food deserts due to the direct attack on small family farms, especially Black farmers, in favor of corporate farms that are Monsanto-GMO laden production sites. Because of the predatory practices of US banks, the middle class has watched as its ranks have dwindled and their homes stolen by crooked banks. Sadly, President Obama’s policy supports these ‘banksters’. Incredibly, not a single one of them has even been threatened with prison for this massive theft that has seen more wealth of Black America stolen than at any time since the Trans-Atlantic Slave Trade.

Yet, this is the same United States that hails itself to the world as the greatest democracy, a beacon of economic success, and a champion of human rights. Nothing could be further from the truth.

Therefore, I call on President Obama to pivot back home and take care of the needs of the people of the US and stop the war mongering and the projection of Russia and China as enemies.

Obama has a lot to keep him occupied in the United States, serving the urgent needs of the people. There is no need for him to inflict more pain on us. At the same time, the important work of Thomas Piketty exposes the results of US neoliberal policies: growing inequality. Therefore, President Obama should welcome local and global policies that diminish inequality not perpetuate it. I also believe such a shift in US policy would be greatly appreciated by the Americans who could finally see their needs met by a concerned and caring government.

I still believe that the US people can change the policies and direction of our country. Things in the US are now bad enough to force people to look at different ways of resolving their problems. I hope it is clear to them that neither Democrat Hillary Clinton nor Republican Jeb Bush are solutions to the problems that ail America; rather, they helped to create these problems. Therefore, I am hopeful that a critical mass of us working together to change the mission of future US governments will be successful–starting in 2016.