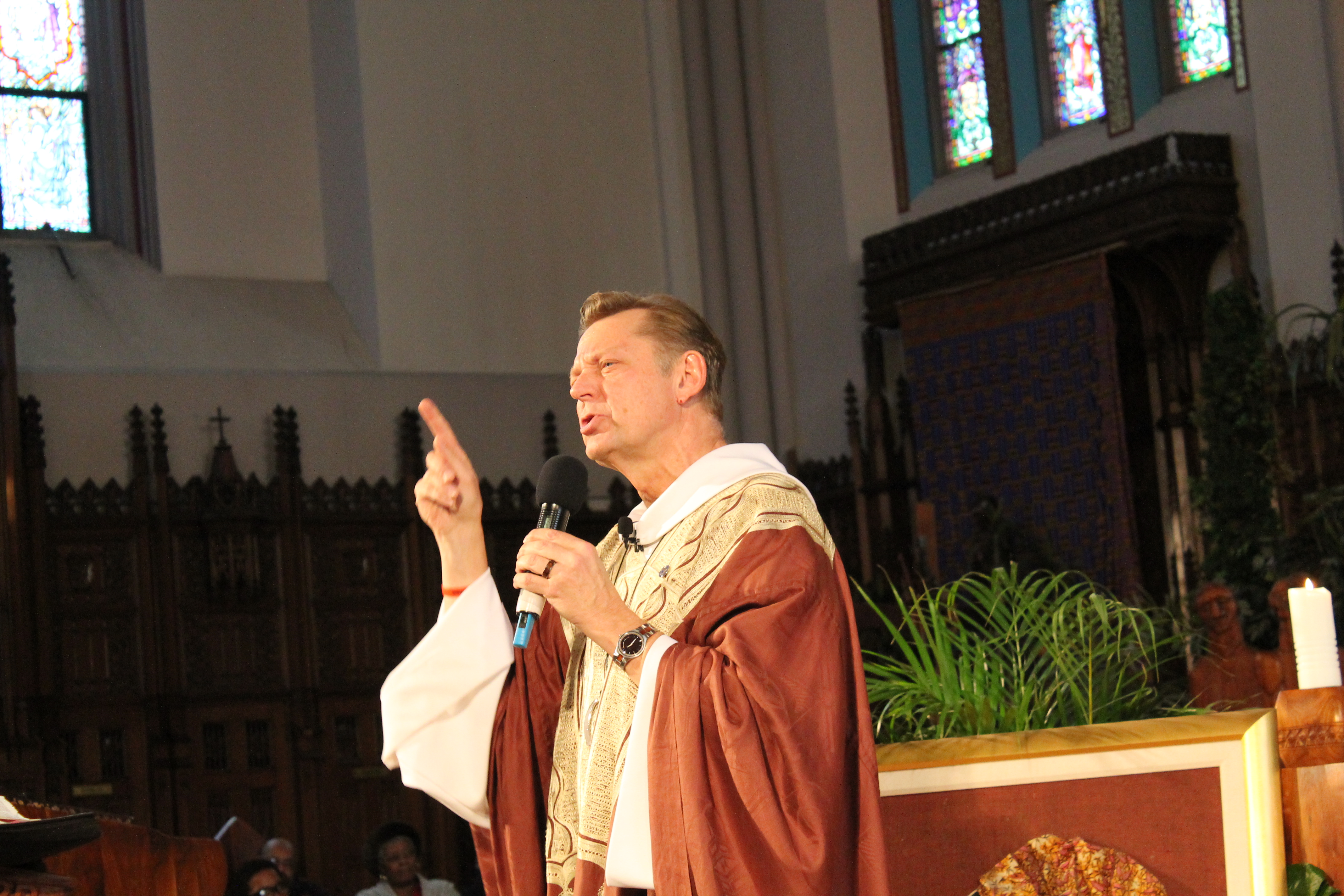 While 47-year-old Michael David Dunn, who killed 17-year-old Jordan Davis over some loud music was convicted on three counts of second-degree attempted murder and faces 60-years in prison, Father Michael L. Pfleger Sunday said that is not good enough because the jury failed to convict him for murdering the unarmed teenager.

Upset that the jury was deadlocked on the murder charge against Dunn, Pfleger said, “The boy died. He was murdered.” Referring to Dunn who faces a 20-year minimum mandatory sentence on each count that must run consecutively, Pfleger said, “I don’t care if he stays in jail for the rest of his life that’s not good enough because" Dunn was not convicted of murder." The man killed," Pfleger said.

“You shot at a carload of young people who were unarmed," he said of Dunn. "You took his time to go in the glove compartment, take out your weapon, load it, shoot, pause and shoot again and then go home and have pizza with your girlfriend,” said Pfleger. “And, he was acquitted.”

Referring to causes like saving whales and other endangered species, Pfleger said, “Maybe we need to petition the Secretary of Interior to make black and brown boys endangered species in America because right now it seems like killing them is legal.

“I know Florida. Every black person should move out of Florida because Florida is crazy,” said Pfleger referring to another Florida case involving the fatal shooting of Trayvon Martin, 17, by George Zimmerman who was acquitted. Florida’s “Stand Your Ground” laws have become the talk of the nation including in Illinois.

“They’re trying to bring “Stand Your Ground” here in Illinois,” said Pfleger. “We got to do something. We got to fight. We got to step up and get loud otherwise they are going to continue to do it and it’s going to be open season on our young men,” Pfleger told his congregation.

Still angry that the jury failed to indict Dunn for murdering Davis, today Father Pfleger posted this on his Facebook page: “We can and should continue to be outraged with the Murders of Trayvon Martin and Jordan Davis, and Yes the evil Stand your Ground Laws, unjust Justice system and the Proliferation of Guns....

“But Brothers and Sisters until we have the couragein America to Unravel and Eradicate the Sin and Evil Of Racism in the Bloodstream of America, Every Child of Color is in Danger of being killed and Black Youth, especially Black Males are becoming an endangered Species,” wrote Pfleger.

Besides facing 60 years in prison, the jury also convicted Dunn of either shooting or throwing a deadly missile, which is a felony that can get him up to an additional 15 years. According to State’s Attorney Angela Corey, her office will retry Dunn on first-degree murder charges.