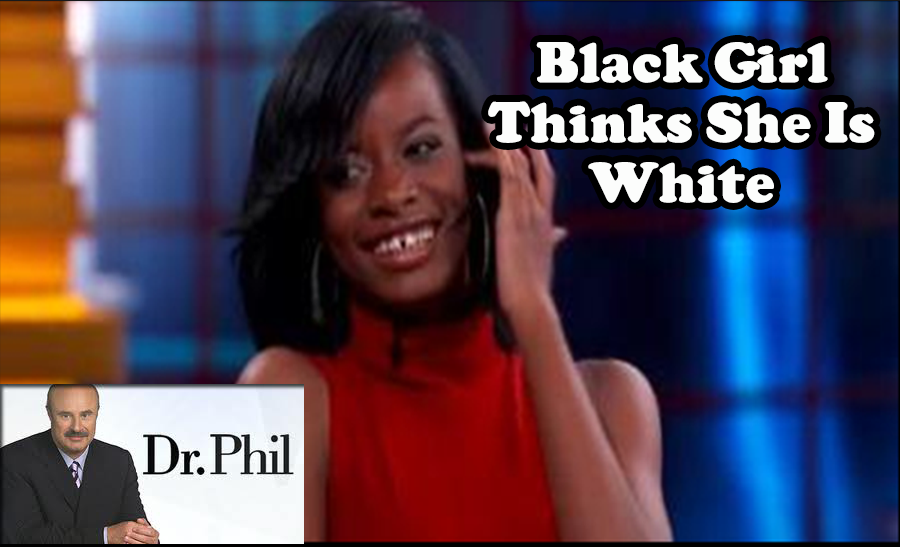 The Title of this video is, "Dr. Phil, Black Girl Thinks She Is White"

When I first saw this video of Treasure Richardson, I knew from the start it had to be a set up, a hoax, a scam or some such thing as that.  In the ensuing days after the airing of this segment, with a little ground work and exposure by Treasure's Sister, Nina, it has come to light, that it is simply a scam for ratings and notoriety, perpetrated by a young woman and her mother who come from a very painful home life experience.  While that is no excuse, it does help to fan the flame of the outrageousness of their behavior that subsequently landed them on the Dr. Phil Show.

From my experience with African Americans who identified as "white" it would only take a moment or two before the "black-ish" would come out.  The illusion of race is really to perpetrate the fraud of the difference in color, when in fact it is the difference in ethnicity, culture, social orientation, lifestyle, etc. along with genetics that cause people of a certain ethnicity to manifest physically in  a certain general form causing a general grouping of individuals.

To my thinking, White Supremacy is just as toxic as Black Supremacy.  The two paradigms are pitched against one another to keep the separation active, but from a high station above the clouds, looking down on this planet, you see people, different people, but people nonetheless.

To me it shows how Creative the All Encompassing Divine Force can be in expressing itself through our physical reality.  A garden filled with one type of flower holds a certain beauty but a garden of many flowers has a certain exquisite beauty that leans towards being quite breathtaking.

Blind Ridiculous Conformity ensures success in the "out-sane asylum" controlled by con artists. In wrestling,and you control the head of your opponent to direct the body of your opponent.

This show, like many others could be well scripted performance art. The programming is directed by mischief makers, i.e. authors of confusion, to condition mentalities for continued slavery of the populace.

We should first ask: What is the purpose of this story? Why is she being featured and promoted?? How does it serve system lords?

Confusion that confuses to more confusion is understandable in western cultures based upon confusion, while making that confusion seem like normal behavior.

She is only telling the same lie as so called "white people" tell.

If others can tell the same lie, why should not she?

Pay attention to Dr. Phil's comments and assertions. They are misguidedly misinformed and shows his ignorance based on the inconsistencies in his description of race being biologically definable.

He is after all DR. PHIL. Which means that his thoughts and research should be responsibly connected to the information he dispenses to the public such that it educates, rather than sensationalize the mind.

The so called, "well educated," therapist was not any better. Neither she nor Dr. Phil chose to address Race, Racism, or Whiteness, with the fact based approach which she so eloquently referred.

The system encourages scientific ignorance and moral stupidity, then preys upon it.

Snow is white. The albumen of a cooked egg is white. Clouds are white.

Humans are not White

The concept of whiteness is the source of racism. Every other definition of race is based on this flawed make-believe of "whiteness."

The invention of "whiteness" is rooted in pretension and presumption of the mentally/emotionally unstable mind. It is "Royalism," that is beyond reproach, inquiry or inspection. It's great to be the a royal or associate one's validity with royals.

Royalty does what it wants to do, without question  It is always the victor with the spoils. It is the way of spoiled, overindulged children. They get their way at the expense of others deemed by them as inferiors, no matter what.

The designation of so called "white people" is even scientifically inconsistent with the definition of white itself. If white is the mixture of all colors (i.e. wavelengths of light),  then that would mean that so called "white folks" are the most colored folks of all folks.

The inconsistency is heard when someone uses the oxy-morron that describes a person as a so called "black albino!"

Incidentally, the largest contingent of Albinos is in East Africa.

The attachment to "Whiteness" used to define any Humans,  as superior, is a pathological dis-ease designed to soothe mental and emotional instability, while cloaking inadequacies and validating oppression upon any arbitrarily group designated as "not so called white".

The quality of the content of ones character has nothing to do with physical attributes of Humans. It has more to do with behavior and beliefs upon which that behavior is based.

All Humans without exception are related. That is to say they are family. A dysfunctional family, but they are family nonetheless.  The con artist profit from the dysfunction and keeping the Human dysfunctional. Read Stephen J. Gould's, "The Misrepresentation of Man," to understand the history of the propaganda against scientific facts.

Here is an experiment for you: Ask a "so called white person" to prove without a doubt that he/she is white.

Their explanations will be no better than this young lady on Dr. Phil. You will see it is a matter of Blind Ridiculous Conformity or simply put "make believe."

It is time to "raid the game," by going to the falsehoods of the matter and challenging the facts to arrive at the truth.

This concludes, Mr. White commentary on the Dr. Phil Show, featuring a "Black Girl who thinks She Is White."

Thanks for listening, thanks for watching, peace and blessing to you, your family and loved ones.

How ‘white people’ were invented by a playwright in 1613 https://aeon.co/ideas/how-white-people-were-invented-by-a-playwright-in-1613

Why Do We Not List Black and White as Colors in Physics? https://education.seattlepi.com/not-list-black-white-colors-physics-3426.html