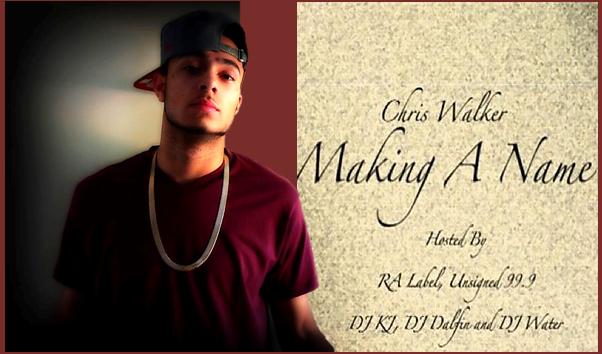 Yesterday, March 16 at 11 am on Atlanta's Inspirational radio station Love860 with Fastlane Dee the topic of the show was 'Domestic Violence'. It's a subject we can never discuss too much about because it is an issue that has grown to be an epidemic among the youth of today. The senseless murder of Atlanta resident Christopher 'Skywalker' Walker this past Monday was befitting of this very topic which circled local news. Chris, at age 19, was found shot in the back of the head in his drive way in Milton, Georgia with the murderer still unknown and roaming freely right here in Atlanta. Mr. Walker has close ties with the Unsigned 99.9 Radio fam, with whom I'm partnered with, and would've been a guest on next week's show so it has hit very close to home.

Like many aspiring young men in the Atlanta area, music is his passion, and much like the masses seeking fame and the spotlight he truly didn't wish to aspire to that mark stating from his interview with Lady Maverik, 'Music is an outlet, I'm not trying to be famous...I want to be a role model'. Chris viewed his music as "Optimistic" hoping it would connect with his audience to motivate and inspire them. His first try with establishing himself as an Artist was at age 15 with his first group Perfect Gentlemen. His first real taste of the music scene in the group was with the Battle of the Bands that he recalls vividly 'the fans cheering and playing along with us!' He also shares with Lady Maverik how much he anticipates coming on the show with Unsigned 99.9 stating he 'planned to rock it' resulting in possible question to listeners to wonder about what could've been. His free-time was centered around making his music inspiring instead of going the violent route glorifying gun usage and killing.

It tears a soul a part to know that our positive thinkers and leaders trying to make the world a better place are taken from us. A close friend to Chris used this devastating time to realize his purpose in music and to continue using his friend as a guidepost. Music is what brings us together. It helps us through our struggles to reach our destinations and ultimately makes us happy and joyful. Chris had the promise of becoming one of the best since he believed within himself he was not going to be just like the rest. During the tribute Dee played two of his songs 'Letters To My Godson' and 'Pictures of You' that will give you the understanding of his mission in music. Can you not envision TuPac in his song "Keep Your Head Up"?

As people I'm sure we all can collectively agree at such a young age it makes no sense for a voice seeking to inspire and motivate to be silenced so violently. Domestic Violence is killing our youth with many probable causes stemming from personal upbringing, anger, hopelessness, and much more. Fastlane Dee covered an array of discussable reasons as to where the cause of such violence comes from and had a guest appearance from Deputy Sheriff Carmen Harris to clarify the signs we all must look out for. We're used to hearing the same tall-tell stories about the abusive boy friend and girl friend relationships that seem to be the popular way of courting these days but sadly that's where many of these cases come from. It also comes from habitual behaviors at home. It's important to not let anyone make you feel less of who you are and even more so stay in a dead-end relationship where you don't feel happy. True love makes you happy inside, not sad nor angry.

Chris had completed his first album Making A Name which will be released on April 13th.

Also paying respects and condolences to another individual Tony Willis, who lost her life while helping a stranded car victim this week. She made an impact at the DMV, for the people in her life, and has equally touched one of the Unsigned 99.9 crew, Fastlane Dee, with her loving heart. May her memory never be forgotten and her purposeful deeds live on.

If you're not in Atlanta, you can stream live online at Love860.com and also on IHeart Radio and the TuneIn Radio App for In The Fastlane With Dee Jackson.

Catch Lady Maverik on her show at Love860 from 6-8am EST and e-mail LadyMaverik@live.com