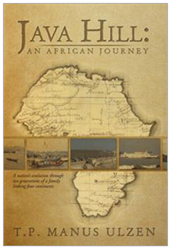 “My curiosity about my family’s historical origins spurred me on, and I found that with each generation, I learned more about the history of the modern nation of Ghana".

What would modern Ghana look like if European colonialism had never occurred? In “Java Hill: An African Journey,” academic psychiatrist T.P. Manus Ulzen shares a genealogical account of his family’s Dutch and Ghanaian ancestry and the role Dutch colonialism played in defining his native country.

Ulzen explores the complex conflicts and relationships between Europeans and Africans in his hometown of Elmina, Ghana through the lens of his ancestors. He chronicles his family’s experiences from the 18th century onward, exploring the inhumanity of the Transatlantic Slave Trade, the onset of European colonialism and the challenges of post-independence Africa.

“I was born in Africa with an uncommon Dutch surname that had been present for many generations,” Ulzen said. “My curiosity about my family’s historical origins spurred me on, and I found that with each generation, I learned more about the history of the modern nation of Ghana."

An accomplished academic and volunteer physician in his native Ghana, Ulzen’s in-depth research into ten generations of his family’s ancestry ultimately linked four continents and provided invaluable insight on the role his surprising European heritage played in shaping his family and his country.

“The story itself is a global ‘Roots’,” Ulzen said, referring to Alex Haley’s 1976 novel. “It shows that you may not be who you think you are."

About the author
Born in the gold mining hotbed of Tarkwa, Ghana, T. P. Manus Ulzen started high school at the age of 10 at St. Augustine’s College, Cape Coast and continued his education in Lusaka, Zambia after his family left Ghana following the 1966 coup. He returned to Ghana to complete his high school education and graduated from the University of Ghana Medical School at the age of 22, becoming the youngest physician in his country. After working as a general physician in Cape Coast, Ulzen left Ghana in 1980 for Canada to begin his specialist training. He completed his post-graduate studies in Psychiatry at the University of Toronto in 1985 and has since had a successful career as an academic psychiatrist. He has been on the faculty at the University of Toronto and East Carolina University and is now Professor and Chair of Psychiatry and Behavioral Medicine in the College of Community Health Sciences at the University of Alabama, Tuscaloosa, Ala., where he is also Associate Dean for Academic Affairs. He is married to Ekua Mensah, a musician and African heritage consultant, and the couple has three children.