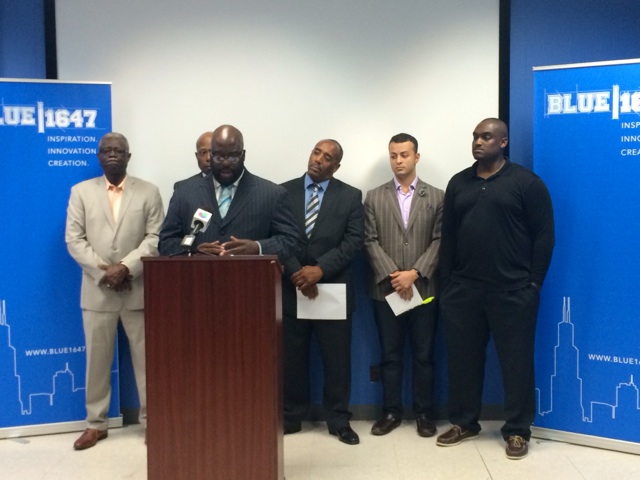 Pastor Roosevelt Watkins (at the mike) Pastor Roosevelt Watkins, national president of MAADD, held a press conference Thursday at the Blue1647, located at 1647 South Blue Island, Chicago, IL, to unveil two new programs. The first program is the Tech Trybe, a “Greek Squad for the community” with the goal to refurbish computers and other devices, which will be resold, and “Community Hackathon,” which will create teams of youth whose goal is to create apps in various categories in an effort to improve employment and reduce crime. (left) Pastor Ruben Coleman, Rev. Dr. Walter B. Johnson, Pastor Marcus Tabb, John Fakhoury, CEO of the Framework Communications and Emile Cambry, CEO of Blue 1647.

The Ministerial Alliance Against the Digital Divide (MAADD) and BLUE 1647 announced a revolutionary partnership that will bring together the Chicago tech community and the faith-based community to develop programs that will focus on Internet access and adoption, tech education and workforce development. These programs are designed to promote technology and 21st century skills in low income and minority communities across the city in an effort to build promising futures and reduce crime. “What we are doing here is ground breaking,” said Emile Cambry, Founder and Managing Director of BLUE 1647. “Never before have the tech communities and faith-based communities come together in such a way to promote technological solutions that can help solve problems that many low income and minority communities struggle with.

We are looking to promote solutions through the use of technology to lower the unemployment rate, crime rate and drop-out rate while providing people with useful skills to build a better future.” Recently, MAADD released a policy paper outlining how technology can be used to provide solutions to many of the societal problems that have created generational poverty in low income and minority communities. This partnership is a first step to implementing these recommendations. “This partnership starts the beginning of an aggressive effort to promote technology as the means for our nation to win the War on Poverty,” said Reverend Roosevelt Watkins, National President of MAADD. “When people are working and see that they have a future, crime rates go down.

By providing people with Internet access and skills training for the jobs of tomorrow, we can bring opportunity to those in need. But for us to fully utilize technology as a means to end poverty, it is critical that our nation transitions the historical analog telephone network to an all-digital IP-based broadband network. This will put opportunity within reach of people living in poverty by allowing continued broadband investment to flow into these neighborhoods.” MAADD and BLUE 1647 have developed two new programs that will launch this partnership: Tech Trybe – Tech Trybe is a “Geek Squad for the community”. The program is set up as a social enterprise where students and veterans learn to refurbish used devices, such as computers, and resell to the community. Proceeds from the sales will provide revenue for students to continue their education.

Through this service, Tech Trybe will provide on-job technical training for BLUE 1647 trainees and provide low cost computers to the local community. Partner churches will be stationed on the south side and west side of the city to provide community members with locations to donate used technology and purchase low-cost, refurbished devices. Community Hackathon – From October 17th to October 19th MAADD and BLUE 1647 will be hosting a community hackathon. The hackathon will be designed around the community issues identified in MAADD’s policy paper that contribute to poverty and economic inequality – Crime, Education, Healthcare, Jobs and Economic Development. Community organizations and government agencies will be asked to sponsor specific problems in these categories that the development of an application might be able to solve. Teams of participating coders will compete for prizes for the development of “best app” in each category. Winning apps will be promoted to be used by participating organizations and government agencies. A copy of MAADD’s policy paper can be viewed at http://www.maadd.org/maadd-policy-perspective/.

ABOUT MAADD: The Ministerial Alliance Against the Digital Divide (MAADD) is a 220,000+ member, next-generation civil rights organization led by ministers devoted to bridging the Digital Divide and promoting economic and individual empowerment in low income and minority communities across the country. ABOUT BLUE 1647: BLUE 1647 is an entrepreneurship and technology innovation center focused on education, workforce development and economic development in technology and 21st century skills.